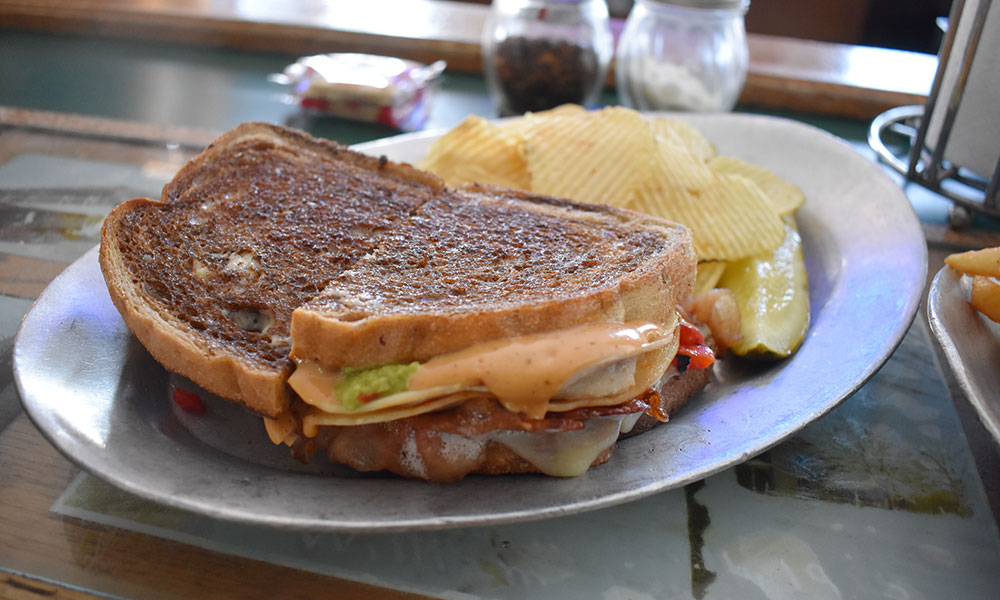 Southwest turkey melt sandwich at Buck’s Family Restaurant, which comes with chips and a pickle spear ($9).

Williamstown restaurant is in season, every season

When pulling into the lot of Buck’s Family Restaurant, 469 state Route 13 in Williamstown, a little eastern town in Oswego County equivalent to a flyover state, whether it was open or not was questionable. One web search told me 11 a.m. and social media told me noon; luckily, it was the former. During snowmobile season, the establishment opens a smidge earlier to accommodate sled traffic.

I walked into the spacious place almost hesitantly, like a trespassing fawn weary of a trap, but was greeted by cordial host/bartender/server Whitney. It was A-OK to eat. While getting situated and making up my mind, I enjoyed a water and a coffee ($2), which I wasn’t charged for. The mug-o-java was a tall one to my surprise and was a good brew. It’s one of those moments when you look down at the cup as if you’re speaking to it and say, “Yeah, that’s a good cup of coffee.” It hits the spot.

The average-sized menu was filled with a bunch of decisions: wings and other classic starters, soups and salads, handheld fare and entrees. Since I cannot say no to jalepeño poppers ($6) and chili ($4.50), they kicked off this heavy meal.

The poppers were deceiving. The crispy-coated cheese-filled peppers were warm to the touch. However, biting into one was a fury hot experience in the temperature sense. Yes, they had a kick, too, but this lesson was learned. As for the food item itself, it definitely met jalepeño popper expectations.

Mama Buck’s chili, which comes served in a crock, similar to the guy who strolls into casual events wearing a tie, was flavorful and hearty with ground beef and sausage. There were also chunks of whole, peeled tomatoes and beans, of course. As it was well presented, it did the job. On the spicy side of things, this medium and leaning toward the mild side chili exceeded my expectations. Mama Buck’s recipe is an honest chili.

Happily warmed up, I made the decision to order three more meals instead of two. After a history lesson and food discussion during appetizer time, I opted for the southwest turkey melt sandwich, which comes with chips and a pickle spear ($9); Buck’s bourbon burger with fries and a pickle spear ($10); and the portobello steak with garlic mashed potatoes ($12). The food came out all at once. By this point a couple entered Buck’s and also sat at the bar. The gentleman exclaimed, “Oh, jeez! When was it the last time you ate? Do you have a hollow leg?” To which I replied, “Last week. I’ve been waiting for this moment.”

It was at that moment my cover was blown.

The southwest turkey melt came with choice of bread, so I opted for marble rye. The large, grilled sandwich was stuffed with deli turkey, bacon, roasted red peppers, guacamole, pepper jack cheese and chipotle ranch dressing. It’s a perfect balance of healthy and unhealthy. The ranch and guacamole seep out with every bite — proof of a stacked sammy. For those not wanting fries, the standard ruffle-style chips are a crispy option. It’s especially true for those folks who stick their chips in the sandwich.

Buck’s bourbon burger featured caramelized onions, bacon, bourbon barbecue sauce and provolone cheese. You can even add more bacon to any burger for $1 more. I wasn’t feeling that adventurous. The sauce was definitely sweet but very good. The burger, which came out more medium to medium-well instead of medium rare, wasn’t bad. It had juicy life to it and wasn’t a messy struggle when eating.

Then there is my favorite: the portobello steak. On top of the grilled mushroom sat a pile of Philly-style shaved steak, onions, peppers and an umbrella of provolone cheese. Balsamic vinaigrette was poured over the top with precision and it didn’t flood the plate. Being one of the four definitive entrees Buck’s serves, this came out on top for this dining out experience. The mushroom wasn’t rubbery. The flavor was high. It paired very well with the garlic and red-skinned potato mash.

For all that food to easily fill four people in one sitting, the bill came to only $45.39 before tip.

From here on out, I’ll be referring to Buck’s Family Restaurant as simply “Uncle Buck’s.” Yes, like the movie. Sure, John Candy isn’t physically present. Sure, they’re not serving up satellite dish-sized pancakes. However, the food tasted home-cooked and you’re treated like family when dining in. You’ll definitely leave stuffed and your wallet won’t be empty.