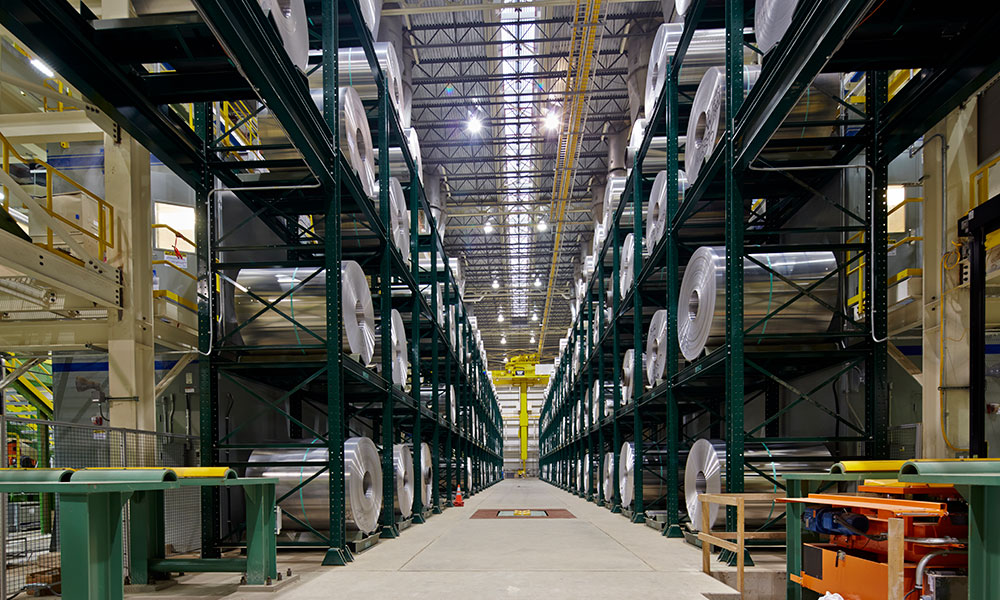 Central New York’s identity has been inextricably linked to manufacturing for nearly two centuries. Buoyed by geography and transportation advancements — first the canals, then railroads and later highways — the area has always counted itself a place that makes things.

Mills and factories once churned out everything from automobiles, air conditioners and televisions to typewriters, window shades and wool.

Workers made salt, chemicals and caskets as well as frozen vegetables, chocolate bars and beer.

But manufacturing jobs in Central New York dwindled as the United States suffered a decades-long decline in the industry.

Wolken is president of the Manufacturers Association of Central New York. The nonprofit represents more than 300 businesses and organizations that employ more than 50,000 workers. In nearly 20 years with MACNY, Wolken said he can’t remember being more excited about the industry’s future.

The long-term decline of manufacturing jobs in the U.S. is well-known, and its drivers — automation and globalization, especially competition from Chinese imports — often discussed.

Less noticed has been the growth in manufacturing jobs in recent years. Since 2010, the sector has added nearly 1 million jobs. That doesn’t make up long-term losses, but it’s a significant achievement. According to the Federal Reserve Bank of New York, it represents the longest sustained increase in manufacturing employment since the 1960s.

And here in Central New York, where many companies have invested in upgrading or expanding their operations, there’s a shortage of skilled workers for manufacturing jobs. Wolken said companies are “desperately interested in hiring” and have made recruitment a priority.

“We have literally hundreds of job openings, thousands statewide, that can’t be filled because people don’t have the skill sets.”

So, what will the manufacturing industry look like in 20 or 30 years when we reach the middle of the 21st century? And how can Central New York remain competitive?

In many ways, the future of manufacturing is already here. To better understand what the landscape will be like, one only needs to look at the changes already under way.

“Manufacturing has changed primarily in the way in which we make things,” Wolken said. “The reality is just much more automated and it’s also using a lot of high-tech skills.”

Other industries, such as agriculture, have undergone similar shifts, relying more on technology and automation to increase efficiency and production. There are few low-tech manufacturers now and, in the future, they’ll be virtually nonexistent, Wolken said. A sign of the shift is evident in a fact from the Federal Reserve Bank of New York: manufacturing output has increased even though employment in the sector is a fraction of what it was in the 1980s.

In some ways there’s a disconnect between the public’s idea of manufacturing today and the reality. Modern manufacturing facilities in Central New York bear little resemblance to the loud, hot and dirty factories of the 20th Century.

“If you get a chance to walk through them like me you’re utterly impressed by how they make things,” Wolken said. “The hand assembly days are over, nobody does that.”

It’s not uncommon to see automated fork trucks zip by in a plant now. And tools that might not have been present in factories even a decade ago — advanced robotics, artificial intelligence and data analytics — are becoming commonplace.

In the future, Central New York will likely continue to have around 8%-9% of its workforce employed in manufacturing, Wolken said. But that workforce will be more educated and skill-oriented. Manufacturers will continue to produce a constellation of products here, but it will be done with intelligent machines and highly-skilled workers.

In addition to the trends toward automation and broader skill sets, Central New York is likely to see new kinds of companies making different products, said Patrick Penfield, a professor of supply chain practice at Syracuse University. Some of the larger manufacturers that have historically anchored the region are likely to be replaced by smaller companies focusing on making niche products.

“You’re going to see small, I think, specialized types of manufacturing in this area,” Penfield said.

Manufacturing will rely even more heavily on skilled workers than it does now, but finding those workers has been a challenge.

As Central New York’s aging workforce retires, companies face the task of replacing them as well as filling new positions. Several reasons account for the difficulty in finding and hiring workers. One issue is that many young people never consider a career in manufacturing because they have little understanding of what modern manufacturing looks like.

“That’s part of the challenge,” Wolken said. “For so long people have driven by manufacturing facilities and they have no idea what people are doing inside.”

Young people preparing to enter the workforce often don’t realize that entry-level jobs in manufacturing are available and tend to pay significantly more than comparable positions in the hospitality and service sectors and often include benefits. Consequently, they neglect to develop the skills needed for those types of jobs.

“These are highly technical jobs,” Wolken said. “And if people don’t prepare for them and train for them, they’re not going to be able to get them.”

For some positions, companies will provide most if not all of the needed training. But in many cases a high school degree is required as well as additional training or learning. That could include an apprenticeship, a community college program or special certification.

MACNY has several initiatives aimed at attracting young people to manufacturing. Wolken said it’s important to start talking to students early through career awareness programs. If students learn about opportunities sooner, they can take courses in high school that will prepare them to get a job when they graduate.

One example is the New York State Pathways in Technology (P-Tech) programs, which creates a public-private partnership to prepare high school students for high-skill jobs in technology, manufacturing, healthcare and finance.

Students eventually earn an associate degree at no cost and are first in line for jobs with participating companies when they graduate. MACNY supports six P-tech programs and is starting a pre-apprenticeship program with the Syracuse schools that will allow students to begin apprenticeships before graduation.

Wolken said that with the appropriate skills and experience — through an apprenticeship, community college or other program — many students can enter the workforce on track for jobs that pay $25-$30 an hour plus benefits.

If the manufacturing workforce of the future will be highly skilled and trained, what kinds of things will they make?

Wolken said higher-end products that have technology built-in or require skilled, technology-savvy workers to produce will likely be manufactured here. He cited the fields of biotechnology and nanotechnology as well as radar systems.

He said an example in Oswego County is Novelis, with its focus on recycling and premium aluminum products for the automotive and beverage industries.

“The technologies that are driving the future of both products, energy consumption, recycling, these are all things that we want to do as much as we can locally because of their high wages and because those jobs are here to stay,” Wolken said.

While manufacturing in the future will largely be shaped by long-term trends already under way, Penfield and Wolken say the pandemic caused by the coronavirus will cause changes in manufacturing going forward.

“It’s really exposed a lot of our weaknesses in certain industries,” Penfield said. “We realized through the pandemic that we’re very exposed from a supply chain standpoint because we’re very reliant on other countries to make things that are critical to our survival.”

The shortages and disruptions during the pandemic are encouraging companies to shorten their supply chains and localize production where possible. That could mean a significant reinvestment in American manufacturing, Penfield said, particularly in areas that pay workers high wages and generate economic growth.

It remains to be seen exactly how government policy post-pandemic might affect production of certain items in the future. Penfield said it’s possible certain industries could be federally mandated to manufacture their products in the United States out of health, safety and security concerns. He cited pharmaceuticals, computer chips and defense contracts.

Since 2010, the manufacturing sector has added nearly 1 million jobs. That doesn’t make up long-term losses, but it’s a significant achievement.

But how can Central New York remain competitive to ensure high-paying manufacturing jobs in the future end up here?

Part of that question will depend on New York state making wise policy decisions that encourage growth in manufacturing. Wolken said policymakers need to understand that manufacturers will only make their products here if they feel there’s a strategic advantage.

“The dilemma we have here in New York is that our taxes are high and we’ve got a lot of regulations,” Penfield said. “We’ve got to figure out what makes sense for us from a state standpoint to attract and help businesses grow.”

Grants and other support programs may be necessary to help existing manufacturers survive and to lure companies to the state, especially in emerging industries. It’s wise for the state to make these kinds of efforts, Penfield said. When manufacturers move to the area they generate wealth that lifts the entire region.

“But the state has to have that type of vision and think that way,” he said.

In the past the state has pursued economic development aggressively, but turned in a mixed record, Penfield said.

For example, the state’s Empire Zones and their lucrative tax credits were panned as an enormously expensive quagmire.

New York has also erred in trying to create industries and jobs, rather than making policy decisions that lessen tax and regulatory burdens where possible and encourage companies to grow, Penfield said. Such was the case when the state spent millions of dollars trying to create a film industry in Central New York, but ended up creating few jobs.

“We get in that trap where the government thinks it can create jobs and I think that’s always the wrong approach,” he said. “Don’t try to create the industries, have the industries come to us.”

As manufacturing jobs continue to shift from low skill to high skill positions, Central New York will need to leverage its human resources. For example, Wolken said, the region has a quality education system at the secondary and collegiate levels, which gives it the ability to develop talent, which is an advantage.

“A lot of companies don’t want to move because they can’t get their people to move with them,” Wolken said. “So, it’s hard to say I’m going to shut down my facility. Now over time they can stop investing, that’s different. But to literally just pick up and move?”

Encouraging companies to continue investing in their operations in Central New York will be crucial. And a workforce of highly skilled people will be important in anchoring companies here long-term.

One of the greatest concerns manufacturers have is being able to find and keep skilled workers, Wolken said. Maintaining their labor forces will be even more important for companies in the future. The average factory worker is in his or her mid- to late-50s.

“Someone else will give them a plot of land, maybe even give them the whole facility or a lot of it at an inexpensive cost, but it is people that make that stuff run,” Wolken said. “Workers are not just interchangeable anymore.”