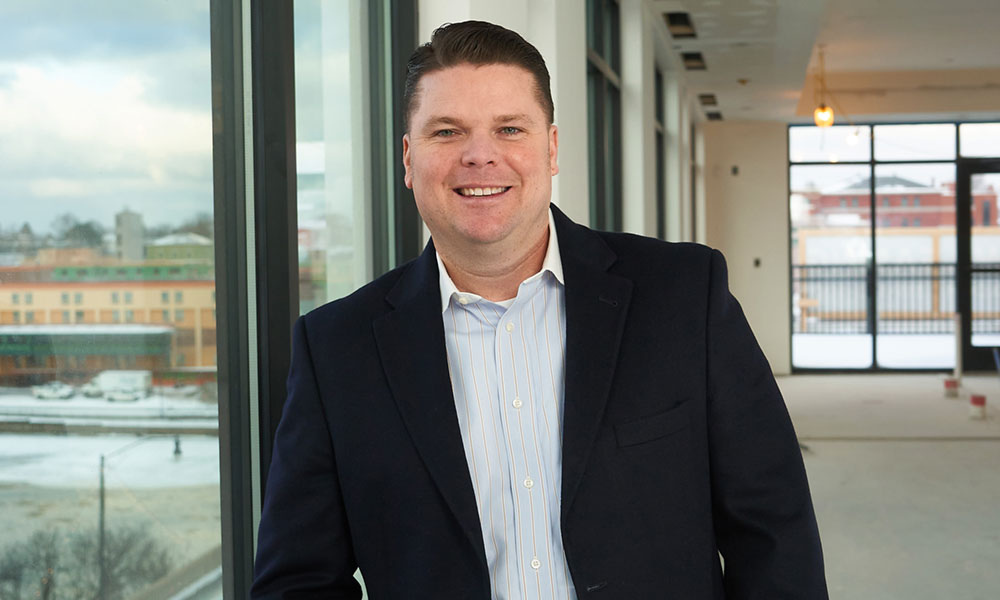 Atom Avery celebrating the completion of his most ambitious project to date, the Litatro building in the heart of downtown Oswego

An entrepreneur is inherently a businessperson who is willing to take on greater than normal financial risks in order to complete a project or endeavor.

This is a person who possesses the innate ability to organize, launch and operate a business in a highly efficient and profitable manner.

For area entrepreneur, business manager and real estate developer Atom Z. Avery, that spirit of entrepreneurship may very well be embedded in his DNA.

Since 1999, Avery Rental Properties has provided housing for families, business professionals and students while also becoming engaged in transformative property development projects in the city and county of Oswego.

His maternal grandfather, J. Francis “Zeke” Vona, and his great-uncle John joined in operating Vona Shoes in Oswego for many years, while great-uncle Thomas founded Vona’s restaurant on West Utica Street in 1947.

The Vona brothers were significant contributors to the Oswego community in many ways, and their progeny now carries on that legacy.

“We’ve always had a sense of business in our family,” he said.

“I definitely aspired to owning properties and buildings. The business aspect in terms of running the different businesses that I own now, however, I didn’t know was coming,” the Oswego native said. “It’s been a fun ride, though, and I like challenges.”

His father Richard worked at and retired from the James A. FitzPatrick nuclear power plant in Scriba when it was owned and operated by the New York Power Authority.

His mother Loretta also was engaged in business ownership in both the service and retail sectors in Oswego.

Avery has a passion for the risk-taking that runs hand-in-hand with entrepreneurship.

“Those are the things that make me tick for sure,” noting he gains fulfillment by putting the right teams and deals together, whether it is with partners or investors.

From energy to entrepreneur

Prior to calling his own shots, Avery worked for Entergy — former owner of the James A. FitzPatrick nuclear power plant — for 11 years as a union steward.

“Believe it or not, being out there and learning the corporate structure helped my career as an entrepreneur,” he said.

As part of Entergy’s security department, Avery learned to understand personnel issues, policies and procedures, as well as patience, particularly when working with the federal government.

“Being a union steward gave me a good look at how people think and work together,” he said.

Prior to that, Avery was engaged in residential real estate and worked with property developer and landlord Thomas Tesoriero while gaining significant support from his parents as well as his in-laws.

“It’s really been a family affair my whole entire career,” he said.

The jump into being his own boss was relatively seamless for Avery and his wife Falecia.

“My wife and I knew that [working at FitzPatrick] was not a long-term path for me,” he said. “So anytime I got a raise out there or increase in pay, we basically put it toward our 401K at the time or toward direct payment on one of my mortgages.”

When he did decide to resign, both he and his wife were taking home about $115 every two weeks.

“We weaned ourselves off my payroll out there,” said Avery, noting that buying properties and advancing his real estate business enabled the couple to do so.

Falecia graduated from SUNY Oswego in 1999 with a degree in human development and a minor in art and conflict resolution. She worked for the City of Oswego Water Department before having her first child in 2002.

“Since then I’ve been a domestic engineer and Atom’s partner in every endeavor. I ebb and flow in and out of projects where needed while also trying to be the constant at home for our children,” she said.

He said being able to provide for his family while building his business outside of the FitzPatrick environment was a key to his success.

In 1999, he purchased his first house at the age of 19 thanks to Pathfinder Bank and his dad, who co-signed for a loan.

Before he worked for Entergy, he owned two properties featuring eight rental units.

Over his time with the company, Avery would significantly grow his portfolio to be able to execute an exit plan and work on his own.

“The running joke honestly in our family was, ‘Right after this, I can resign. Or right after I buy this, get this project done or get this fixed up, we’re done. That’s enough,’” he said.

The fulfillment comes from always trying to leave things better than how they were found, he added.

“What happens is doors open, opportunities open, and it becomes, ‘OK, are we going to do this? Does it make sense for us right now? That’s how it goes,’” Avery said.

He said most people who get into real estate start with small residential properties.

“That’s exactly what I did. As we grew, we would introduce different team members, such as in accounting and maintenance,” he said.

“At first, you do it all yourself,” Avery said. “And then you get family and friends to help you. As you get bigger, you have to hire people to maintain the level of quality that you want.”

Avery said he has been blessed with an “amazing team” that includes office manager Sue Henry, who “just knocks it out of the park for me.”

“It’s so critical to have people that you can rely on. People really make a business successful; it’s not just the investment, it’s the people putting in the time,” he said.

Avery noted that evolving technology has transformed the property development industry with resources such as QuickBooks and electronic signatures streamlining processes, while the ability to use Zoom video conferencing and FaceTime is more important now than ever.

Social media has also changed the game over the last decade or so, Avery said, noting he uses a local company owned by Robert Ruggio — WEBGIO — to handle his website, social media and some back office functions.

Besides his rental properties business, Avery oversees the day-to-day operations and management of several properties and businesses, including the new Litatro Building; Beacon Hotel; 5 Points Wine and Liquor at 1 Washington Boulevard at the forks of the road in Oswego; and The Gardens By Morningstar.

The Gardens is co-owned and operated with local entrepreneur Joseph Murabito. “It has been a challenge with COVID-19, but we are up and running and going strong. It’s just a scary thing,” said Avery in regards to dealing with regulations involving the global pandemic.

Avery said partnering with Murabito, owner of Elemental Management Group in Oswego, is beneficial from both a personal and professional standpoint.

“Our families get along, and while our mindsets are a little bit different being that we come from different angles, we complement each other’s leadership skills,” he said.

“Having those businesses to collect information from is phenomenal,” Avery said.

Avery’s signature project to date is the five-story Litatro building at West First and Bridge streets in the heart of downtown Oswego.

Litatro features 20 luxury residences as well as retail and commercial space, underground parking, Southern Fare Restaurant on the first floor as well as rooftop deck that will be transformed into a destination place featuring “world-class eats,” Avery noted.

The project received tax incentives through a payments-in-lieu-of-taxes agreement with Oswego County; the state helped with $1 million in Downtown Revitalization Initiative funding; and Pathfinder played a role with key funding as well.

He said the city was user-friendly in terms of making the building process as smooth as possible. “This was everybody’s project — not just Atom Avery’s or Falecia Avery’s or our project,” he added.

“It was fun. When everybody is working toward the same goal, it makes anything fun,” he said.

Litatro is actually an acronym meaning “Luck Is The Ability To Recognize Opportunity.”

“He used to have all these sayings and lines, and one of them was ‘luck is the ability to recognize opportunity,’” Avery said.

“People oftentimes say, ‘Oh, you’re so lucky!’ But the bottom line is, chances are they are not lucky. They just took the opportunity that was presented to them and did something with it,” he added.

“It’s not about luck. If you don’t like something in your life, change it,” he said. “It’s true even in relationships. If you’re unhappy, you need to work on it and change it. It’s the same in business, life and everything.”

This year, Avery will set his sights on launching the operational portion of The Maples Adult Living Community while balancing his focus on the upcoming rooftop bar at Litatro.

Woven into the fabric of his entrepreneurial spirit, Avery’s driving force has always been to give back to the community in which he knows and loves. In doing so he is proud to serve on the board of directors for the Oswego County Federal Credit Union in addition to being chairman of the board at Oswego Health.

The completely remodeled facility is expected to open this summer. While the aforementioned Joseph Murabito is not an equity partner, he does participate on the management side.

Avery mentioned he is looking forward to working with Elemental and an opportunity to glean perspectives from several leaders.

There was discussion during the early stages of planning at The Maples that a wing specifically designed for treating COVID-19 patients would be created.

However, that looks all for naught at this point, Avery said.

“It doesn’t look like it is needed obviously with the vaccine,” he said.

“It’s probably a blessing in disguise that the timeline didn’t work out pre-COVID-19,” said Avery, noting it would have been challenging to open and launch a communal living environment at the height of the pandemic in 2020.

“But we are looking forward to better times for sure,” he said.

He said the business does its best in keeping with constantly changing COVID-19-related regulations administered by the Centers for Disease Control & Prevention and the New York State Department of Health.

For Avery, his wife Falecia is “my start-up, go-to person, and what I mean by that is she wears many different hats and always has, whether it’s helping with furnishings or picking out finishes. That’s her area of expertise,” said Avery, noting his wife also keeps a tight rein on interior budgeting.

“She steps in to help get the businesses launched, and then she steps out and goes back to what she enjoys, which is raising our family and being at home,” Avery said.

Aubrey is a college student who already owns property and is getting into real estate.

“We go through ebbs and flows of too much work and too much play sometimes. Finding that balance is important,” he said. “Sometimes you have to make an appointment to have a date night” and view family as an equal priority.

The family enjoys vacationing together and summers at its camp in Fair Haven.

“We always raised our kids in an environment where our kids’ friends want to come and be in,” he said.

“I want my children to be happy, engaged in a healthy life and relationships, and do what their hearts desire,” Avery said.

“I have no true dreams that my children will do what I do,” he said. “Maybe I think that way because I bought a lot of property from a lot of people whose parents may have passed, and they didn’t want to do it. In my mind, I’m not holding anyone accountable to do what my wife and I have done.”