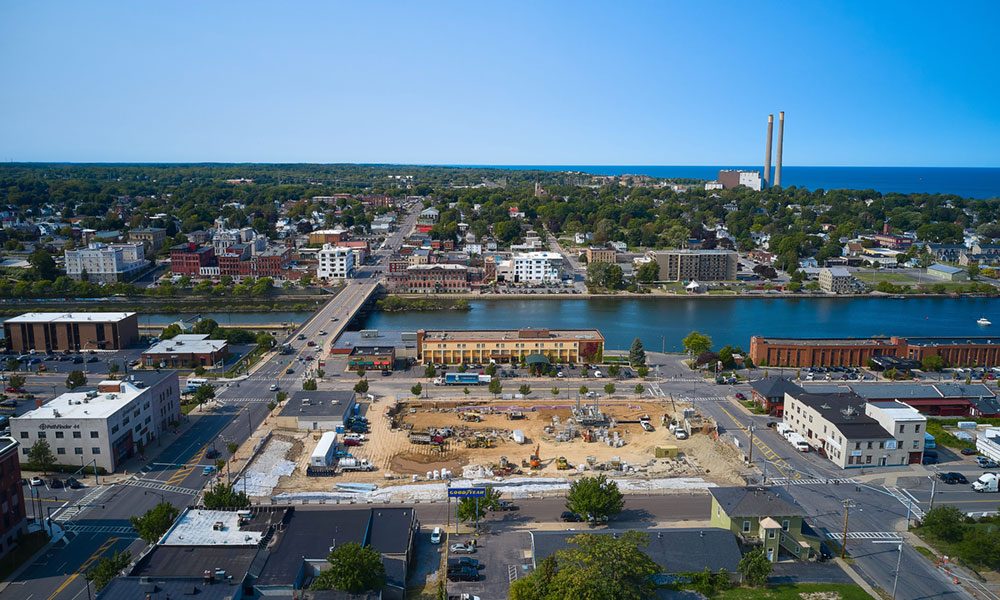 It’s a renaissance. The city of Oswego is undergoing a significant transformation as its landscape is being renewed by several major commercial projects.

Buoyed by both public and private funding, the projects are expected to make a considerable impact on the city from a quality of life and economic development standpoint.

Funds garnered through the state’s $10 million Downtown Revitalization Initiative several years ago proved to be the catalyst for the surge of projects.

For city of Oswego Mayor William “Billy” Barlow, the unparalleled progress is gratifying but is all part of the plan.

Activity impacts several sectors of the local economy. The Litatro building, Riverwalk/22 Crossroads, Harborview Square and East Lake Commons will all feature additions to the retail and housing sectors.

Meanwhile, renovations at Oswego City Hall will preserve a vital resource in the government sector.

Barlow said the primary goal of the downtown revitalization plan was to leverage private investment into the core downtown area.

“And that’s precisely what is happening,” he said. “The development taking place in and around our downtown fills in previously vacant or underutilized land. These projects are introducing quality living units to our downtown and creating more activities and new attractions to the area.”

Barlow is in his second term as mayor after running unopposed last year.

He said a major goal of his second term is to see the downtown projects come to fruition.

Atop the agenda are plans to rebuild and transform the city’s waterfront, which is under way and proceeding as expected. Another major priority, Barlow said, is to maintain the city’s “strong and aggressive” code enforcement program, holding landlords accountable for their property while creating and retaining value in city neighborhoods.

A $16 million waterfront project at Wright’s Landing Marina on the city’s west side is geared to boost fishing, boating and related tourism activity.

This will be the first major renovation to Wright’s Landing since it was built nearly four decades ago.

The marina’s height was recently lifted as it undergoes a reconstruction process to avoid future flood damage from Lake Ontario.

During the past few years, the city has experienced unprecedented levels of flooding, causing significant damage to the shoreline and marina.

The project is slated to be complete in June of 2021.

“By creating downtown living units, you automatically introduce people into our downtown and that will bode well for downtown restaurants and businesses,” Barlow said. “The constant presence of people will create the need for more activities and events and presents many more opportunities for businesses in downtown.” 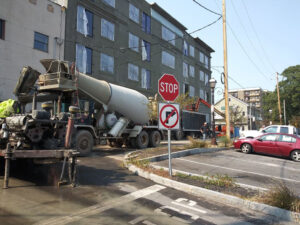 The mayor said some projects also make downtown more viable in terms of being a destination.

“We’ve already noticed a sizeable uptick in people coming in from other areas to see our improvements to Brietbeck Park and the marina,” he said. “I think projects like the Children’s Museum of Oswego, the Lake Ontario Water Park and some of the specialty businesses coming into the new buildings will bring more positive attention to our community.”

A taste of “Southern Fare” is coming to the first floor of the Litatro Building, located at the intersection of West First and Bridge streets in the city.

A new fusion cuisine restaurant, Southern Fare, is one of two occupants planned for the commercial space. It will be a 60-seat, full-scale bar and cookhouse.

Residential space on the four floors above will become available in November and December and early 2021. 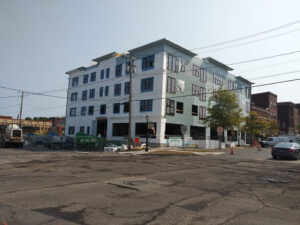 Meanwhile, the Riverwalk/22 Crossroads project, located at the intersection of West First and Cayuga streets, is also proceeding according to schedule and will also feature commercial space on the first floor and residential space on the three stories above.

Barlow said the project will be completed in 2021 and is going to greatly improve the West First corridor north of state Route 104.

He said businesses using the commercial space will generate foot traffic in an area of downtown that previously hasn’t been quite as busy as other areas of the city.

The $26 million mixed-income, mixed-use Harbor View Square project on West First Street in Oswego will feature a five-story structure containing 57 rental units and three two-story structures with 18 town homes. There will be 10,000 square feet of retail and commercial space as well.

According to Barlow, the town homes are completed and beginning to be leased with an opening expected soon.

He noted the five-story building went up quickly over the summer and work has shifted to the inside of the building.

The development replaces a large empty parking lot and the secondary Department of Public Works garage.

“It’s an important development because it helps connect our marina and maritime district to our downtown,” Barlow said. “As our marina projects take shape, this project will be a major conduit and we’re working hard on identifying a commercial tenant to occupy the space.” 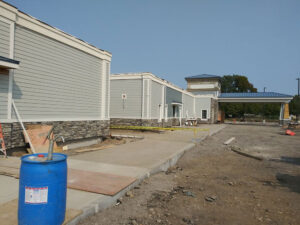 The Lake Ontario Water Park, which is attached to the Quality Inn & Suites on East First Street, is close to completion.

“The exterior has been done and they are working on the interior, installing the features and putting the place together,” the mayor said. “The water park is going to be bigger and better than anyone is expecting and has been a popular project quietly moving along.”

Barlow said to expect the facility to open either late this year or early next.

“The final product will be an enormous asset to our community,” he said.

Broadwell Hospitality Group is constructing the 16,000-square-foot indoor facility that will include many pools and water assets. The facility will merge into the existing hotel, transforming several hotel rooms into party rooms, arcades, and exercise facilities. GS Steamers Restaurant will be incorporated into the water park.

Only memories remain of Midtown Plaza, a once-glorious 1960’s urban renewal project located at the corner of East First and Bridge streets in Oswego.

New to the city will be East Lake Commons, a 75,000-square-foot mixed-use commercial and residential project in the heart of the city’s eastside business district.

The plaza has been demolished and crews are cleaning up the site before construction begins. Once the site is cleared, construction will begin with the goal of a late 2021 or early 2022 opening.

“This project will bring some economic activity to the east side of downtown,” said Barlow, noting that work has began on the inside build-out.

‘Before, Oswego was known as an awful place to do business. That’s a fact. Now, property owners, business owners and developers say it is so easy and a pleasure.’ 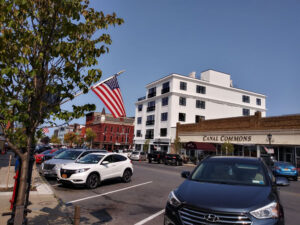 sted on the National Register of Historic Places in 1973, the 150-year-old Oswego City Hall is receiving a facelift with the installation of new gutters, a partial rebuild of a deteriorating wall and repairs to the roof and bell tower.

“The project is moving along really well as the clock tower has thankfully been stabilized, the roof has been replaced, the re-pointing of stonework continues and the re-building of the south side wall, a major part of the project, has started,” Barlow said.

He said the scope of work, budgets and schedules are extremely difficult in managing when it comes to projects involving historic buildings like Oswego City Hall, “but so far everything is on track.”

Oswego Common Council meetings have been relocated being the current chambers are being reconstructed.

“It’s great knowing the work we’re doing now will preserve this building for generations to come,” he said.

“We have to keep progressing. If you’re not progressing, you’re falling behind,” he said. “If developments aren’t taking place, if improvements aren’t happening, if there’s no forward movement or investment taking place in a community, you’re losing ground to other regions of New York state and beyond.”

Barlow said that over the last five years, and particularly the last two, he has learned that people gravitate toward momentum.

“People notice positive change, they notice improvement, and then they want to be a part of it,” he said. “We’re seeing that already with downtown. There’s unprecedented investment taking place, buildings are going up, development taking place and jobs are being created.”

He said residents are going to be introduced to a revived downtown that will spark more economic activity.

“Other people will want to get in on the action,” he said.

Meanwhile, existing small business owners in the city are doing improvement and expansion projects. Upgrades at Oswego Cinema 7, Gibby’s Irish Pub, Stone’s Candies, Man in the Moon Candies and many other local businesses have helped fuel the momentum occurring downtown. 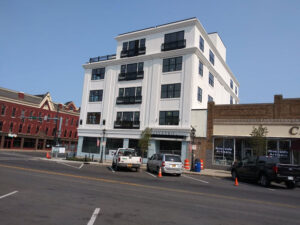 The former Schilling Block on West First Street, which is adjacent to the Water Street Square Park, is also undergoing significant restoration under the guiding hand of owner Warren Shaw.

The city also launched its Downtown Improvement Fund projects, an initiative that is one of the 12 DRI projects the city launched in 2016.

The DIF is designed to help small businesses and downtown property owners fund smaller projects that the initial DRI award did not fund and to encourage additional investment.

“Some of our smaller signage, awning and improvement projects for existing businesses are now ready to go,” Barlow said. “So, I think what we’re seeing now is just the beginning. Once some of the economic benefits of these large projects take place, once they open, you’ll see the spark return to downtown.” 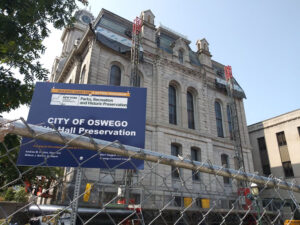 In order to sustain this high level of progress occurring in the city, Barlow said it is vital to keep people engaged — from property owners to stakeholders to the general public.

“Our projects and developments have had major hurdles, like COVID-19 for example,” he said.

As a result of the global pandemic and ensuing economic shutdown, adverse financial implications and a shortage and delay involving materials and equipment hit the city and region hard.

“But you manage, work through it, call audibles, make adjustments and keep moving,” he said. “Stopping or delaying isn’t an option.”

“The clock on my term as mayor is ticking and I’m known to be perhaps too aggressive, but to me it’s required if you’re interested in getting things done,” he said.

“It’s been a true team effort and if people only knew all that goes into these projects, they’d appreciate them much more,” he said.

Barlow said the city’s efforts under his leadership to streamline and simplify the building and permitting process is paying dividends.

“Before, Oswego was known as an awful place to do business. That’s a fact,” he said. “Now, property owners, business owners and developers say it is so easy and a pleasure.”

He noted existing Oswego business owners frequently remark on the difference in quality and experience.

“If they had a project years ago, they have terrible stories to share. Now, they thank our staff for the assistance,” he said. “We have out-of-town developers telling us it is the easiest and best system and staff they’ve worked with. And you’re seeing the benefits both commercially and in residential investment.”

He said people are not hesitant anymore to come to City Hall to acquire a building permit to do a project.

He said anchoring code enforcement efforts are director Curt Miller and permit administrator Jeff McGann, both of whom have private-sector experience and “get it.”

“Jeff was a contractor so he understands the process from the other side and that’s important,” Barlow said. “Typical bureaucrats don’t understand or value schedule, budgets, or time variables, so we developed our office around people who’ve lived it.”

When Barlow first meets with a business owner or developer, they make the decision the project is going to happen.

“I then afford them all the services of city government,” he said.

He said he wants to know immediately of any problems or delays in order to rectify them and get back on course.

“That’s the way it should be. Nothing is impossible and everything can be overcome,” he said. “There’s no reason to make things harder than they need to be.”