It’s always a bummer to see a restaurant come and go. Although Alex’s on the Water vacated its spectacular waterfront location at 24 E. First St. in Oswego, La Parrilla is maximizing on its gain.

I enjoy comparing this location to Collision Bend Brewing, which is located in Cleveland, Ohio. Although this Oswego eatery isn’t a brewery and strays away from creative pub fare, this Central New York harbor city boasts that big city vibe, all the while sitting on the river and across from an outdoor stage where music can be clearly heard. There’s a balance of activity and relaxation. Blame it on the water?

The spiedini alla Romana ($13) is not your grandparents’ cheesy bread. This loaded, toasted baguette comes topped with mozzarella and pecorino cheeses, garlic, and capers sits around a cheesy white wine sauce. Crispy on the outside and soft on the inside, the slices of bread are bound with stretchy mozzarella, unwilling to let go. To go along with the cheese, the capers, or “mini salty bombs,” kick up the flavor. For those not a fan of capers, there isn’t an egregious amount and complement rather than overwhelm.

It seemed like an easy decision to make a dive toward the mussels in tequila ($14). Described as tequila-flamed, the pile of mussels sits in a savory bath of chipotle cream sauce with bits of clam and celery. This easily shareable antipasti or small plate, boasted two semi-gritty mussels. Although an official tally wasn’t counted, that ratio is really favorable. And the grittiness wasn’t wince-inducing. 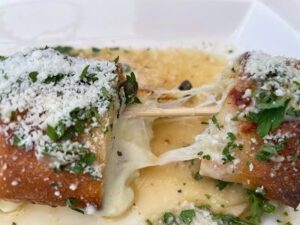 The mussels come with a baguette, because that sauce shouldn’t be wasted. In my honest opinion, the flavor is pretty unbelievable. The smokiness and confident kick of the chipotle presents itself in style. With the bits of clam and veggie to boot, it could stand alone as a soup.

And speaking of soup — the big Mac soup, the special of the day, is something to talk about, too. With each entree, prepare to choose a side soup or salad. With the two entrees, I tried each. Alone, the soup of the day is $6, but this was included with the entree. My awesome, personable server Mara boasted the clam chowder, but something pulled me to try the soup du jour because it’s truly a big Mac in a bowl.

When trying it, I did say an expletive, which won’t be repeated here. However, it did taste like a big Mac. Although the time since I’ve enjoyed a big Mac has been at least 15 years at this point, this soup brought me back. The flavor was unmistakable but this soup, obviously, had better ingredients.

And, one other thing to note: this so-called side of soup is a regular bowl of soup. It’s big and easily shareable.

Sorry, side salad. Although, its size was as expected (still, a good size) and the veggies were vibrant in color and crispy, it was second chair. Still — lots of love to you.

For risotto fans, the familiar and time-consuming dish changes daily. For this sunny Saturday, La Parrilla served up mushroom and roasted red pepper risotto ($18). The cost varies, depending on market price. The heavenly, heavy, and hearty dish was creamy and as light as risotto can be. If it were chocolate, it’d melt in your mouth. The wonderful team of mushroom and roasted reds with cheese harmonized in flavor.

Last but not least, the monster entree of the meal: the pork Milanesa napolitana ($20). How this is only that much money is beyond me. This generous-sized breaded, crispy, and tender pork sits on a generous bed of lightly salted steak fries. It’s also topped with ham, tomatoes, herbs, marinara sauce, red pepper flakes for a subtle kick, and cojita cheese. The cheese is a light, crumbly cheese is similar to feta, but the Mexican version.

It’s a very big entree with very big flavor. It seemed a lot while reading it, and it met expectations. To see it in person felt extra special in itself.

La Parrilla filled my stomach and my expectations.

The restaurant, in its prime location, is something to take note of and visit as many times as you’d like.

It’s also speaks for Oswego in itself, a small little city that gets tastier with each visit.

La Parrilla on the Water

Goal at the Hannibal Farm is to Sell 1,000 Christmas Trees This Season