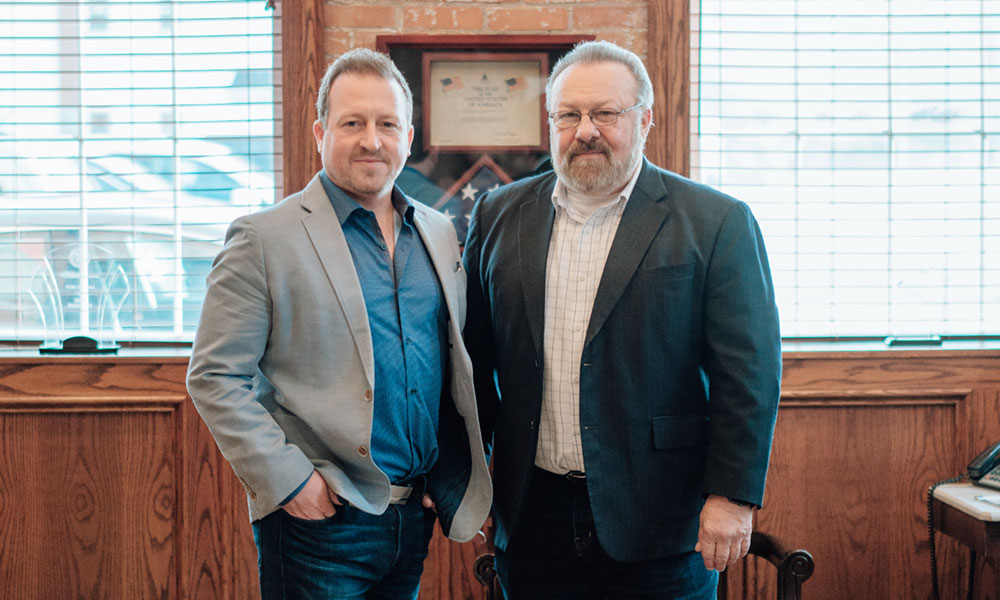 Vincent “Vinny” Lobdell Jr., HealthWay’s president, and his father, Vincent Lobdell Sr., who serves as CEO and chairman of the company

Tens of thousands of HealthWay purification systems have been placed in the New York City School District, the largest school system in the country, in the Chicago Public Schools and hospitals around the country, including Upstate, Crouse and Oswego in Central New York.

You can find them in hospitals, daycare centers and offices. Tens of thousands have been placed in the classrooms of the nation’s largest school systems and on buses too. They’ve even been shipped to China, Italy and the United Arab Emirates.

And it’s all the work of a family-owned company in Pulaski.

A year ago, HealthWay Family of Brands was a small but fast-growing business manufacturing medical-grade air purifiers. But since the pandemic began, it’s experienced soaring growth as demand for its products has skyrocketed.

The company, which has a significant workforce overseas, employed roughly 40 to 45 people in Central New York before the pandemic. They added 60 employees here throughout 2020 to keep up with demand and plan to hire another 50 to 60 in the first part of this year, Lobdell says. Those jobs will include positions in manufacturing, engineering, marketing, sales and finance.

In some ways Lobdell and his father, Vincent Lobdell Sr., who serves as CEO and chairman, have been preparing their company for this moment for years.

“With my father and myself, we spent the greater part of three decades pursuing something we believed in with the idea that eventually it would be something the world would open its eyes to,” Lobdell says.

In 1981, the elder Lobdell went into business developing air filtration systems. He began by building products in the air quality space for other companies, focusing on business-to-business sales. In 2004, father and son started HealthWay with a single employee. Most of its sales were still business-to-business. As they expanded their line of air cleaning systems in 2016, the family opted to open a plant in Pulaski rather than China.

In 2017, HealthWay launched its Intellipure brand and began marketing and selling its products to consumers. The company was growing at a rate of 7% to 10% and continuing to invest and innovate when the pandemic hit, Lobdell says.

HealthWay’s air purifiers use a patented disinfecting filtration system (DFS) technology that the company says is 40 times more efficient than HEPA filters. Its products have not been certified by regulators to remove the virus that causes COVID-19, but previous tests showed their filters remove 99.99% of the H1N1 virus, which is smaller than the current virus.

The company’s air purifying equipment ranges from smaller portable air purifiers that can be set up in a single room to commercial filtration systems meant for large buildings.

“I think a lot of experts would say we had innovated and put ourselves in the position to really be the only global air cleaning manufacturer to have a solution from a small bedroom to a large skyscraper,” Lobdell says. “And I think that’s why we’ve been able to capture this opportunity.”

Lobdell says he and his father have invested years in finding a meaningful solution to air pollution, which the World Health Organization has said poses a major threat to public health. But people tend not to worry about things they can’t see and Lobdell says it has taken the pandemic to open the public’s eyes to the deadly threat of air pollution.

“We’re really about providing true solutions,” he says. “We have innovated and put 30 years of investment and effort and hard work into this space. A lot of times that doesn’t pay off on a balance sheet right away.”

Their work has resulted in a product line that is both scalable and adaptable. As an example of the benefits, Lobdell cites school districts, which are often located in older buildings.

“You can’t adapt a commercial air cleaner to the HVAC system, so they went with small portables,” he says.

In 2020, HealthWay deployed more than 200,000 portable air purifiers to classrooms in schools across the U.S. Tens of thousands of purification systems were placed in the New York City School District, the largest school system in the country. Many major school districts in the nation have adopted HealthWay’s purifiers. Nearly 30,000 units were placed in the Chicago Public Schools alone. Hospitals around the country have also used the purifiers, including Upstate, Crouse and Oswego in Central New York.

HealthWay’s products also went abroad. In December 2019, the company was called upon to collaborate with healthcare institutions in China to help combat cross-contamination. Its systems were later used in field hospitals in the United Arab Emirates and then Italy when the infection rates spiked in those countries.

The demand for HealthWay’s products doesn’t show signs of letting up anytime soon. Lobdell says sales this year are likely to exceed 2020. The company has a backlog of almost $30 million in revenue and pending deals of upwards of $100 million in sales.

“Growing the business is great,” Lobdell says. “But being able to provide something that really matters during the worst health crisis in history has been something we’re really grateful for and proud of.”

He praised the commitment of the company’s employees around the globe who committed to working round the clock to provide help combatting the pandemic.

Nor have the events of the last year caused the company’s owners to rethink their decision to invest in Pulaski.

“We’re committed to the local community,” Lobdell says. “We could really move our business anywhere, but the community matters so much to my father and myself. We’re so grateful to represent and support small town America and most importantly Central New York and that’s why we continue to invest here.”