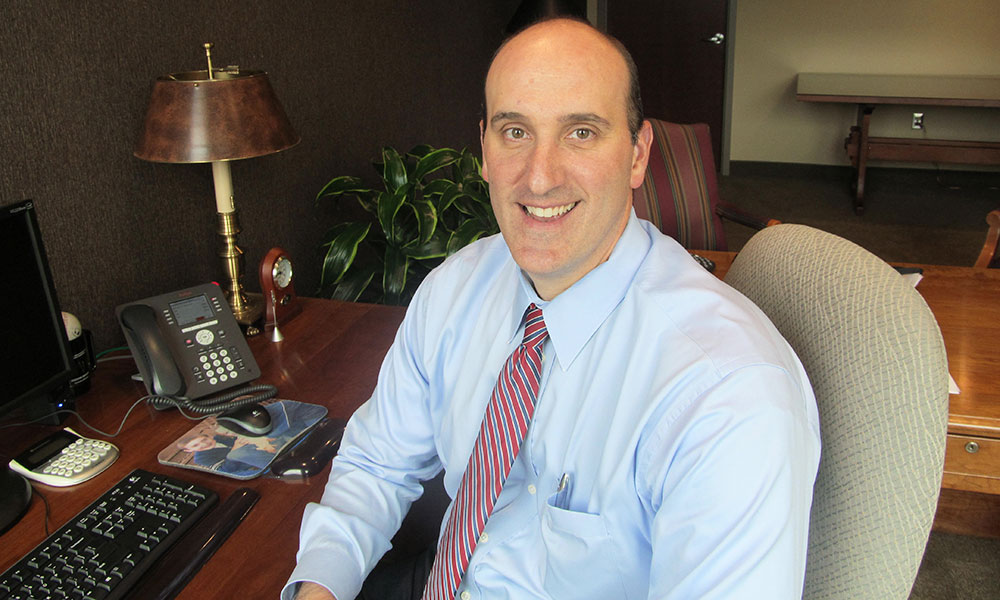 James Reed started working at Excellus BlueCross Blue Shield in 1996. Most recently, he served as executive vice-president of marketing and sales, and as regional president in the Central New York market.

Skaneateles resident just named Excellus’s new president and CEO-elect. He talks about his career, his work-life balance philosophy and why he adopted a mostly plant-based diet

True leaders often step up to the plate during times of crisis.

Reed, who joined Excellus in 1996, succeeds Christopher Booth, who will retire on May 1, 2021. Reed most recently served as executive vice president of marketing and sales.

“Health care is such an important part of our community, and so my previous experience in working closely with many different stakeholders has provided me with a much deeper understanding of the challenges that we all face,” Reed said. “It really provides me with a great foundation for going into this new role.”

Reed has been working with Booth for the past 10 years.

“This is really a great opportunity for the next 10 months or so to really continue to work collaboratively on transitioning during that time period,” he added.

The staff at Excellus has been working remotely from home since March 17 due to the coronavirus pandemic.

“Fortunately prior to the pandemic, we had a really robust business continuity plan,” Reed said. “While I don’t think anyone could have predicted what has happened so far this year, we did have a plan in place. Through various simulation exercises that we have done, it really put us in a good position to respond.”

The company also sought to protect its finances.

“There has been so much uncertainty that has been introduced because of the pandemic in terms of costs, the economy and customers’ ability to pay their premiums,” he said. “We need to make sure that with the uncertainty, we have the financial wherewithal to continue to serve our mission.”

Another priority for Excellus was to protect the jobs of its employees.

“We took necessary steps at the very start of the pandemic to make sure we were doing our part in tightening our belts,” said Reed, noting this included a hiring and promotion freeze, as well as holding on merit raises this year.

“We made sure we were as conservative as we could be knowing that our overall objective is servicing our customers, making sure we continue to service our mission and protecting the jobs of our employees,” he said.

Excellus BCBS is a nonprofit, mission-based organization that strives to help people in the community enjoy healthier and more secure lives through access to high-quality and affordable health care.

“The decisions that we make align to the mission of the company, and that’s the key to our long-term success,” Reed said.

Excellus has responded to the pandemic by taking measures such as increasing reimbursement rates for telehealth; waiving out-of-pocket costs for telehealth; expediting payments of hospital claims, and implementing a 20% increase in reimbursement for COVID-19 admissions, all to reduce the administrative burden to the provider community; and providing employer group support to make sure people understand that if they are out of a job, they need to enroll in COBRA or need to understand what options are available in the individual marketplace, whether that is Medicaid or a qualified health plan.

The coronavirus outbreak is expected to cost the U.S. health system a lot of money, which analysts suggest might mean dramatic increases in insurance premiums next year.

Reed shared his thoughts in regards to what Excellus BlueCross BlueShield customers can expect in terms of premium increases in the future.

“Periodic rate adjustments are necessary to enable our health plan, or any insurer, to produce sufficient revenue and reserves to ensure that the health care needs of our members are met, for both current health care needs and potential catastrophic cost situations,” he said.

Although requested rate increases are typically due to annual increases in the cost and utilization of medical care, Excellus’ rate requests to the state Department of Financial Services for next year remained among the lowest in Upstate New York, Reed noted.

This occurred despite including a 0.5% increase for anticipated increased expenses from the unprecedented COVID-19 pandemic, he added.

As for 2021, Excellus has submitted its request to the Department of Financial Services and is among the lowest rate adjustments filed for small group and individual products in New York state, he noted.

“We want to be as competitive as possible on our prices,” he said.

For four years in a row, Excellus’ premium requests have been below the state average for what competitors were asking, Reed said.

He said the most important variables that will affect 2021 insurance premiums involve the number of members and number of claims.

The MLR is the percent of premium dollars an insurer spends on medical services and quality improvements.

Striving to be the best

Reed said his philosophy for the past 25 years at Excellus has been fairly simple.

“I really focused on doing the best job I could in the role that I was in, making sure I would seek to understand the big picture and understand the industry I was working in,” he said.

Reed said his philosophy also involves knowing what his role is and where that role fits into the overall success of the company.

From a philosophical perspective, Reed said he is a believer in focusing on the organization’s goals and not individual success.

For Reed, that involves the desire and willingness to work on himself.

“I think personal development is a lifelong journey, and if you are self-reflective and willing to improve yourself, then I think you’ll be well positioned to continue to grow inside the organization,” he said.

Reed said 25 years ago when he started with Excellus, he didn’t quite envision becoming CEO someday.

“But I think with each different step along the journey of my career, I made sure I was true to those core values and that leadership philosophy,” he said.

With every new opportunity that came along, Reed began to see that as he continued to work, grow and be a beneficial member to the organization, good things continued to happen.

Reed sees the personal development piece as probably the most important.

He said nobody is perfect as a leader or simply as a human being.

“If you understand that and are willing to self-reflect, learn and continue to grow, then I think that is the key for anybody to be a good leader,” he added.

In terms of reaching a healthy work-life balance, Reed said it is important for any leader to recognize the need to attain this goal.

“It is maybe more important to actually model the behaviors that lead to better balance,” he said. “It’s one thing to say, ‘we want to make sure our employees have balance’, but if you don’t model the behavior yourself, then what unintentional signals are you sending to folks who you work with or who work for you?”

That behavior includes making sure to eat a healthy diet, getting enough sleep, exercising, and spending time with family and friends, Reed said.

“This has resulted in me being able to be involved with my kids through coaching youth sports,” said Reed, noting he coached each one of his three children through the seventh- and eighth-grade levels in different sports that they engaged in.

“To me, it means playing golf with friends, making sure I am home for dinner as much as possible and cooking dinner with my wife and spending good quality time there, regularly taking walks and taking my dog out for walks,” he said.

“It is really the behavior that you would probably think most people should be doing,” he said.

At times over the years when Reed feels stressed out about what is happening at work, he takes the time to self reflect.

At that point, “I can see that I have not been focusing on any one of those things, whether that is sleep, eating health, spending time with family or exercising,” he said.

“To me, a good healthy balance includes a little bit of all those things,” he said.

About a year and a half ago, Reed took on a challenge generated by Excellus employees to convert to a mostly plant-based lifestyle.

“For the past 18 to 19 months, I have pretty closely stuck to that lifestyle. I’ve seen tremendous benefits from it in terms of energy level and evidenced by my different biometric screening results and numbers overall,” Reed said. “In general, through eating mostly a plant-based diet, I have tremendously benefited from it.”

“It’s challenging and does take discipline, but it’s not has hard as I thought it would be or as people might think it is,” he said.

The availability of resources as well as access to folks who are on a similar journey is helpful, he said.