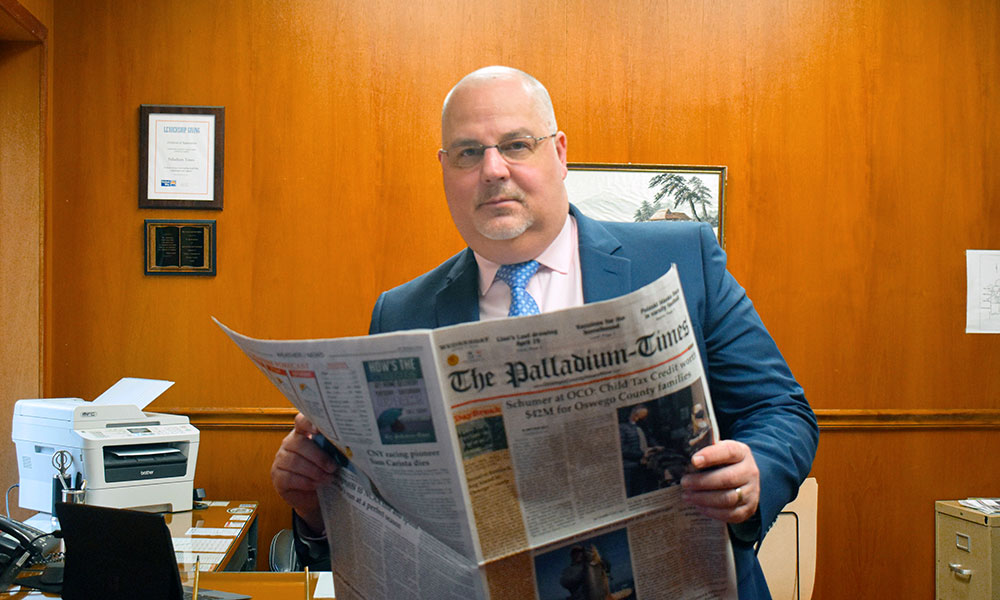 New publisher of The Palladium-Times and The Valley News plans to beef up advertising sales, bring on new reporters

Jeff Weigand has spent several decades in sales and advertising, but he’s always had his sights set on achieving one career goal.

“When I got into this business I wanted to be a publisher,” he says. “It took me a while to get there and I’ve had some ups and downs and some hurdles, but I’ve been able to overcome that and here I am.”

Now Weigand is putting his experience in the newspaper business to use in Oswego County.

He became publisher of The Palladium-Times and The Valley News in March, replacing longtime publisher Jon Spaulding. Both papers and their shared website, OswegoCountyNewsNow.com, are owned by Pennsylvania-based Sample News Group, which publishes more than 70 newspapers in six states.

Although Weigand was born and raised on Long Island, his father, who worked in advertising, moved the family to Los Angeles in the 1980s for his job. So most of Weigand’s career was spent in the western United States.

After leaving a job selling cable advertising in the early 2000s, he moved to Arizona to be closer to his parents, who had retired there. He took a job training and coaching newspaper sales executives who needed to learn how to sell against cable advertising. Weigand’s experience made him a natural fit and he enjoyed the constant travel that came with the job.

For several years his life mirrored that of George Clooney’s character in “Up in the Air.” He was on the road for work up to 49 weeks a year and kept a sparsely furnished apartment in Scottsdale that he returned to on weekends.

But after a few years Weigand hit a wall at the job, made worse by his father’s death. He left and was hired to be advertising director for a family-owned newspaper in northern California. He loved supervising the staff and enjoyed the atmosphere of a family-owned business.

In 2006, however, he decided he should be closer to his mother and took a sales manager position back in Arizona. That job turned out to be a mistake, Weigand says, and he eventually found a new job as a sales executive at The Arizona Republic. He met his future wife there and enjoyed the work. But during his six years at The Republic he hadn’t been able to work his way back into management. So, he kept looking for jobs that would give him a chance at running a newspaper someday.

In January 2014, Weigand flew to Central New York for an interview at The Auburn Citizen. He was living in Arizona at the time and didn’t own a winter coat. To his shock, he opened the blinds in his hotel room the next day to discover four inches of fresh snow. Despite the rough introduction to New York winters, he signed on as advertising director. He and his wife, Rhea, made a point to become involved in the community.

“We became immersed in Auburn,” he says. “We loved Auburn.”

He joined the boards of the Auburn Downtown Business Improvement District, Cayuga Museum of Art and History and Unity House as well as volunteering with the United Way.

In 2017, he was promoted to general manager, responsible for overseeing everything from sales and production, to distribution and finance. Only editorial remained in the hands of the executive editor. Weigand says he enjoyed how close-knit the staff was.

“We were like family over there and that’s what I liked about it,” he says. “Everybody knew everybody.”

Then in 2019, Lee Enterprises, which owns The Citizen, cut positions and Weigand lost his job.

He was hired by The Rome Sentinel as revenue director. He says he liked working for the family-owned newspaper. When the pandemic hit last year the paper, like its peers, struggled. Weigand was proud of the resilience of the staff. They made use of the Paycheck Protection Program, but also developed several special newspaper sections and a shop local program to bring in extra revenue. But in January, with the pandemic continuing, Weigand was laid off.

As he looked for a new job, Weigand was determined to remain in management. He says nothing was off the table; he considered positions as far away as Tennessee and Vermont. Neither he or his wife have any family ties to Upstate New York, but they had grown accustomed to the area.

So, when he learned about the opportunity in Oswego, it seemed like a good fit. He knew the area well and preferred to work for a family-owned business, such as Sample News Group.

His first week on the job was admittedly a chaotic one. Weigand started his new job one day and the next day he and his wife had movers coming to truck their things from Rome to Oswego.

What changes does Weigand have in mind? Nothing major, at least at first, he says. The Palladium-Times, for example, will continue to be published Tuesday to Saturday for the foreseeable future, he says. Right now, he’s mostly focused on watching and learning how the organization operates.

That’s not to say Weigand doesn’t have ideas about how to improve the newspapers long-term. He points to a seven-page action plan he developed.

With a smirk, as if acknowledging it’s a bit overkill, he says the document has grown to 14 pages with additions and notes from his boss.

Many of the long-term changes Weigand is considering reflect his background in sales and advertising. For example, he is launching an advertising matching grant program for businesses that have been hit hard by the pandemic. If a business invests a certain dollar amount, the newspaper will match it.

“I want to do that to help locally owned and operated businesses in the community,” he says.

Weigand also wants to beef up his advertising team, which currently consists of only two people.

“I do want to bring on more sales people,” he says. “Without advertising we don’t have a paper.”

It’s not just a matter of returning to business as usual. The pandemic has changed the nature of sales, Weigand says. After more than a year of mostly avoiding in-person meetings business owners want to see their sales representatives, but they don’t want to be sold. Often, they want someone to vent to and are looking for help rebuilding their business.

“You’ve got to get out and see your people, you’ve got to come in with an idea or a solution,” he says. “If you’re not doing it, someone else is.”

In addition to hiring more sales staff, Weigand says he plans to spend some of his spare time going on sales calls, partially as a way to get to know the community and introduce himself.

With increased advertising revenue Weigand would like to bring more reporters into the newsroom. Aside from adding reporters, he says he wants to keep out of editorial and leave most decisions to the newsroom’s editors.

Changes aside, Weigand says he has a solid foundation to build on. The newspaper has its own printing press on site. Although more than 40 years old, having a press is an asset and gives the newspaper a great deal of flexibility, he says.

There’s also the staff. Although Weigand says he’s usually the first one in and the last to leave the office, his staff works extremely hard to put out a quality product. A small, close-knit staff is a significant asset, he says, especially when the company is family-owned.

“There’s something different about working for the family-owned newspapers,” he says. “We’re not managed by a hedge fund that has shareholders; here everyone matters.”

Hobbies: Fan of Formula One racing, interested in history.