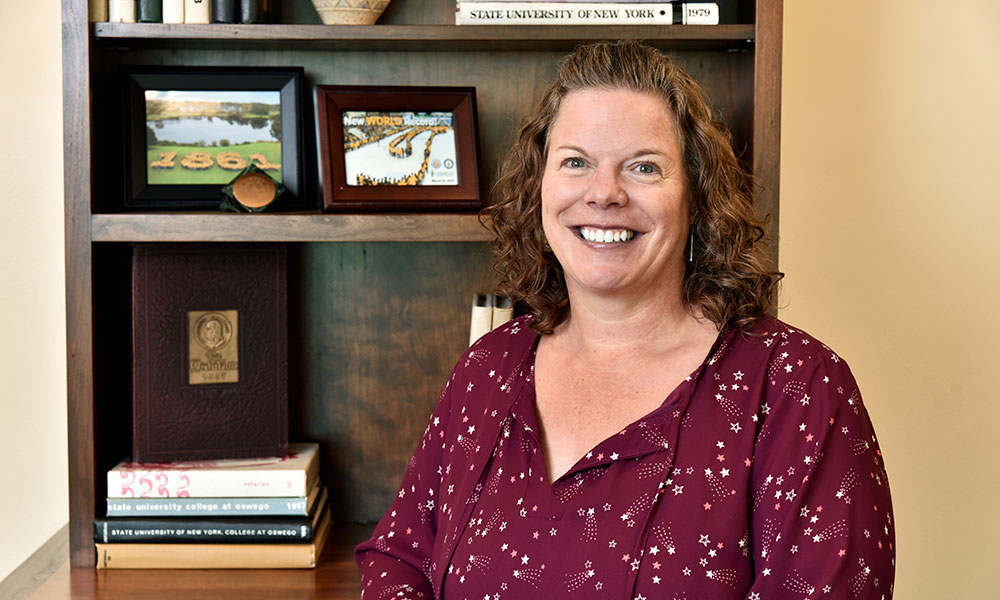 For Kathleen Kerr working in higher education has become something akin to joining the family business, though she didn’t plan it that way.

Her career in higher education has spanned three decades; one of her daughters has a master’s degree in college student administration. And her father recently retired as vice president of student affairs at a college.

“You could say that I was following in his footsteps,” Kerr said. “The reality is that I went to college knowing that my dad worked at a college, but not really understanding what he did.”

That changed when Kerr — who joined SUNY Oswego in August as the college’s new vice president for student affairs — was in her junior year at Indiana University in Bloomington. She was trying to decide whether to pursue a Ph.D. in psychology, but was serving as a resident assistant (RA) and deeply enjoyed the job.

“So, I called my dad up and I said ‘How do I keep doing this RA thing and working in higher education?’” she said.

Up until that point Kerr had assumed she had to choose between a doctorate and working with students. But her father explained that there was a profession called student affairs and that it was possible to get a master’s and a Ph.D. and work on a campus supporting students.

“It wasn’t until he and I had that conversation when I was a college student that I really understood what he did as a profession and that led me to get a master’s degree and eventually a doctorate,” she said.

Over the past four years, she served as associate vice president for student life at Delaware. That position gave her responsibility for an array of seven areas within student affairs.

Kerr enjoyed her time at Delaware, but she began considering the idea of a new job. Her four daughters were finally grown and out of the house. Then her husband, a school teacher, decided to retire, in part because of the pandemic. That freed them up to relocate.

Kerr saw the job posting at Oswego and thought it was a great opportunity. She noted that Oswego was a bit smaller than Delaware.

“But I like that because I want to be able to maintain the amount of contact with students that I think this size school affords to a vice president,” she said.

Kerr is keenly aware of the “big learning curve” she faces in taking on a new responsibility at a college in the midst of the pandemic. There are the challenges of learning a new job as well as the immediate difficulties brought on by COVID-19. Students returned to campus in August to begin in-person instruction. The college announced that all students with a physical presence on campus must be vaccinated by Sept. 27.

Despite the challenges Kerr said students need the support provided by the college now more than ever. Students have had to deal with distance learning and social isolation, for example, things that have reaffirmed Kerr’s view that there is a significant benefit to students being on campus. It can be as simple as being able to walk down the hall and ask a friend for help with a class or popping into a professor’s office hours with a question.

“There is a benefit to learning with others around you,” she said. “COVID taught us that distance learning is not ideal in terms of facilitating engaged learning experiences.”

One way of thinking about student affairs is that it concerns all the things that take place outside the classroom: food, housing, mental health, medical care, sports, social activities, creating a sense of community. Kerr likens it to the things that make college feel like home when students are away from home.

“I think of student affairs really as supporting students toward success, helping them with any bumps in the road,” she said.

In some ways student affairs has undergone a dramatic shift over the last several decades. In the past, for example, gripes about the spartan accommodations on college campuses and stomach-churning food served in the dining halls were comedic fodder for students. Today colleges and universities make it a point to highlight their modern residence halls, generous meal plans and seemingly endless list of extracurricular activities.

One of the reasons for the shift, Kerr said, is that research shows the closer students are to support resources (faculty, tutoring, other students, etc.) the more likely they are to persist toward graduation. So, it’s in everyone’s interest to boost the amenities to encourage students to remain on campus as long as possible.

The other reason is that competition among colleges and universities to attract students has soared over the last 30 years.

“When I first started in residence life and housing people weren’t putting a lot of attention into what did a residence hall room look like and how did the food taste because there wasn’t a lot of competition,” Kerr said. “Nowadays students have choices.”

Kerr believes there’s a balance to be struck between enhancing amenities such as food and the living experience and education.

“I don’t think it’s necessary for us to spend a lot of money on amenities that aren’t contributing to educational experience.”

That reflects Kerr’s philosophy during her time at Delaware. She said she focused on utilizing the resident experience to support student success and contribute to student learning, but doing so in a very intentional way. That meant guiding staff so everything from check-in and bulletin boards to social programs and conversations with residents was aligned with the overall education goals of the institution.

She also worked to strengthen the university’s “culture of care,” creating a wellbeing center to increase the level of student awareness about the support resources available on campus.

Kerr is interested to see if some of the initiatives she focused on at Delaware can be useful at Oswego. She said that over time she also wants to form a consensus about the exact goals of the Division of Student Affairs and how best to strategically move toward those goals. But initially she said most of her time will be spent listening to students and staff to gain an understanding of the culture and existing programs.

Education: Bachelor’s degree in psychology and a master’s degree in college student personnel administration from Indiana University. Doctorate in educational leadership from the University of Delaware.