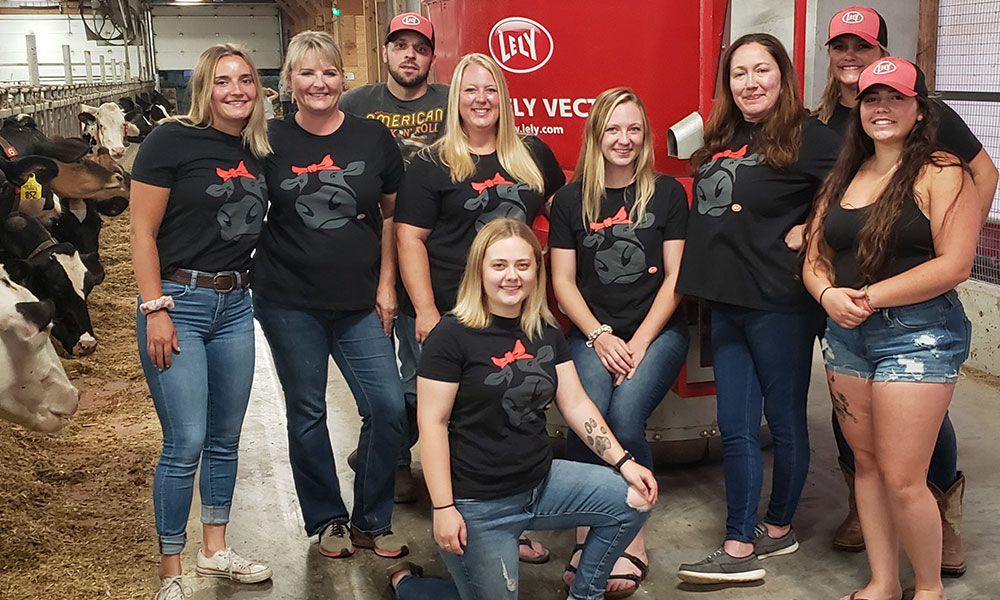 Part of the crew which until recently ran Twin Mill Brook Farms, LLC.

In early July, they decided to sell the herd and equipment.

Their grandfather founded the farm in 1949, but the transition to the current generation was not as straightforward as many business successions.

The sisters’ parents quit dairying in the 1980s as milk prices tanked and expenses rose. Though their parents raised beef cattle on a separate farm, that’s far different from dairying.

In 2018, Booth returned to her grandfather’s farm to help her brother, Edson House, revive the dairy operation, and a year later VanDuzer quit her job in information technology to join them.

The brother moved on to other endeavors but the sisters continued dairying. The women had never milked cows and hired workers who had also no experience in dairying. Without realizing it, all their new hires were women (though they subsequently hired two men to join the operation).

“We were all learning together, which was an amazing year and a half,” VanDuzer said. “We had to figure out things and ask questions and operate equipment that was all new to us.”

VanDuzer expressed gratitude for the many neighbors, vets and friends who offered helpful advice and practical help in getting the dairy operating. Perhaps it was the gender-based camaraderie that fueled their farm’s work culture but their team worked well enough together to restart the farm, including building barns, buying stock and bringing the farm into modern times.

For Twin Mill Brook, changing from a conventional electric milking system to a robotic system meant the farm would have at least a chance to become economically sustainable, dramatically reducing the cost of labor. On paper, it made sense that reducing labor would mean the farm could thrive.

Bringing in two Lely Astronaut milking machines, a Lely Vector feeding robot and Valmetal comboxes enabled the crew of only one full-timer and six part-time people to care for 115 Holstein and Jersey cows.

A Farm Credit loan and grants helped pay for the robotic system. Finger Lakes Dairy Services, Inc., helped with the planning process, which was overseen by Whitney Davis, a dairy equipment project specialist.

The robots can service 60 cows apiece and the sisters found that 111 to 115 was the optimal number, along with 115 dry cows and calves.

Creatures of habit, cows like the predictability of the robotic milking system.

With only a short period of acclimation, cows readily take to the robotic system, which cleans their udders, milks them and records their information.

Cows must be milked at least twice daily; however, with the Lely system, they may be milked whenever they would like during a 24-hour period. The cows can choose when and where they rest, eat and spend their time. The robotic system allows them to live based upon their natural herding instincts rather than a human-imposed schedule.

The demands of dairying can wear on farmers. It is difficult to get away for the day because the cows must be fed and milked and their stalls cleaned morning and evening. That is why the sisters chose the robotic system, which reduced choring to cleaning and filling the commodity boxes for feeding. Reducing the labor hours of dairying allows farmers greater flexibility to perform other revenue-generating work and spend more time with their families. They need to staff the barn only 12 hours a day with a robotic system. Twin Mill also installed security cameras in the maternity pen and the sisters took turns checking the cameras all night. Normally, cows calve without issues all by themselves.

Their self-monitoring milking and feeding robots call about any little thing that hinders their ability to function. In robotic systems, each cow wears a unique tracking device on her collar that helps the system track the cows’ movement, feeding and milking times. The system tracks 130 data points, all accessible to farmers’ computers or mobile devices.

“It even detects if it goes too long between cows,” VanDuzer said. “Sometimes, the cows will get a gate loose. They’ll stand and play with gates and might block themselves from getting to the robot. The robot will call us.”

The sisters also raise 220 acres of corn and lease 175 acres for hay. They buy feed and rely on the input of their niece and herd nutritionist, Jacklyn Booth, who is a senior at Cornell University.

Some farms estimate that going robotic cuts about 45% of their labor force. The workers on these farms still have plenty to do. They must clean the robots three times daily and the barn every day. They also spend a few hours daily to fill the feeding system and manually feed calves. Despite the labor-saving nature of the robotic systems, Booth and VanDuzer could not maintain the minimum staff required to operate the dairy. They decided to sell the herd and robotic equipment in the coming weeks.

“We’re down to myself and two part-time people,” VanDuzer said. “In past four weeks, I lost all the other employees. It’s a real challenge. We made the heart- wrenching decision to sell the cows. We had a good running facility. We had a good run for two years here.”

Aside from the nationwide labor shortage, agriculture has always struggled to find labor.

“It’s hard to attract people to this industry,” VanDuzer said. “In order to really succeed you have to want to live the lifestyle.”

Although not a panacea for the labor issues dairy farmers face, robotic systems can help alleviate the problem.

For this reason, Davis said that robots have become important in the dairy industry.

“I have dairy customers who milk with robots who say, ‘If I didn’t have robots, I wouldn’t be milking cows,’” Davis said. “It’s not hard to do but it’s different from conventional means. It gives them a better way of life and they can be profitable.”

Finger Lakes Dairy Services has about 50 customers with robots. Davis said that many think that the systems are very expensive. However, they save on labor and can help dairy farms get more milk — some as high as 15% more — from the same number of cows. The systems also improve herd health, as the equipment’s consistency and constant herd monitoring help farmers stay better attuned to their animals.

“There are a lot of people who should at least consider looking at robots,” Davis said. “It’s the way for some dairies to survive, exist and be profitable. Dairies with robots say they know much more about their cows with this technology than they ever did milking conventionally. The information obtained detects problems in cows early on, so remedies are faster while impacts are reduced. There are plenty of experienced robot users in New York to visit to see the positive changes they’ve realized.”

VanDuzer said that they do not plan to sell the land, just the robots and cows.

“We are selling the operation out as pieces,” she said. “We aren’t sure yet what it will be. We will still farm crops.”