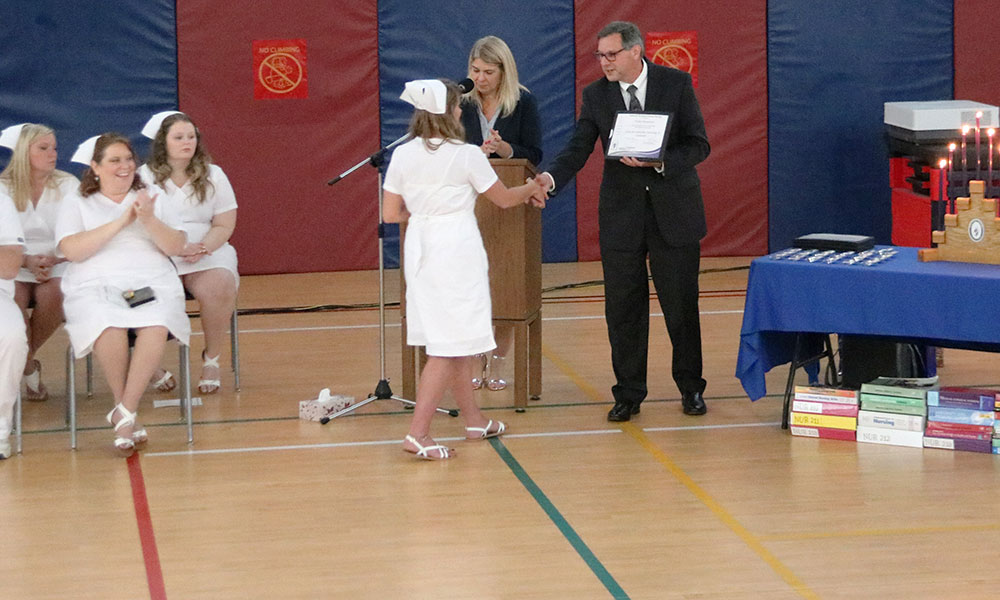 Mark LaFountain, assistant superintendent for personnel at the CiTi BOCES in Mexico, shaking hands with a student at a recent LPN graduation ceremony. Photo provided.

After 39 years in the education system, Mark LaFountain says it’s time to let a younger generation take over

Life has been an on-going education for Mark LaFountain.

Soon, the assistant superintendent for personnel at the Center for Instruction, Technology and Innovation in Mexico will write a new chapter in his life: retirement.

LaFountain’s professional career began as a sixth grade teacher, in 1982, at Sackets Harbor for two years and then, in 1984, he started as a second grade teacher at North Rose-Wolcott, a position he held for 12 years.

He did an administrative internship at BOCES (CiTi) for the summers of 1992 and 1993 as migrant summer school principal.

“Originally, I was hired at BOCES as a special education administrator [supervisor of special education], and then I was promoted to principal for the career and technical education program,” he said. “Then, I received another promotion and moved over to the district office as director of human resources. During the search for our current district superintendent [2011], I was named interim deputy superintendent.”

Once Chris Todd was hired as superintendent, the board changed LaFountain’s title to assistant superintendent for personnel in 2012, he added.

During his tenure at BOCES, he has worked with three superintendents.

“Just to be totally transparent, since I was able to buy back time when I worked as a custodian when I was in high school that is how I get to retire this coming July with 39 years of service credit. That is why I am leaving in December instead of July,” he explained.

LaFountain earned a liberal arts degree at Jefferson Community College and his bachelor’s and master’s degrees from SUNY Oswego. At Oswego, he also earned his CAS certification (certificate of advanced study), which enabled him to secure any leadership job in P-12 schools in New York state.

From the very beginning, he has enjoyed his tenure in education.

“I enjoyed the interaction with students, hoping that I was able to positively alter a student’s vision that would have an impact on their future,” he said. “As an administrator, I hope that I was able to provide them with the necessary guidance and tools to be successful in their job.”

“The hardest part of my present position is having to tell people that they don’t have a job for whatever the reason. I think that regardless of the situation I was always able to do it with dignity. But you never feel good about it,” he added.

Over the course of his career, he has seen many changes in the field of education.

“The biggest change I think is all the standardized testing that has been mandated over the years and requiring a Regents diploma for all students,” he said. “I definitely agree that you need to raise the bar. But we are not ‘one size fits all.’ I know that as a student, I struggled in school and these requirements would have been extremely difficult. I think that actually helped me as a teacher because I could understand the struggles that the students had with academics.”

“I think the biggest change in my tenure at BOCES has been the development of all the various programs to meet student needs, especially in exceptional education. We really want all students to succeed and I think we provide the pathway to success,” he said.

“I truly have enjoyed my career. I found something that I liked to do 39 years ago and have enjoyed every minute of it,” he continued. “If I had to choose my career path all over again, I would not change a thing.”

“I will miss the people. I thoroughly enjoy working with people and I think it is important for your staff to see you take time to learn about them and their families. It is hard to do in a large organization, but not impossible,” he said. “Staff and students need to know that you care about them and they need to see you when things are going well and not just when things go wrong.”

“I would hope people will remember me as someone who would always take time to listen to them and someone who was honest, trustworthy and caring,” he said. “I believe that my words were always good and I could keep my word.”

LaFountain has a quote “that I tend to live by, which I believe was from President Roosevelt, which is: ‘People don’t care how much you know, they only want to know how much you care.’”

When he retires, he said he is looking forward to spending time with his wife, Sharon.

“I met my wife when I was student teaching in Hannibal. We got married in 1983. So this August will be our 38th anniversary,” he said. “We lived in Fulton for the first 20 years, and then built a house in 2003 in East Syracuse, my wife’s hometown,” he said.

His wife retired from the Hannibal school district after 33 years as an elementary teacher.

His parents still live in Watertown and they will be celebrating their 62nd wedding anniversary this June.

LaFountain is active in the community as well. He served on the ES-M school board from 2007-2010 and has been a member of the Nortrip Masonic Lodge since 1993.

In the future, he said it’s possible that he will volunteer for adult literacy and spend “more time with my various hobbies.”

In his free time, he enjoys wood-turning, gardening, wine making, model railroading, golf (“which I hope to do more of”), cooking and traveling.

Between attending school, working as a summer custodian at Case Junior High School in Watertown and his professional career, he has spent 56 of his 61 years in school.

“It has been a magnificent career. But as the oldest and longest standing administrator at BOCES, it is time to move on and let the young folks take over.”