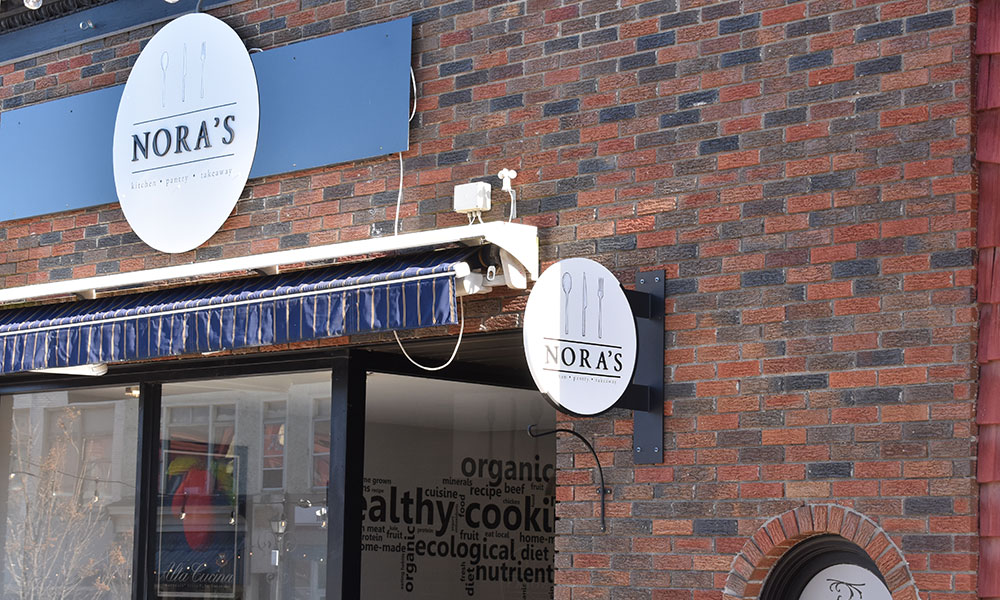 Façade of Nora’s in downtown Oswego.

Nora’s in Oswego is all about simplicity. Its black-and-white logo with a spoon, knife and a fork appears above the restaurant’s name. The walls are bright white and the floors bear a checkerboard pattern. Red outlines the menus on the wall and covers the top of the tables. Even the bifold menu is organized with a distinct font as pristine as the atmosphere of the restaurant with its designated kitchen, pantry and takeaway areas.

Located on the main strip of West First Street in downtown, Nora’s fits in well with the rest of Oswego fare and complements the local restaurant scene.

The clean ingredient focused and environmentally conscious eatery stands out with a couple signs bearing the name and a third that reads “EAT” with a hand pointing toward the door.

The concept of Nora’s is straightforward: Patrons order at the counter and the order is brought out for the patron to pick up and (hopefully) enjoy.

The fare available during Nora’s breakfast and lunch hours is definitely on the healthier side and caters to an array of dietary preferences. Where many healthy-focused restaurants come at a price, several options for breakfast and a late lunch came to an affordable $47.73 (before tip).

My friend and local entrepreneur Michael and I ordered a coffee each and shared a couple orders of toast, a bowl of porridge and a breakfast burrito for our meal. Nora’s toast and the avocado toast ($6.50 each), both served on thick and flawless and toasted-to-perfection multi-grain bread, were great options to bite into when starting the most important meal of the day.

Both toasts orders were definitely photo-worthy enough to cause Instagram users to drool and short circuit their phones. The Nora’s toast was topped with goat cheese, bosc pear, pomegranate seeds, pecans and a drizzle of honey. It had as much flavor as it looked and exceeded expectations. The pomegranate seeds were flavor grenades. The bosc pear slices were crisp and sweet. The cheese and bread definitely helped balance it all.

The avocado toast, a common staple of bougie toast, was as aromatic as it was flavorful. The tomato, onion, pepper and slathered avocado was refreshing. It’s not reinventing the avocado toast option, but it is Nora’s version of it and it’s an applaudable effort.

The nuts and berries porridge bowl ($8) was literal. The steel cut oats were joined by strawberries, blueberries, pecans and maple syrup. The temperature of the oats was just right (bear-able) and we didn’t need two other options to determine it. The aspect the two of us didn’t like was the puddle of water found on the bottom of the bowl. The oats weren’t soggy and it’s difficult to not have some water residue as I do like my oats saturated.

The breakfast burrito ($7) was on the smaller side, but the very well-wrapped egg, onion, avocado and cheddar was hearty. There was also a smear of chipotle cream in the mix, and the amount was just enough. Nothing kills a handheld breakfast wrap like mayo or whatever dressing oozing out. Kudos to Nora’s.

Since this Saturday was a busy day, I ordered a Bill’s Favorite sandwich ($9) and a cup of pumpkin pie chia seed pudding (not labeled, but will guess $3-$4) for later. The French baguette sammy was stuffed with shaved ribeye, manchego cheese, and arugula. There was a great balance between bread and ingredients as well as flavor. The standout component was the horseradish sauce. The horseradish was noticeable with every bite; however, it wasn’t overpowering. It was a hearty sandwich which could be eaten over the course of two lunches (but I shared it with my fiancé).

The pumpkin pie chia seed pudding was a spontaneous buy in order to satisfy a sweet treat void. The amount of pumpkin was perfect. It was creamy and smooth. And it wasn’t overly sweet. It was that guilt-free treat I wished would never end.

Nora’s is just months old and it’s already popular. There’s nothing really like it in the heart of the city. For a quick bite, a grab-and-go meal, or a sit-down experience with friends and family — it’s a sure bet.