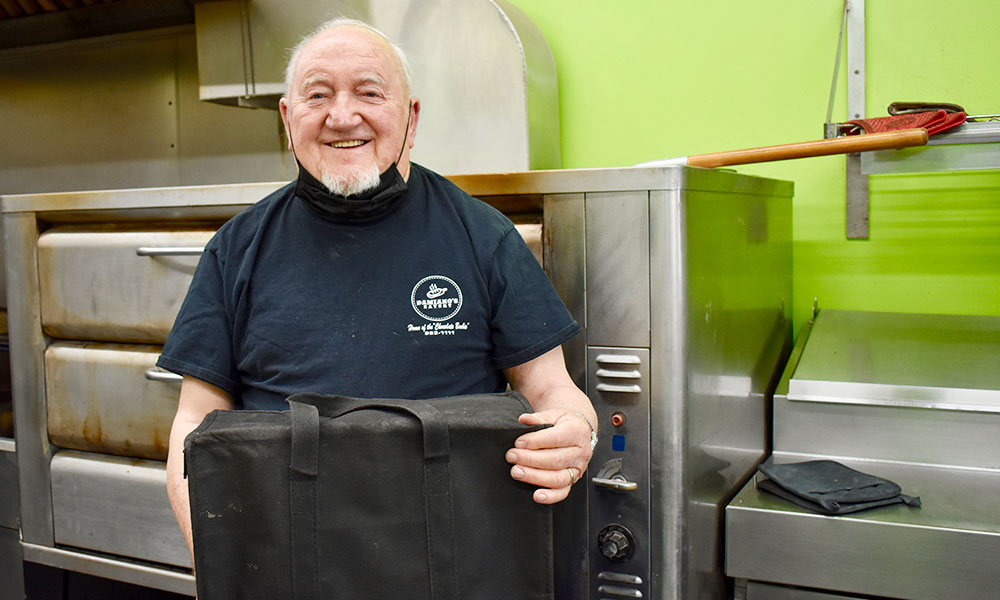 Norman Dann of Palermo is ready for his shift at Damiano’s Eatery in Mexico. The 80-year-old stepped back into the workforce after his stepdaughter had problems finding drivers to deliver pizza.

Facing shortage of drivers, Mexico pizzeria owner reaches out to her 80-year-old stepdad, who gladly accepted the job

After 34 years on the line at the Nestle chocolate works in Fulton, followed by a decade as a home health aide, Norman Dann had no plans to start a new career.

He soon discovered, however, that he disliked the idleness of retirement.

So, earlier this year when his stepdaughter, who owns a pizzeria and was short on delivery drivers, asked Dann for help, the 80-year-old waded back into the workforce, this time toting an insulated food bag.

“When you hear businesses talk about not being able to find help, that is so true for us,” says Denise Damiano, owner of Damiano’s Eatery in Mexico.

Employers nationwide are struggling to hire workers, especially in manufacturing, construction and restaurants. Job openings surged this spring, but unemployment has remained higher than before the pandemic. Experts say a variety of factors are responsible, including fear of getting the coronavirus, child care issues and continuing unemployment benefits.

Damiano struggled to hire enough delivery drivers even before the pandemic.

She says her drivers average $23-28 an hour with tips and closer to $30 on weekends. Her hole-in the-wall shop competes with two other pizzerias up the street, and in a town of 5,000 people, applicants can be hard to come by. Once the pandemic set in last spring the manpower shortage became critical. With restaurants shuttered, delivery orders skyrocketed.

“And I just could not find any help,” Damiano says.

She was limping along with three drivers when the situation worsened. One driver, a student home from college, had to quit when the university reopened for in-person classes. Another driver was exposed to a friend who tested positive for the coronavirus. That meant he was gone for two weeks due to quarantine requirements.

Damiano searched in vain for more delivery drivers, posting signs in her shop and quizzing friends if they knew of anyone looking for part-time work. By January she was putting in 14-hour days, manning the counter during the day and trading her flour-covered apron for a delivery bag in the evenings.

“I don’t know what made me ask Norm,” she says. “I only asked him to help one week when we were in dire need.”

Damiano had asked her stepfather to work in the pizza shop years before, but he’d still been working as a home health aide and begged off. Dann hadn’t delivered pizzas before and was initially a bit hesitant, but agreed to help.

It wasn’t just a matter of helping his step-daughter out in a pinch. After decades of working, retirement had left Dann with a lot of free time. He enjoys fishing and goes whenever he has the chance, but still found himself with too much time on his hands.

“He’s not one to sit still anyway and he kind of drives my mom nuts,” Damiano says, laughing.

When Dann filled in that first week he enjoyed the work and the money he made, so he decided to stay on. He typically works three weekdays a week from 11 a.m. to 3 p.m., although he’ll work extra hours if someone is needed to fill in.

On a typical day Dann might make a dozen deliveries. At first, he made his deliveries without a smart phone for directions. They upgraded Dann’s phone so he could use it to navigate, but he returned from one delivery and said his phone had taken him the long route to his destination. After that, Damiano says, he decided he didn’t need the technology.

“He’s delivering old school with no GPS,” she says. “He would rather figure out where it is.”

That’s not as difficult as it might sound. Many of the deliveries are group lunch orders for nearby schools, banks or offices that are frequent customers. The pizza shop has a delivery range between five and seven miles and Dann, who has lived in the neighboring town of Palermo for 20 years, knows most of the addresses he delivers to.

“Ninty-nine percent of the time I remember where they live,” Dann says.

On the rare occasion there’s an address Dann hasn’t delivered to before and it’s out of the way, a worker will jot down directions for him as a backup.

Dann says he has no problem keeping up with the pace of deliveries. When it’s busy, Dann will often return from a delivery and have another order waiting. When it’s slower, he sometimes pitches in washing dishes or doing other tasks.

Damiano says she cares for her stepfather, but never worried about his making deliveries. In fact, she was more concerned when he helped unload 50-pound bags of flour and 40-pound bags of chicken wings, and when she arrived at work on a wintery day to find him shoveling snow out front. That’s not to say making deliveries is easy. Dann says earlier this year he occasionally had to wade through snow up to his knees because people hadn’t cleared their driveways or walks.

Most of the time, however, he delivers an order to a customer without a hitch and leaves with a decent tip.

“The people I deliver to, 95% of our customers are wonderful,” he says. “And the customers love me because I’m courteous with them.”

He turned 80 in March and renewed his driver’s license for another eight years. He uses a hearing aid and is diabetic, but says he controls his blood sugar with medication and diet. He doesn’t drink or smoke either.

Damiano is still trying to hire more delivery drivers. She says she’d keep her stepfather on a couple days a week even if she eventually hires more drivers. That doesn’t seem likely to happen anytime soon.

It was still morning on a recent weekday, but lunch orders were already trickling in. A worker loaded food into a delivery bag and slid it across the counter to Dann, who scooped up the bag and zipped out the door. A sign seeking delivery drivers was still tacked up near the register.

Use of Telemedicine for Behavioral Health Increasing