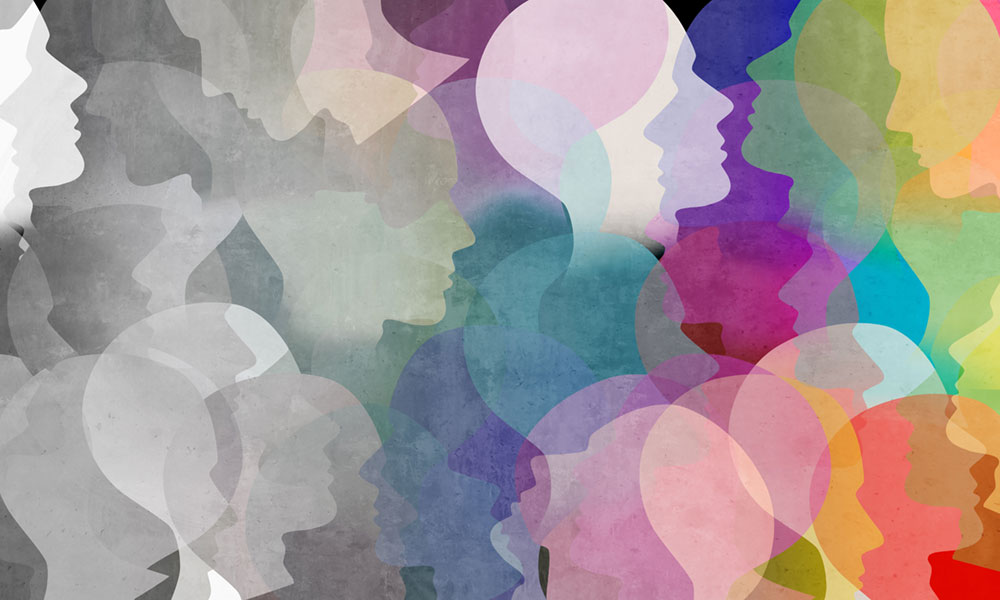 All four counties that make up the Central New York/Syracuse metropolitan area have lost population since 2010, according to Census figures. Cayuga and Oswego hardest hit 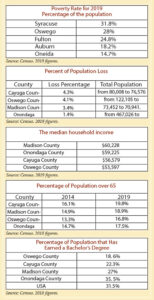 The 2020 Census likely won’t paint a pretty picture of Central New York. The latest data available indicates that the region is getting smaller and older, and the poverty rate is somewhat stagnant compared to improvements at the national level.

According to the Census American Community Survey, which includes data up until 2019, all four counties that make up the Central New York/Syracuse metropolitan area have lost people since 2010.

The total population of the United States increased by 6.3% during that nine-year period, but New York state lost 76,790 people in one year alone, between 2018 and 2019, according to Census figures.

“What you see in Central New York is all part of the greater trend for Upstate New York,” said David R. Turner, Oswego County director of Community Development, Tourism and Planning. He added that CNY’s long winters and high taxes, coupled with better job opportunities in other places, make other states more attractive.

The poverty rate in each of the four Central New York counties last year was higher than the national rate of 10.5%. In Oswego County, 16.1% of the population was in poverty, followed by Onondaga County at 13.7%, Cayuga County at 13.7%, and Madison County at 10.8%.

Even the wealthiest communities in the region lost people just like the cities, the villages and most of the suburbs. Most notably, Manlius lost 2.2% of its population, followed by Cazenovia with a 1.3% loss, and Skaneateles with a 0.5% drop.

A few towns did see population increases since 2010. In Onondaga County, that includes the ever-growing town of Clay, up 813 people to a total population of 59,250; two other towns west of Clay that are still experiencing suburban sprawl in the northern part of their county — Lysander, with 1,074 more people, and Van Buren, at plus 168. The only other town in Onondaga County that increased in population is in the rural southeast corner of the county: Pompey, up 177 people for a total of 7,276,

Turner, the director of Oswego County’s Community Development, Tourism and Planning Department, said he believes a significant chunk of that population growth took place in Amish communities, with families there growing or Amish families from other areas moving to this region.

“The land is plentiful and inexpensive,” Turner said.

Although the decline appears to be slowing down compared to what prior Census’ showed, it has been continual for decades now. Manufacturing jobs went to warmer or more business-friendly states, or overseas, and the tax base eroded. Retail and service industry jobs that replaced factory work have not paid enough to provide the same standard of living. But on the contrary, Upstate New York can still be marketed as a place where homes and property are affordable, where public schools still have a reputation that rivals that of most other states, and where the change of seasons and natural resources can make this place attractive to visitors and potential new residents.

Zillow, a popular national real estate web site, recently listed Syracuse as No. 9 on a list of the most up and coming midsized cities for increasing real estate values.

The argument can also be made that, with an abundance of college and universities in Upstate New York, this region has a skilled and educated work force readily available. The Census figures, however, suggest that folks are not sticking around here after they get their degrees: Only Onondaga County is above the 30% mark for percentage of population that has earned a bachelor’s degree or higher (35. 5%). Cayuga was 22.3%, Madison 27%, and Oswego 18. 6%. By contrast, 31.5% of the people in the United States have at least a bachelor’s degree.

The most recent Census data was pre-COVID 19 and does not even figure in job losses and other hardships in the aftermath of the pandemic.

Still, public officials like Turner are cautious not to put much weight on Census figures as a gauge of a community’s vibrancy. He noted that the counts have a significant margin of error and can be taken out of context when looking at communities that never had large populations to begin with. Negative trends have not discouraged his department from fostering growth and responsible development in Oswego County.

Turner’s department is working with the Central New York Regional Planning and Development Board to identify the areas where access to broadband internet is the most deficient. Improvements in that area, coupled with phased-in replacements or traditional infrastructure such as roads, bridges, water and sewer lines, would boost local business development and create jobs.

“We have been more proactive,” he said. “Perhaps if we can make those improvements, we will see an eventual decrease in poverty. But it won’t happen overnight.”

In addition, Oswego County officials have taken note of a very strong housing market lately. Homes have been selling quickly, and often above the asking price. This trend has been reported throughout the region, though it may not be reflected in the 2020 Census numbers that will be released next year.

“Home sales are definitely a bright spot right now,” Turner said. “For some reasons, it’s a seller’s market, and it’s not because of big reductions in price. What’s driving it, I don’t know. We’ll see how long it lasts.”

Zillow, a popular national real estate web site, recently listed Syracuse as No. 9 on a list of the most up and coming midsized cities for increasing real estate values.