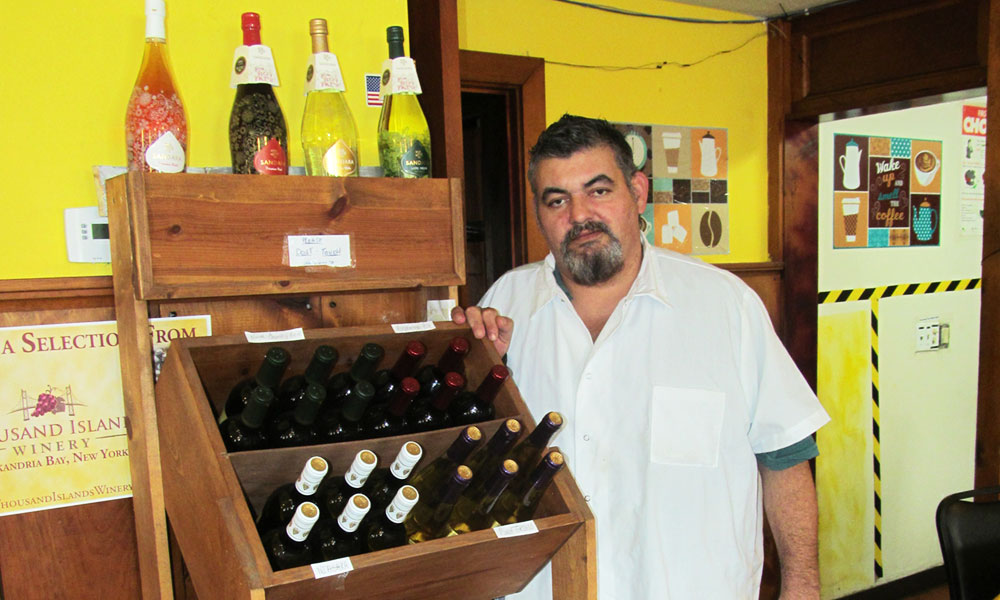 Lenny Costa next to a wine rack in his Casa Brazil Restaurant & Hotel in Pulaski. “The majority of people who visit us are now regular returning customers who appreciate freshly made-to-order flavorful food,” he says

For Lenny Costa, owner of Casa Brazil Restaurant & Hotel, 3866 state Route 13, Pulaski, dining not only nourishes the body; it nourishes the soul.

Costa took the chance of establishing a Brazilian steakhouse in the northern outskirts of Oswego County, and the bet looks like a good one.

His restaurant, formerly the Salmon River Pub and Grill, is quickly becoming a destination point for many looking for a unique dining experience.

Costa, a New York City native of Brazilian descent, decided to open the restaurant to be closer to family.

He took over after deciding the concept of starting a Brazilian steakhouse in Pulaski was a worthwhile endeavor.

Costa characterizes himself as a “big food guy.”

“With my passion for food, I wanted to bring something different to the area. While we specialize in Brazilian food, we also offer classic American-Italian cuisine.”

His passion stems from training alongside some of the world’s highly acclaimed chefs.

Costa launched the business in July of 2019.

“The majority of people who visit us are now regular returning customers who appreciate freshly made-to-order flavorful food,” Costa said.

The restaurant is open for lunch and dinner seven days a week.

This is not Costa’s first business venture. He owned and operated five restaurants in Kentucky, and sold them to a chef who was working for him.

He has worked for the Hilton New York and The Plaza in New York City, and owns a restaurant in the Big Apple, his hometown.

“I’ve always spent my life in the kitchen,” said Costa, who has been involved in the restaurant business for more than 25 years.

Costa said he does miss New York City, which is where all his lifelong friends are as well as family.

“My history is there,” he said. “It was hard to leave everything behind, but I keep in touch with everyone.”

“Family is the No. 1 thing to everyone in Brazil,” he said.

He said a family dinner in Brazil normally features about 30 to 40 people in the house, which includes close friends, and depending on the family, sometimes it is 100 or more.

“It’s a tight community that stays together,” he said. “Pulaski reminds me of that. It was a win-win situation.”

The main challenges in launching the business involved startup costs and repairs. “We are still trying to improve every day,” Costa said.

In characterizing Brazilian cuisine, Costa said above all, it is fresh.

“I go out and buy food in the morning depending on whatever I need for that day. I cook it, sell it, and if I run out, I run out,” he said.

“It’s cooked to order with a lot of seasoning. It’s more like southern comfort food,” said Costa, noting that Brazilian food has been heavily influenced by European cuisine.

“Whether it’s Italian, Mexican, German or French, everything is combined into Brazilian cuisine. When you eat Brazilian food, you can taste a little bit of all those countries,” he added.

“In the United States, there are the regular Brazilian steakhouses, but the real franchises come from Brazil and are in places such as New York City, Brooklyn and Queens,” he said. “All of those steakhouses are based in Brazil, in the north country where the meat comes from.”

Brazilian chefs are recruited to cook at these restaurants, creating an authentic experience for diners.

“I want to do the same, but I want to offer more variety of food,” he said. “You can go anywhere in the country and get rice, beans, pasta, potatoes and meat, but I want to feature the side of Brazil that is not on the menu,” he said.

For example, he incorporates foods that have been influenced by the African culture, such as okra and black-eyed peas.

A popular and common dish is feijoada, which is a stew of beans with beef and pork. It is commonly prepared in countries such as Portugal and Brazil. It is considered the national dish of Brazil.

Costa said it took a while for customers to get familiar with foods such as yucca, a pricey import that is similar to potatoes. It is one of the No. 1 sellers at the restaurant.

Costa seasons his steaks the same as is done in Brazil. The salt he uses is a coarser version than what Americans are accustomed to.

“When we put the salt on the meat, it becomes tender and juicy, and you don’t need anything else,” he said.

Most of his products — such as cheesy bread flour — come from Brazil and are imported, and often he has to travel to New York City to pick up his products.

For Costa, owning a business extends beyond being his own boss.

“My biggest pleasure is being able to cook a meal, serve it and see someone like it,” he said.

He recalled when a Brazilian gentleman who has lived in the U.S. for 36 years walked into the kitchen following his meal and tearfully hugged Costa.

“He said, ‘You just served me amazing food that gave me a little bit of home,’” he said.

He added that he received a similar reception when Brazilian students from SUNY Oswego visited.

“These people understand that type of food, because at one point in their lives, they had a grandmother or mother that cooked like that,” he said.

Costa hails from the southernmost regions of Brazil.

“We do cook in traditional ways, so it’s more rustic and earthy,” he said.

While the menu is a la carte, Costa also accommodates those that want items not listed

“Everything is made to order and not pre-made,” he said.

The business also features a juice bar with selections such as avocado, cacao and papaya.

Costa said keys to success moving forward involve getting folks to try his food while enjoying a friendly staff.

“Everybody loves everybody,” he said.

“Pulaski residents are pretty much set in their ways. Some of them have the guts to try something new, while others don’t,” he said.

The restaurant features vegetarian and gluten-free dishes as well, and Costa makes his own vegetarian hamburgers and steaks.

He said in terms of pleasing customers, it all starts with a clean facility.

He is not afraid to give his restaurant the “white glove” treatment and has cleaning done three times a day.

“When you come to eat at my house, you’re coming for the experience,” he said.

Costa will also send out a free sample for those not familiar with certain entrees.

“Everyone wants VIP treatment, and to me everyone is a VIP,” he said. “I want everyone to feel a part of the Casa Brazil family. If I go somewhere and get treated like a VIP, I always return no matter the distance or cost.”

Meals can be served family style or individually.

Costa said business is “booming” during the summer and fall fishing seasons.

“The word on the river is the food is fantastic,” said Costa, noting he also advertises on local fishing guide sites.

“This is our first winter, and not everyone knows we are here yet. The first year is the most difficult,” he said.

“You have to make sure your name is out there,” he said.

The facility also has eight hotel rooms, with cable television, Wi-Fi, a refrigerator, microwave and two beds in each room.

The lodging facilities are available year round.

Pending Merger Viewed as a Boon for CNY