PWF Enterprises, LLC did the design work and construction in 2013 of a trail across the treetops at The Wild Center in Tupper Lake. The trail has become one of the main attractions at the park.

A Diverse Business Has Helped Phoenix Company to Thrive

According to their business cards, they are the “Wizards of Weird.” It should also say “amazing.”

PWF Enterprises, LLC, was started in March of 2012. It is located at 10 county Route 6B in Phoenix. The principals are cousins, Brenden Backus and Kevin Dates.

Some of their gigantic creations can be seen in Central New York.

“We grew up in the fabrication industry,” Backus said. “Myself and Kevin are both Phoenix natives, graduated from Phoenix.”

Dates’ wife went to college to be a school teacher and got a job in Las Vegas. So they moved to Vegas.

Dates’ father, Brian, is Backus’ uncle. He started Phoenix Welding and Fabrication in the late 1970s.

“We worked there as kids and teenagers, learned how to weld and fabricate and then kind of went on and did our own thing in Vegas and then, fast forward to 2011, we moved back here,” Backus said. “Kevin has three daughters and I have four. So, we didn’t want to raise our kids in Las Vegas. We moved back to Phoenix in 2011. We bought him out and took over Phoenix Welding and Fabrication — started our own company, PWF.” 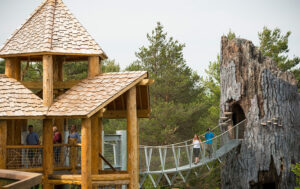 The cousins held executive management positions at a well-known theming company in Las Vegas and fell in love with themed design.

They brought that knowledge and expertise back to Phoenix.

According to their website: “With our experience using a wide variety of different materials and techniques, we can turn anything you dream into a reality. We not only excel at these challenges we thrive on them. We truly are The Wizards of Weird.”

“We currently have 20 employees. We stay right around 20,” Backus said. “We’ve had some more. At one point, when we built the Wild Walk up in Tupper Lake we had 34. We don’t much go below 20. That’s kind of the minimum; and we go up from there. We do everything, so our employees come from all the trades. We have painters and carpenters and welders— everyone.”

“I would say that of the jobs we’ve done at PWF that [Tupper Lake] project has to be one of our favorites,” he continued. “The Vegas stuff was really cool, but we worked for another company in Vegas. As our own company, things that we’ve built, [Wild Walk] is up there, pretty high.”

The Wild Walk in Tupper Lake is an elevated walking path where patrons of the Wild Center can enjoy learning about the habitat and ecosystem from a treetop level. As they move through the structure, they will find a giant spider web, an eagle’s nest and even a massive dead tree. Around every corner visitors will learn and experience what the Adirondacks has to offer.

With the advent of New York state gaming and the local economy growing, PWF has become the leader in themed design in Central New York. They have worked at various casinos and other popular attractions.

Whether they are working on a commercial project or an intricate themed design, their focus is on the details, according to Backus.

“The pandemic slowed us down initially. But we were able to keep things going with projects being deemed essential,” Backus explained. “Things are definitely picking up now. We are seeing more jobs coming out to bid and are currently very busy with work.”

“Most recently, right now, we just got done doing some remodel work at Turning Stone, their new buffet. At Point Place Casino, we did the copper fireplace and back when Yellow Brick Road opened, we did that cyclone of cash that was in the middle there,” Backus said.

“We’re busy 24/7 pretty much, yeah. Right now we are building two entry portals for DC Comics at two different Six Flags locations. Basically, when you walk into the theme park there is a whole new section—DC Universe. We built these big aluminum structures that are all lit up with different DC Comics characters. You walk through this portal into the DC Universe,” he added.

How have they lasted 10 years?

“Diversity. We do all kinds of work,” Backus explained. “There’s the real high-end flashy stuff that we like to do. But the fact that we are diverse keeps us going. Two years ago we built the Litatro and Riverwalk buildings in Oswego. We built and framed those, the central steel, built all the railings, balconies. We were a big part of that construction.”

They do general welding repair work, fences and railings.

“That keeps us busy. Also, in the winter, stone quarry work in places like Jamesville, all over New York. We work at about a dozen different locations doing repair work on their equipment in the wintertime,” he said. “That’s what kept us open—doing, you know, all different types of work because in Central New York you have to do that. If we just relied on the high-end work, it’s not as common as some other types of work in this area—we’d be going hungry.”