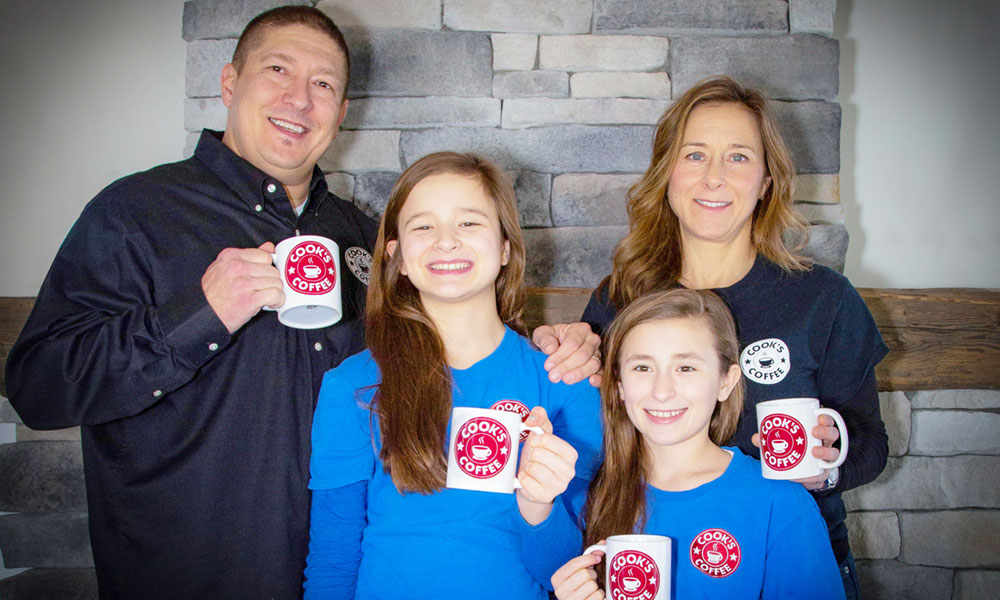 Brian Rossi and his family of Fabius, promoting the coffee he sells in the region.

Entrepreneurship is Brian Rossi’s cup of tea — make that cup of coffee.

Seven years ago, he founded his most recent venture, Cook’s Coffee, named for his late grandmother, Ida Cook. She provided Rossi with inspiration both in her enjoyment of java and the special bond the two shared.

The pandemic has decreased demand from both types of clients.

“Those drinking coffee at the workplace are now drinking it at home,” Rossi said. “There’s an obvious decline in sales. We’re not sure when or if that will ever level out to where it was.

Rossi is not discouraged. He has weathered economic storms before.

A resident of Fabius, Rossi has founded and sold a few businesses, including an office products store and a vending machine business. He currently operates Star Pine Properties in Central New York.

He calls Cook’s Coffee, “not the biggest company I’ve built but probably the most special” because it pays tribute to his grandmother.

“I committed to making a cup of coffee that she liked,” Rossi said. “I wanted to build a coffee that didn’t leave your mouth tasting bitter and sour. I wanted an easy-to-drink, ‘grandma’s cup’ of coffee.”

“She was Sicilian and 5 feet tall. She had a stovetop percolator her entire life. She was always making coffee in it on the stove top.”

When Grandma Cook would drink coffee as late as 8p.m., Rossi asked how she could do it.

Her winsome nature shines through in how her grandson operates his business. Rossi brings samples, has company leaders taste it, and more often than not has a new client on his hands.

“It has nothing to do with price,” he said. “We’ve been successful in adding as many clients as we want. We don’t try to sell anybody anything. When we talk with clients and they want to talk about price, you have to realize things are done better, faster and cheaper and you can pick only two of those. We’re premium coffee.”

At present, he serves 200 locations.

He attributes his coffee’s popularity with his custom blend of beans. He purchases beans from a variety of sources and roasts them in small batches so he can always provide fresh coffee. The inventory in the warehouse turns over about every two weeks. He also provides his customers’ locations with water filtration and commercial grade coffee making equipment.

Learning the equipment was a more daunting process. He had never dealt with maintaining and repairing coffee makers, so he said that in the beginning he had to rely on calling the manufacturer and referencing YouTube videos to figure out how to get the equipment working again.

Initially, he did not realize this.

“Within two years, the equipment was all garbage because the calcium built up,” he said. “It was an expensive lesson. I also learned that it tasted different from the coffee made without filtering it.”

Rossi employs his brother, Mike Rossi, and Rich Gerlock for sales and delivery. His wife Jennifer is chief financial officer. They both like the company “perk” (pun intended) of having unlimited coffee.

Rossi self-funded the company and much of its profits he donates to causes important to him, such as Life Link International, American Heart Association and area churches.

“It’s a labor of love,” Rossi said. “My family wears the branded merchandise. We use the coffee mugs. It’s an homage of the matriarch of our family. It’s a fun company that stands for the life of my grandma and a good cup of coffee.”

Up to this point, Rossi has avoided opening a retail location; however, with the pandemic dragging on he is considering that option.

“When you have a product people like, they’ll find you,” he said. “This whole venture has been a blessing and a healing exercise for the family. It’s provided jobs for people and put a better cup of coffee in people’s cups.”