The company now has 18,000 stores, including 12 in Oswego County, and caters to rural shoppers who don’t have easy access to a store

When construction began on a steel-sided Dollar General store in New Haven, on a piece of property sandwiched between a tavern and the elementary school, near the center of town, Lorraine Lighthall didn’t think she’d shop there often.

New Haven has a mere 2,800 residents and no grocery store, but she didn’t particularly mind — there’s a supermarket and a Walmart less than 10 miles west in the city of Oswego. Five miles to the east, in the village of Mexico, there’s a pharmacy, small grocery store and another Dollar General. But when the new Dollar General opened last year, Lighthall was surprised.

“I’m using it a whole lot more than I ever dreamed I would,” she said. “I run and get things that I need at the last minute. It’s handy.”

Dollar General stores have become ubiquitous in rural America, combining low prices and convenience for rural shoppers who have seen many of their local stores disappear and face the prospect of an annoyingly long drive to get to a Walmart or supermarket.

The rapid expansion of Dollar General has been staggering. At a time when other retailers have shuttered locations, it has opened thousands of stores, mostly away from population centers. The company, which did more than $30 billion in sales last year, now ranks as one of the most profitable retailers in America. In November, Dollar General announced the opening of its 18,000th store. 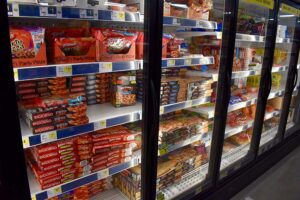 To understand the larger forces that have fueled Dollar General’s rise it’s necessary to look back to the Great Recession, said Ray Wimer, a professor of retail practice at Syracuse University’s Whitman School of Management.

The recession that began in December 2007 after a real estate bubble popped ultimately became the longest and deepest since the Great Depression in the 1930s. Although the recession ended in 2009, the economic recovery over the last decade has been uneven across the country. Some areas, such as Central New York, were slower to bounce back and saw less economic growth.

The uneven recovery merely exacerbated a longer-term problem of growing wealth inequality and the hollowing out of the middle class. According to the Pew Research Center, the share of adults in the U.S. who live in middle-income households slipped from 61% in 1971 to 51% in 2019.

“Unequal distribution of income post-recession was doing something to retail,” Wimer said.

During and after the recession many middle-class people who were struggling traded their normal retailers for lower-priced value-oriented retailers, such as Dollar General and Aldi. Those companies, as well as off-price retailers such as Marshalls, Burlington, TJ Maxx and Five Below have done very well, Wimer said. In many cases consumers didn’t return to their old retailers.

Dollar General in particular has also been very strategic when choosing where to place its stores, pinpointing communities that are struggling economically and underserved by retailers.

“They tend to choose rural locations or small-town locations,” Wimer explained. “They are usually going into areas where the mom-and-pop store is gone, the local grocery store is gone.”

Dollar General owes some of its success to Walmart. In the 1990s, as Walmart moved into more and more communities, many local grocery stores and retailers couldn’t compete and folded. That created gaps, leaving communities without a convenient option to do their shopping.

“And it’s probably a 20- to 30-minute journey for people to get to the Walmart supercenter and a lot of these people that work in these areas, they don’t necessarily have the time or the energy to drive that distance to do their grocery shopping,” Wimer said.

Convenience seems to be a main selling point for residents here. Lighthall still goes grocery shopping at the supermarket or Walmart in Oswego, but she frequently finds herself zipping over to the Dollar General when she runs out of one or two items like when she recently was baking and ran out of sugar.

“In five minutes I can be there and be back home,” she said. “They have most everything in there that you’d want.”

Liz McIntosh lives in Oswego, but teaches chemistry in Mexico. The Dollar General is on her way home and she often stops to grab a handful of items. She said it’s easier getting in and out of the store.

There are also times when she doesn’t want to deal with all the people at a busy Walmart. She said that with the pandemic it’s especially nice to be able to stop into a store that’s not likely to be as crowded.

“It’s just kind of this natural perfect fit,” McIntosh said. “I park, I run in and grab what I want and I’m done.”

Judy LaMay used to go into Oswego to do her grocery shopping, but she was pleasantly surprised when the Dollar General in New Haven opened.

She liked their prices and selection. Now she shops there for everything from milk, cereal and cookies, to dog food, paper products and ice cream.

She’s also able to get some good deals on name-brand items. When the store has a sale on DiGiorno frozen pizzas, for example, they’re so inexpensive that LaMay stocks up on them.

Besides regular shopping trips, LaMay uses the Dollar General when she runs out of something or needs to buy something in a hurry. If she’s in the middle of cooking and realizes she’s out of baking powder or oil, she’ll drive over and pick up what she needs.

“If I happen to find out that I’ve forgotten somebody’s birthday and there’s a party I have to attend, I’ll run up there and pick up a last-minute card, gift and wrapping paper,” she said. “It saves me running into Oswego or Mexico.”

Dollar General increasingly resembles a grocery store with its offerings. Wimer said one area of particular focus for the company has been building out the infrastructure for a cold supply chain. That will allow the company to stock more frozen foods and fresh produce at more of its stores.

Although some investors have raised concerns that Dollar General’s rapid growth is unsustainable, Wimer said the company has done an exceptionally good job of understanding and meeting the needs of its customers.

“They know who their targeted customer is,” he said. “Areas where it wasn’t easy to go get your grocery shopping done, they have fulfilled that need.”

Featured image: Dollar General store on state Route 104 in New Haven. The stores have become ubiquitous in rural America, combining low prices and convenience for rural shoppers who have seen many of their local stores disappear.

How COVID-19 Has Changed the Restaurant Industry