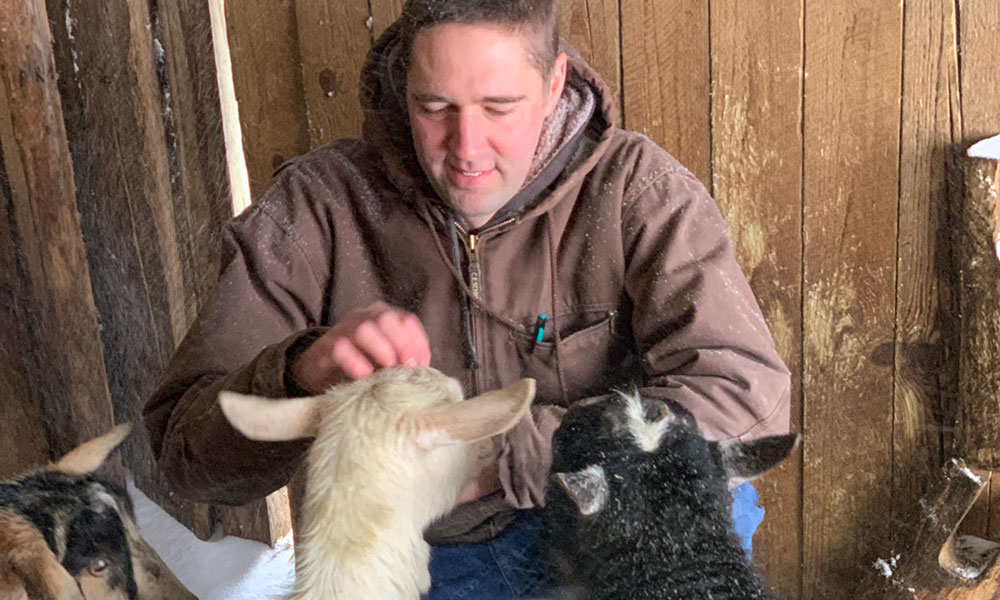 Assistant professor James Weinschreider teaches in the technology department at SUNY Oswego while he maintains a goat farm in Wayne County.

“It’s a great ice breaker,” he said. “In dealing with students, it’s good they can see you can do more than your job as a nice side hustle. I think it empowers them to learn for themselves. It’s a good life skill.”

Residents of Williamson, Wayne County, Weinschreider and his wife, Joanne, started the farm originally in 2009 in Marion when their children were young and daycare became too costly.

James decided he would quit his job as a mechanical engineer to stay home with the children while his wife worked as a nursing instructor at St. John Fisher in Rochester.

To keep him busy, the couple bought a few goats. James learned how to care for goats through tips from local goat farmers and veterinarians and he learned how to make cheese through reading, websites and taking a few cheesemaking classes.

The goat dairy took off. 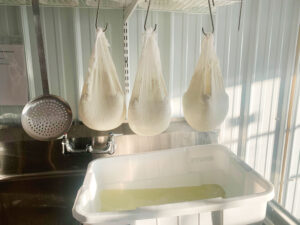 The Weinschreiders decided that building their own creamery would benefit the business. In 2015, they moved it from Marion to Williamson and spent four years building a new creamery on a 15-acre property.

As before, they followed all the protocols required by the New York State Department of Ag & Markets to recertify and in early 2020, they reopened the business as Middle Road Creamery.

Now that the children are a little older, Weinschrieder has returned to work as an assistant professor in the —technology department at SUNY Oswego, where he teaches introduction to materials technologies, and materials precision production.

The seasonal nature of goat dairying works well for his work schedule. The does have kids in the spring and their milk dries off by fall when he is back to teaching. During the winter months, the Weinschreiders use cow milk from a local dairy to continue making cheese.

Their varieties include chevre, feta and tome. The Weinschreiders age some of their cheese in an above-ground cheese cave that they keep at a constant 50-degree temperature.

James’ education in engineering has helped him construct the creamery equipment and the buildings on the farm. Joanne’s healthcare background has helped in caring for the goats’ physical needs. The couple owns 25 Nigerian, alpine and Saanen goats, all raised with non-GMO feeds. When the does deliver their kids — as many as 60 — James must decide which carry the genetics they want to keep and which kids will be sold. 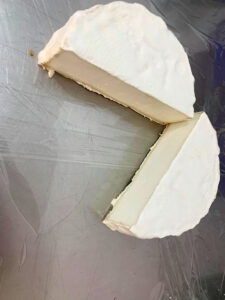 The goats browse on eight acres of pasture, supplemented with hay year-round. Goats are notoriously easy to graze, feeding on forage that many other grazing animals would forgo.

“I once had a patch of poison ivy,” he recalled. “They ate it all down. I milked that evening and found my forearm broke out from the poison ivy.”

James feels pleased with the layout of the farm, which he designed.

“The old farm didn’t have a good setup for selling locally,” he said. “We put this barn close to the road so people could stop by and buy cheese. When we opened up, we had a good turnout.”

Of course, he did not plan for a worldwide pandemic to disrupt food supply chains; however, that caused consumers to seek food from alternative sources, including his farm stand. The self-serve window allows access to a small refrigerator where customers can purchase their cheese and eggs.

He self-financed the farm and designed and built his own pasteurizer. He hopes to begin pasteurizing cow milk in 2021 and perhaps make butter and sell fluid goat milk. Many customers have asked about goat milk.