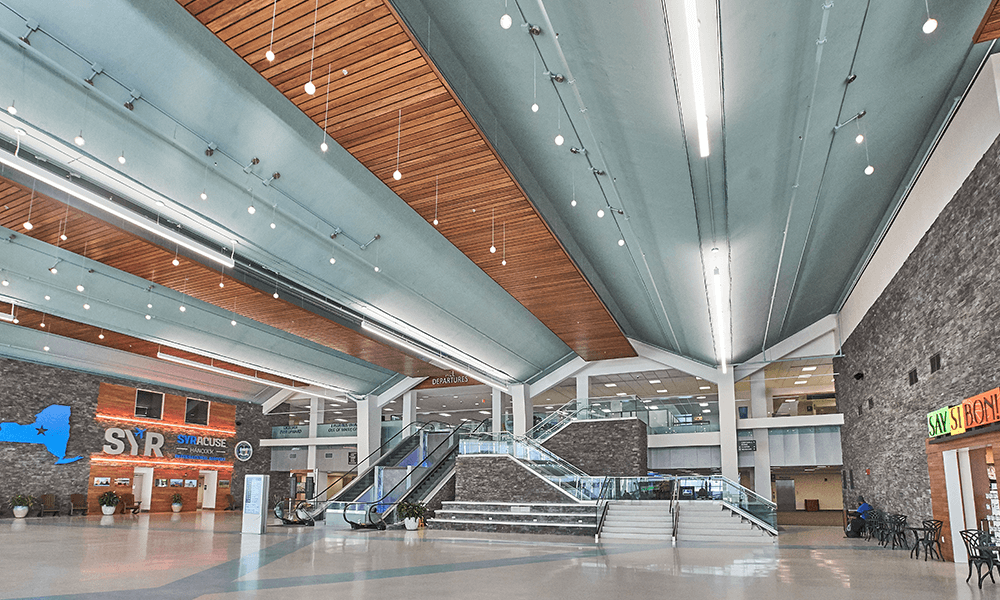 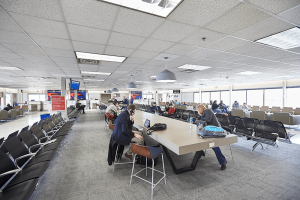 Officials with the Syracuse Hancock International Airport say their travelers’ journeys no longer begin when they arrive at their destination — it starts at the airport itself.

The year-and-a-half construction project that wrapped up at the end of 2018 has completely transformed the terminal. Visitors may not recognize the building at first glance. The airport’s former concrete exterior and canopy have been replaced by a 25,000-square-foot glass and aluminum wall and an eye-catching 25-foot-tall blue “SYR” sign.

Jennifer Sweetland, airport spokesperson for Hancock, says the front façade is just one of many changes that were specifically designed to improve the passenger experience.

“The intention was to offer a welcoming space and to offer passengers an opportunity from when they pull up to the curb to go into the checkpoint to go into the gate to kind of see the steps in front of them,” Sweetland said. “That’s the intention of the glass curtain wall, for them to come in — whether they are parking and walking in from the garage or whether they are being dropped off — they can see inside, they can see their ticket counter, from their ticket counter they can see where they need to go to the checkpoint — all making that transition seamless for them and easier.” 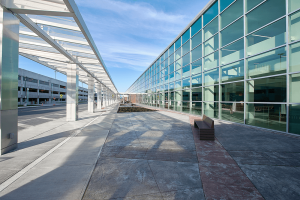 The natural light from that glass wall adds to the warehouse-size appearance of the terminal’s grand hall. Inside are brand-new ticket counters, car rental counters, baggage claim, and in the center of the room a stone veneer staircase with a mini-water fall that leads to the airport concourses. But the changes are more than just cosmetic. Passengers will appreciate the terminal’s new USB ports for charging electronics, improved WiFi service, renovated bathrooms, and new elevators and escalators.

Perhaps the most unique addition to the terminal is the Regional Aviation History Museum that displays the history and evolution of transportation in Central New York. The exhibit features interactive displays and aviation artifacts curated by the Onondaga Historical Association. Sweetland says it’s a project that has been in the works for years.

“We have always wanted to be able to provide some type of aviation museum for folks to come and see how we have evolved here at the airport and over at the New York Air National Guard 174th Attack Wing and this was the perfect opportunity,” Sweetland said. “It’s a great way to spend either a Saturday or Sunday morning with your children to be able to walk through a museum without paying a fee, and it’s representative of our region. And it’s great for people who are meeting and greeting their family at the airport. If they have some time they can walk through the museum and spend 45 minutes or an hour while they are waiting.” 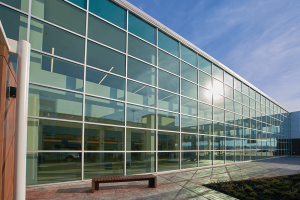 Half of the funding for the Terminal Improvement Project came from a state grant Hancock won in 2017. The other half came from the Federal Aviation Administration, Onondaga County, and the Syracuse Regional Airport Authority. It builds on other investments Hancock has made in recent years – including an improved security checkpoint, baby care/lactation rooms for nursing mothers, pet relief rooms, a pet therapy program, and a new “Fly Guide” ambassador program where volunteers welcome new visitors to the area.

Michael Lazar, a member of the Syracuse Regional Airport Authority board, said these changes have helped Hancock come a long way from the aging airport designed in the 1960s to the now-modernized facility that reflects the services and amenities that other airports are offering in the 21st century. And Lazar says the public is certainly taking notice. One passenger who had not visited the airport in several years was so surprised by the renovations that he questioned if he was in the right airport.

“The gentleman stopped, took out his boarding ticket, and says he just wanted to verify that the flight that he was on was to Syracuse,” Lazar said. “The transformation at Syracuse was so dramatic he thought maybe he landed at the wrong airport.”

That impression has implications for more than just those who work at Hancock, Lazar says. It makes a difference to the entire surrounding community that depends on the airport. 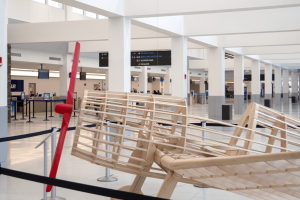 “Many prospective employees, students, business decision makers, and tourists come through Syracuse,” Lazar said. “First impressions are very important. We want to say, ‘Welcome to our forward-thinking community. We are investing in our future and we would like you to be a part of it.’”

The changes may already be paying off. Lazar says the number of direct flights from Syracuse are on the rise, as is total traffic. Last year, the airport experienced its highest number of passengers flying into and out of Syracuse in a decade. In addition, Frontier Airlines started service at the airport in 2017 and Allegiant Air is now expanding the number of nonstop routes it offers out of Syracuse.

Sweetland says she isn’t surprised considering how supportive the community has been about the latest changes to Hancock. The airport has received a lot of positive feedback from its customers by mail and online, and many are even posting pictures of themselves on social media in the improved building.