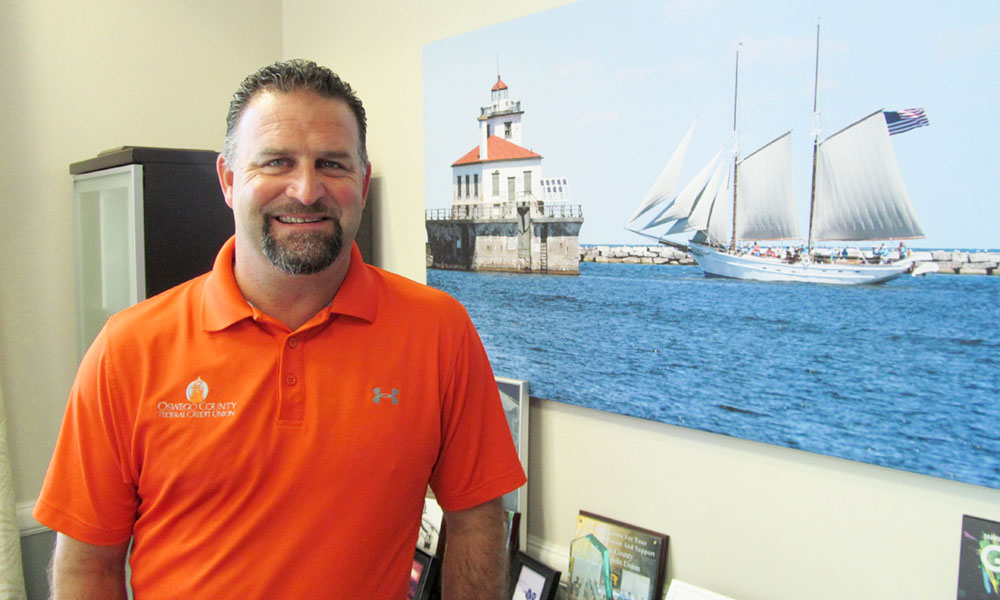 CEO Bill Carhart at his office at 90 E. Bridge St. in Oswego.

In the wake of COVID-19, credit unions across the nation are adjusting to widespread economic disruption while bracing for a possible recession.

Oswego County Federal Credit Union is using both adaptability and empathy in response to these challenging circumstances.

OCFCU has been providing loan assistance and deferrals for applicants who have lost their jobs or have not been able to work during the public health crisis.

It also waived fees due to the crisis.

“We have been able to meet all of our members’ needs via our drive-thru windows, our online banking and mobile platforms, and our text concierge product,” he said.

All of its loans are being securely signed electronically and notarizations are being done via the drive-thru.

“We have tried to communicate with our members that we are here to help today, tomorrow and in the countless days ahead with any challenges they may have meeting their financial obligations,” he said.

A positive that has occurred during this unprecedented time is OCFCU becoming a Small Business Administration (SBA) lender to help grant Payroll Protection Program loans for small business owners.

“They are the lifeblood of this community and the economy as a whole,” he said.

OCFCU was expected to allow members to reenter branches at the eastside Oswego location as well as Fulton and Mexico offices in a limited fashion beginning on June 8.

Reopening plans are a function of the community maintaining a low level of infection.

The west side Oswego branch will not be immediately reopening because the branch is small, making social distancing difficult.

Carhart said he believes one of the keys to successfully reopening the local economy is a slow, structured approach that monitors infection spikes and new COVID-19 cases.

“This virus will not simply go away as life goes back to normal; some aspects of life will never be the same again,” he said. “Vital to a successful recovery will be people who understand this reality.” 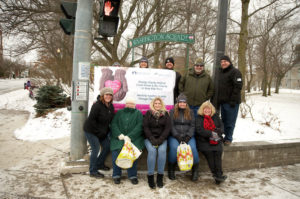 Carhart said one of the keys in realizing an asset growth of 427% was by controlling the rate of growth.

He noted another key to the credit union’s growth was a “laser-focused” business plan that focused on reducing the average age of its membership.

When Carhart arrived at the credit union in 2004, the average member was 49 years old.

“Through a concerted effort of introducing new technologies and employing a work force of younger adults, we have been able to reduce the average age of our members to 41,” said Carhart, noting that more than 40% of membership households are under the age of 41.

Another vital key to OCFCU’s steady growth has been its commitment to and support for the communities it serves.

“We believe we have a civic duty as a local business to make investments to improve the quality of life for everyone within the communities we serve,” he said.

Carhart, a SUNY Oswego graduate, said a main key to the credit union’s success is staff.

“They are 100% committed to providing our members with the very best in member service, going above and beyond to help members realize their financial dreams,” he said.

The credit union has four branches and added a new satellite office at the Center for Instruction, Technology & Innovation in Mexico in January. 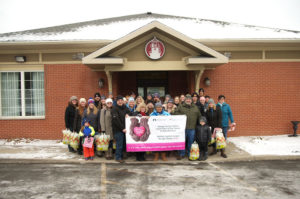 Another aspect of the business that has significantly added to its growth is a high level of volunteerism among staff, Carhart noted.

“I would say with certainty that members respond very positively to seeing credit union employees at community events or our own events,” Carhart said. “Giving back to the communities we serve is critically important to our entire organization from the board of directors all the way to our newest family members and employees.”

Last year, OCFCU started a volunteer of the year award for staff.

Mary Greeney, vice president-community and events coordinator, was the award’s first recipient. Not only that, but the award is named after her.

Greeney, who will mark her 25th anniversary at the credit union in June, said this recognition carries significant meaning for her.

“I’m totally all about helping our community and doing fun things for our kids,” she said. “I’ve lived here all my life and almost all my family is here, so this community is important.”

She said OCFCU and its family of employees enable her to “do all the wonderful things that we do for our community.”

“And without my fellow co-workers who volunteer, this wouldn’t be possible. We are a terrific team and it honors me to be remembered this way in the future,” said Greeney, noting that during her tenure she has played key roles in launching many of the credit union’s events.

Normally the credit union sponsors “Movies in the Park” on Wednesdays of each month during the summer with venues set up at local parks in Mexico, Fulton or Oswego.

Carhart said a brick-and-mortar presence is still necessary today in an age when online and mobile banking are playing significant roles in the industry.

“Brick and mortar, while viewed as antiquated by some, is critical to our operations,” he said.

Virtually every study conducted on consumer behavior indicates that members want the reassurance of brick and mortar even if they don’t utilize the facilities often, he added.

“They like the fact that if there is an issue with their account, or they have questions, they can stop into a branch to work with staff, face to face. It is important however to have both online and mobile access, which we do,” he said.

“I believe credit union members enjoy being treated as a name, not a number,” Carhart said. “They enjoy the personalization and being greeted by their first name, greeted as a family member.”

Carhart said one of the most significant technological changes that have occurred is the escalation of mobile phone usage versus laptop or desktop personal computer usage.

For several years, OCFCU has offered a text banking solution — text concierge — that allows members to conduct almost all their financial transactions securely via text.

“By the end of the year, we hope to be able to offer text lending, which would allow members the ability to apply for a loan, sign the paperwork electronically and fund the loan however they need to,” Carhart said. “We have found that by and large all texts get read as opposed to other electronic communications.”

“We offer several unique products that other institutions in Oswego County do not offer,” he noted.

These include the text concierge service, its Scholars Dollars Club which pay youngsters $1.50 for every grade over 90, and the rebate checking product which pays members 2% on their checking account if product requirements are met.

After the opening of its second location, the credit union had grown to feature $27.4 million in assets.

OCFCU’s third branch involved a complete restoration of a historic railroad depot at 5828 Scenic Ave. in the village of Mexico in 2010.

Its latest branch was opened in January as a part-time satellite office within the Center for Instruction, Technology & Innovation in Mexico.

“Some of the main ingredients that helped us grow membership by 167% was by offering a mix of products and services that no one in the area offered,” Carhart said.

He said the credit union takes “great pride in treating our members like family.

“This approach has resonated to the members, as a great deal of new members come to us via word of mouth. No one conveys the value of an organization better than its members can. There is no better endorsement.”