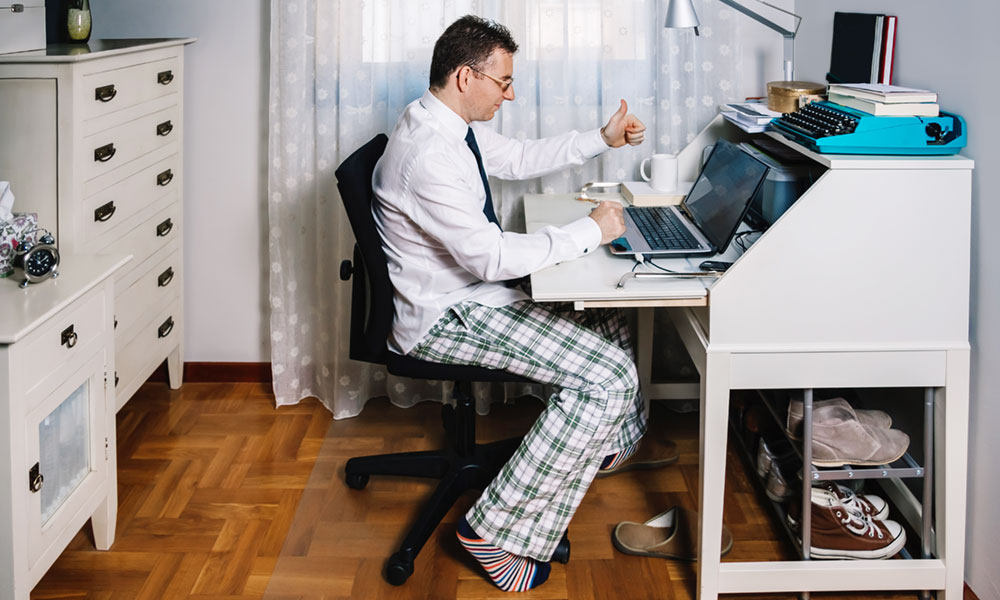 During the worst of the COVID-19 pandemic, many companies figured out ways for their employees to work from home.

Could this shift kick off a growing trend of working at home?

John Timmerman, CEO of Good Monster, a digital marketing company in Clay, thinks it could.

His company had worked in a traditional office setting for its first four years, and then three years ago went all remote.

“We found it’s more efficient and our team members are happier because they don’t have to commute to an office,” Timmerman said.

Timmerman is also co-founder of the No Bull business conference and CEO of Jaxon Jovie, a company making athletic cut jeans.

He said that employees in each company liked having more time to spend with their family and doing whatever else they want.

While a happier workforce can help companies reduce costly turnover and boost productivity and morale, the biggest reason many companies will stay remote is that they can dramatically reduce overhead in ways they had never thought possible before.

“We will come out of this current situation with a large number of businesses realizing they can save $50,000 on rent without having an office,” Timmerman said.

Of course, texting, phone calls and emails help; however, Timmerman said that video technology helps remote workers “maintain a level of social interaction and have meetings to make decisions. Companies are signing million-dollar deals via video chat instead of flying across the world.”

Working at home may seem like a license for slacking off; however, that’s another area in which technology makes all the difference. Timmerman said that using Hubstaff software allows employees to track their work by project, time and client. The software also takes screen shots of the work in progress and can use GPS tracking for companies that operates job sites, though that’s not relevant to Good Monster.

“All of this tech did exist before; it’s just making it easier for business to make the transition to remote working,” Timmerman said.

He added that at the beginning of the COVID-19 quarantine, so many people working at home and streaming for non-work purposes strained the internet. He believes that internet providers will continue to expand their capacity to handle the workload as people continue to work at home.

Timmerman said that people who work remotely usually are much more willing to sacrifice to get a task done since they have more freedom and flexibility. Work a holiday? No problem. Work late? Not a big deal.

“That’s because they can take off a random Tuesday at other times,” Timmerman said. “It’s changing the way that the normal 9 to 5 goes. It’s erasing it. They’ll work on a Sunday because they have Tuesday off.”

Another effect he has noticed about the surge in remote work is reduction in the stigma of working with one’s children around.

“I’m literally feeding my newborn son with a bottle as we’re talking,” he said during the interview. “I had a call where we were signing a mid-six figure deal and the CEO had her young children running around. I had my kid in the carrier and hers are asking her to play a game with her. Times are changing. Whether forced or the pandemic, it’s becoming real. And people realize it’s OK to have a family and a child crying in the background. It’s human. We’ll have remote work and babysitting kids while juggling work. It’s not viewed as negative that you had to leave to pick up your child.”

He added that instead of viewing parenting and work life as incompatible, business professionals are beginning to view parents are more relatable, accessible and trustworthy. Timmerman also believes that working at home will equalize childrearing and housekeeping tasks between the genders, away from the more social norm of women taking on the majority of those tasks — partly because more men are present at home and more aware of how much work women do at home.

“The guys are getting it,” Timmerman said. “I am all for giving her as much time as she needs to be productive. Women have just as much human need to be productive as men do. The opportunities for parents to do things in this day and age with this internet-driven society is just going to be a greater collective family work mash-up.”

Timmerman said that he has enjoyed staying home with his wife, Lindsay, after she delivered their child, both to help her and to get to know his son better than he would have if he had worked away from home.

As another advantage for businesses, remote working can help reduce missed work days because of a childhood illness that keep kids home from daycare or school.

The societal shift to a virtual office hasn’t affected Deb Coman, owner of Deb Coman Writing, Editing & Coaching in Syracuse. Everything she does is online.

“There’s a lot of benefits and flexibility,” Coman said about working at home. “In some ways, it may lead to better customer service. That will be another interesting thing to see.

“I think it’s been the trend but something like this pandemic pushed it along.”

She views the improvements in business as some of the good that has come from the pandemic, such as enabling employees to work at home, improving business processes and increasing efficiency.

Coman thinks that more companies are working to improve their online presence as consumers turn to online shopping, delivery and entertainment more than ever.

“In order to get those clients, you have to have an online presence that attracts your clients,” she said. “You have to find that audience online and nurture them.”

And of course, many of those creating content such as that are working at home, like Coman.