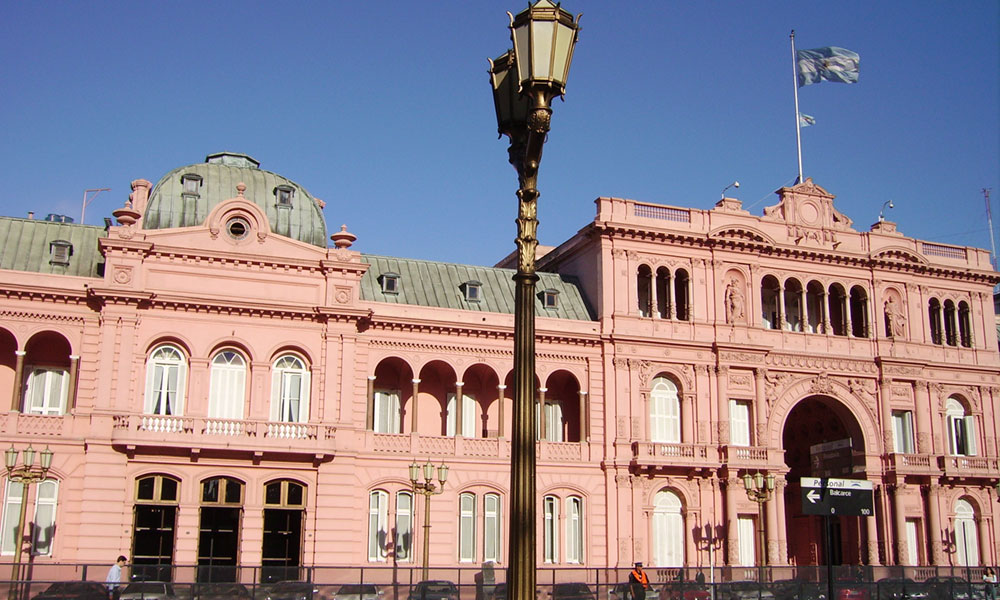 Casa Rosada, the iconic, balconied presidential palace in the center of Buenos Aires.

Argentina’s capital, a place to enjoy the tango, parrilla and wine

The people of Buenos Aries refer to themselves as “Porteños,” people from the port city. Visitors familiar with Spanish will find the Argentine accent different as it has an Italian influence, including the sing-song rhythm that the Italians use.

“Don’t cry for me Argentina,” is the iconic song from the movie of Evita Peron’s life. It was from the balcony of the Casa Rosada that she addressed her adoring countrymen. Interestingly, Argentinians are not fans of the movie.

María Eva Duarte de Perón was the wife of Argentine President Juan Domingos Perón and first lady of Argentina from 1946 until her death in 1952. Recoleta Cemetery with its elaborate tombs would be worth the visit even if Evita was not buried there. The body of Evita after her death is as interesting as her life. Three years after she died of cancer in 1952, her body was removed by the Argentine military in the wake of a coup that deposed her husband. The body then went on a transatlantic odyssey for nearly 20 years before finally being returned to the Duarte family mausoleum in Recoleta Cemetery. She now lies in a crypt five meters underground, heavily fortified to ensure that no one can disturb the remains of Argentina’s most beloved and controversial first lady. To learn more about Evita, visit her museum where the emphasis is on the good Evita did for her country.

While Evita Peron may be the most famous Argentinian, tango will always be synonymous with Argentina. Tango is a musical genre and accompanying social dance originating at the end of the 19th century in the suburbs of Buenos Aires. The Buenos Aires’ neighborhood of La Boca is famed for tango, its colorful houses, and its soccer team — a must visit. The centerpiece of La Boca is the cobblestone strip El Caminito, or little walkway. The one-time railway route is lined with the bright facades that make La Boca postcard perfect. Named for a 1926 tango song, the pedestrian lane features an outdoor fair where artists sell their wares and tango dancers prance along the sidewalk in between photo ops. Some street performers will even grab volunteers and teach them a few steps.

Dining at a parrilla while in Buenos Aires is another must-do. Argentina, a country of carnivores, has the second-largest per-capita beef consumption in the world. “Parrilla” means grill, and refers to the open-fire hearth and grates where meat is cooked. Parrillas are everywhere and the meal should include Argentinian wine. Argentina is the fifth largest producer of wine in the world. The wineries and beef ranches are outside of Buenos Aries but no dining experience is complete without wine and beef.

One of the best ways to meet a local and learn about the city is with a cicerone, a greeter who provides a free tour to special places off the beaten path. The arrangement needs to be made at least two weeks in advance. American visitors only need a valid passport for a stay of 90 days, and no longer have to pay the $160 reciprocity fee. The Argentine peso is the currency. Go online and print a handy cheat-sheet for the exchange rate; it saves brain space when dealing with foreign currency.

What type of marketing do you find most effective?