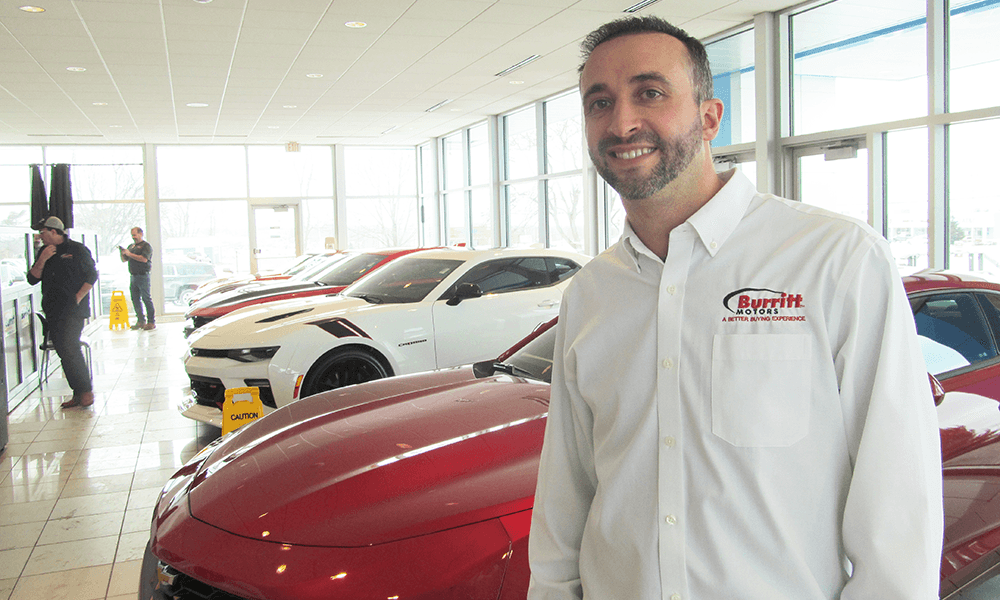 The Burritt dealerships in Oswego generated $89 million in business in 2018. After the completion of a major project that’s underway, it’s expected to generate more than $120 million annually.

1. Can you update us on your new store, Burritt Chrysler Dodge Jeep Ram? What were some of the challenges involved in making that acquisition?

I acquired Shapiro Motors in Oswego in 2017 and with it came the Chrysler, Dodge, Jeep and Ram brands. I am leasing the building from Shapiro Motors until November of this year.

We kept the same staff, and have more than doubled sales while turning a profit.

I have two general managers at both the Chrysler store and at Burritt Motors Chevy Buick on state Route 104 East in Oswego.

I employed the same business model and process that made us successful at the Chevy store. We implemented the same policies and procedures and replicated them at the Chrysler store.

We had individuals doing things a different way at the Chrysler store, and we had to get the culture to be the same. That culture now is one of accountability and setting and achieving performance standards.

I earned and gained the trust of my new staff while establishing more discipline and accountability. This is now a performance-driven culture. Every single person runs a business inside a business, and every single one has to make good business choices. I train my personnel to be able to stand on their own accord.

This approach generates high levels of stress and risk, but incomes are performance-based as employees receive a percentage of revenue and profit. They inherently carry a similar risk as I do.

The work environment at the Chrysler store is definitely more rapid and there is a very noticeable change in the business culture.

Once the lease expires, [the building] will go back to the Shapiro estate.

2. Can you tell us about your new project and what it is going to entail?

Construction on the project is expected to kick off in March, and the plan is to have the facility complete by November. At 31,000 square feet on a 15-acre parcel, it is 1,000 square feet larger than the Chevrolet store and that is without a body shop. It will be located between the Chevy store and Lake Ontario Prompt Medical Care on the east side of Oswego.

The Chevy store will remain intact and will complement the new facility.

Featured will be two Touchless Car Washes, an Express Quick Lube and tire center, multiple service bays, a rustproofing and undercoating facility, and two food trucks for customers and the public.

The facilities will feature a combined inventory showcasing six franchises. There will be about 600 vehicles available for sale.

We also want to delve more into dealing in commercial vehicles as well.

The $10 million facility is going to be only one of three dealerships in the state and one of 15 across the nation to feature the new Chrysler-Dodge-Jeep-Ram prototype building.

The facility will have an exclusive stand-alone showroom for Jeep and also a showroom designated strictly for Dodge-Chrysler-Ram products.

3. What kind of revenue do you expect after the new project is in place?

Between my two stores today, I employ 72 workers and project that number to be at around 117 within five years.

In 2018, we did $89 million in business, and are projecting that figure to be more than $120 million annually once the project is complete.

Between wages, sales tax and investment in the facility, the project is creating a significant economic impact in the area.

‘The trend of dealer groups acquiring other smaller dealerships is a trend that will be apparent over the next several years. The reasons are margins have become compressed, factory requirements are getting more stringent, and the presence of the internet.’

4. What changes are you seeing on the automotive landscape?

The trend of dealer groups acquiring other smaller dealerships is a trend that will be apparent over the next several years. The reasons are margins have become compressed, factory requirements are getting more stringent and the presence of the internet.

We are the only large dealership in a city that used to feature at least a half dozen. The same has happened in Fulton, where there are only two large-scale dealerships in Par-K Enterprises and Longley Dodge.

Many of the large dealerships are publicly traded companies, such as Lear.

They are OK with a 2 percent return, and local control and direction is lost when auto dealerships are publicly owned. I was happy to not let that happen here.

5. How would you describe your managerial and leadership style?

I am a true Walt Disney fan, not to the extent of its famous characters, but of its business model. Disney grosses a combined $13.6 billion from its six domestic parks annually.

I’ve studied the Disney business model, and have also exposed its sure-fire methods to my employees.

Disney has the world-class ability to turn intellectual properties into successful movies and additional business opportunities in other segments.

Disney World in Florida was swamp water in the middle of nowhere, similar to Oswego. Our economy isn’t the best, and you don’t hear too many people say, “I’m going to Oswego to open up business ventures.”

However, I am intent on developing destination points to place Oswego on the map.

6. Are you relying on outside financial assistance to make your project a reality?

I estimate the first phase of the project to cost approximately $10 million. Once the second and third phases are complete, that figure could very well be doubled.

I sunk $3 million when I acquired the Chrysler store to be able to operate it efficiently, and foresee another $1 million in liquid capital being injected into this new project.

Both Pathfinder Bank and the Oswego County Industrial Development Agency, led by L. Michael Treadwell, executive director of Operation Oswego County, have worked with me to preserve working capital.

For businesses that can’t grow, it’s not because they are not good at making money. They simply don’t have it.

The IDA is adept at gap financing, which preserves my working capital when it comes to purchasing equipment, tools and technology.

7. You have succeeded your father, Chris, who retired several years ago. How influential of a role does he play in your life?

He is excited about the project yet is making sure I don’t bite off more than I can chew. My father has always stressed giving ultimate care for employees and guests, much like that espoused in the Disney model.

He’s always been a visionary, and has always done things ahead of the trend. Back when we were a smaller dealership, he was adept at launching initiatives before they were popular.

He gets people to respect him. When you build trust within your staff, it leads to mutual respect.

You’ve got to have a solid team with people that you trust, and solid relationships outside as well. My father is a phone call away, but I don’t go there frequently because we have things under control.

It’s stressful and there is a lot of anxiety, but it’s a challenge. At times, it is tough to stay present while at home with my wife and 2-year-old child.

I try to make sure I keep a solid work-life balance. I try to be more efficient while I am here and more present at home. Sometimes it feels like I am a ping-pong ball, but I have to practice good discipline.