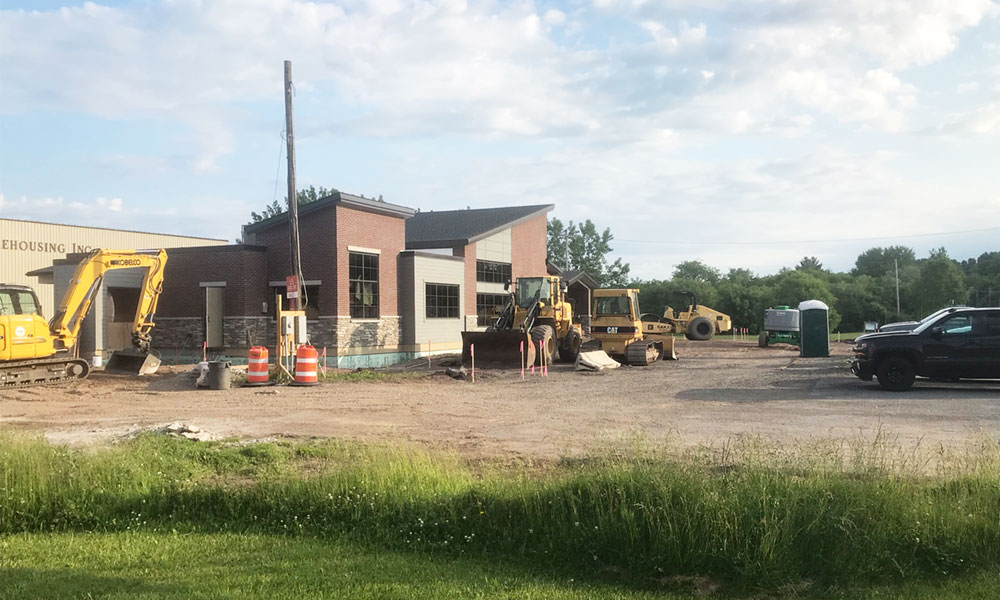 Construction of the new 3,400-square-foot branch of Compass in Fulton was nearly complete on June 9.

Compass Federal Credit Union is readying to open its new branch in Fulton, beginning a new chapter for the financial institution that was established in 1966.

Construction is expected to be complete by the end of June at the new branch site, located at 208 N. Second St., according to Dan Kapuscinski, marketing administrator for Compass.

The new 3,400-square-foot building is at the corner of Shaw and Hubbard streets, near Davis-Standard.

Staff will then need to set up shop, and no official opening date has been established yet. However, Kapuscinski said the opening should occur in July.

COVID-19 has not impeded the construction project, but staff was separated during the height of the pandemic for several months, which slowed down other processes.

Kapuscinski said Hayner Hoyt Construction Company of Syracuse, which is handling construction, is doing an admirable job in adhering to COVID-19 guidelines, such as practicing proper social distancing.

“They are doing what they need to do to keep working out there,” he said.

This will be the eighth location for Compass.

Its main office is located at 131 George St., Oswego, and it also has locations in the Port City at Novelis, 448 county Route 1A; Oswego Hospital, 110 W. Sixth St.; SUNY Oswego, 150 Marano Campus Center, and at Hillside Plaza, 7 Fourth Ave.

The new branch will replace the current Fulton branch location located in the Canalview Mall. Compass also has a location at Davis-Standard in Fulton but is open there on a limited basis.

Kapuscinski said the new location of North Second Street is ideal as it features a heavily trafficked area. “I think it will work out not only for us but our members as well,” he said.

He also noted the present Canalview Mall location “isn’t the most out-front location. It can be hard to find and is not very visibly appealing for people trying to find it.”

Schopfer Architects of Syracuse handled the design of the new building, which features a blend of modern elements with optimal flow for members.

“We wanted to better our presence in the Fulton area, even before all these improvements were going on,” said Kapuscinski while referring to the revitalization occurring in a city that received $10 million in state Downtown Revitalization Initiative funding in 2019.

“Obviously, everyone can feel the growth in Fulton and where the city is moving in the future,” he said. “That was an even better reason to invest in Fulton and put this location right in the forefront of the city.”

Kapuscinski said Compass enjoys a significant flow of traffic at its current location at Canalview Mall. “We anticipate to ramp up even more with a much more visible location,” he said.

Kapuscinski noted new staff will be added at the new Fulton location, although that number is unknown.

Compass plans on supporting a Bank at School program and intends on being active in the Fulton community.

Running each year from October to May, the Compass Federal Credit Union Bank at School program offers Oswego City School District students an opportunity to deposit money into their own account.