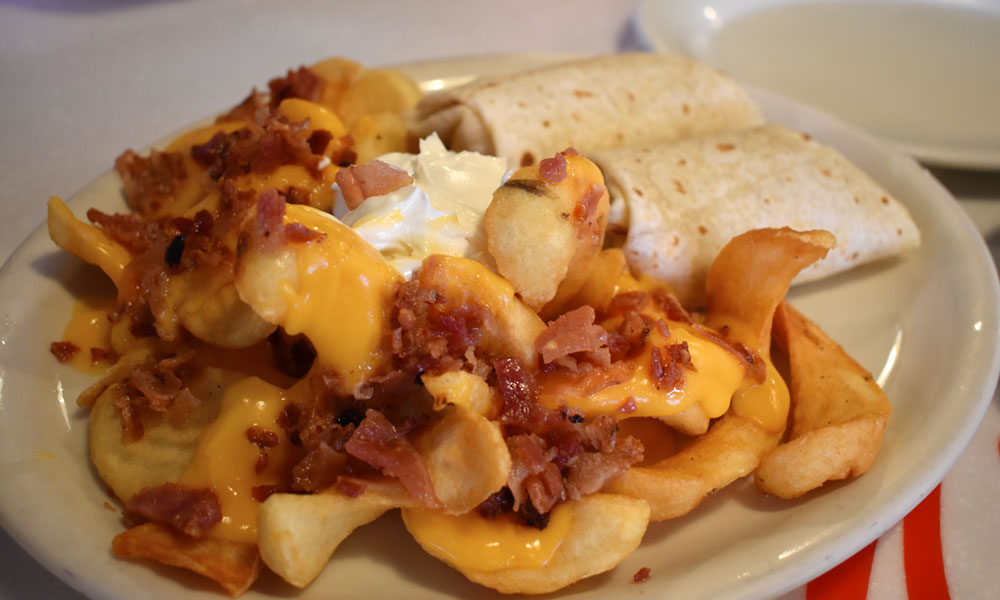 A guilty pleasure everyone can agree on: The loaded twisters for breakfast ($6.29) at Mimi’s Drive-In in Fulton.

Mimi’s puts the “full” in Fulton

I’ve been on a diner kick, which made choosing Mimi’s Drive-In in Fulton an easy first-choice when narrowing down the restaurants for this review.

There have been numerous times where driving by the restaurant on state Route 481 has caused my curiosity to spike, my mind to demand and mouth to water despite not ever tasting the food.

It’s been said before. I’ll continue to say it over and over: There’s nothing like the great American diner.

The food is simple. The décor varies from sparse to organized clutter, themed to eclectic. The counters are long and booths are aplenty. Clanking and clicking utensils are amplified. The coffee mugs are as deep as the patron wants them to be. The art of conversation is raw and topics are infinite, and the banter with staff is kind, joking and even sarcastic.

Diners, like Mimi’s, are for families, the elderly, dating couples, and solo travelers — everyone.

The inside of Mimi’s is a diner fever dream and lives up to the aforementioned characteristics. For these days of living with restrictions, the place and tables are very clean. The utensils sitting on the napkin were spotless. The patrons were packed in to maximize service; although the tables were spaced appropriately apart, it felt like close quarters.

Everything felt safe but the question lingering: Are we going to be able to readjust to pre-COVID-19 dining when that time comes? I hope so.

Upon entering, I was greeted as I made my way to where my local business advocate friend Anthony was seated. Put two Italians in a diner — we’re ready to dig in. We kicked off the meal with two cups of coffee (give or take $1.75 each), which were religiously refilled.

All of the food came out at once, which proved to be a decent spread. We first grabbed at the breakfast wrap. The typical-sized wrap was filled with eggs, cheese and meat; we opted for ham. The wrap was a flour tortilla that was warm and consistent as far as softness went. It wasn’t overly rigid in spots nor was it too chewy. The combination of the egg, cheese and meat wasn’t bland either.

The French toast ($3.59 or $1.20 for one) is unapologetically basic. The yolky yellow and singed brown markings were flawless and felt leopard like. It was appropriately soft. The toast didn’t come with powdered sugar but a tiny cup of whipped butter, not the hard stuff, which spread smoothly.

The pancakes ($3.59 or $1.20 for one) are unapologetically basic as well. “What you see and taste is what you get” — their motto, presumably. The semi-flat flapjack was soft and slightly crispy around the edge. On the side sat another cup, slightly larger than a thimble-size, of whipped butter. I’d return for another stack any morning, afternoon or night, because breakfast is served all day.

The loaded twisters ($6.29) came as a shareable side. These twirled fries came topped with ballgame nacho cheese from the pump, diced bacon, and a dollop of sour cream. Sports or no sports, this is truly a guilty pleasure everyone can agree on. The fries were nice and crispy — none were burned. It was an unabashedly messy ordeal, but messier is better.

Then there was the western breakfast ($7.99). My eggs came over easy, as requested. The toast was thick-sliced Italian bread, toasted to golden brown perfection. The sirloin — meh. The portion of steak was a great portion, cut of steak was OK, but the overall flavor was blah.

It’s a typical fallacy with diners and steaks — I have yet to find one I’ve enjoyed. Mimi’s steak is unfortunately part of the club. It wasn’t seasoned, very fatty, and came out much more done than requested. It wasn’t a complete disappointment because the overall combination of steak, eggs, and toast paired well. It just wasn’t a highlight.

Will I go back to Mimi’s? Absolutely. Mimi’s also proves that eating from a local business is better than a chain or fast food joint. The experience, before tip, totaled $27.50, but the inexpensiveness isn’t a deciding factor.

I can’t wait to try more food, especially lunch and dinner options. There was a meatball special on the menu that day and the hot meatloaf sandwich on the regular menu, which called out to me.

Return of the Drive-In