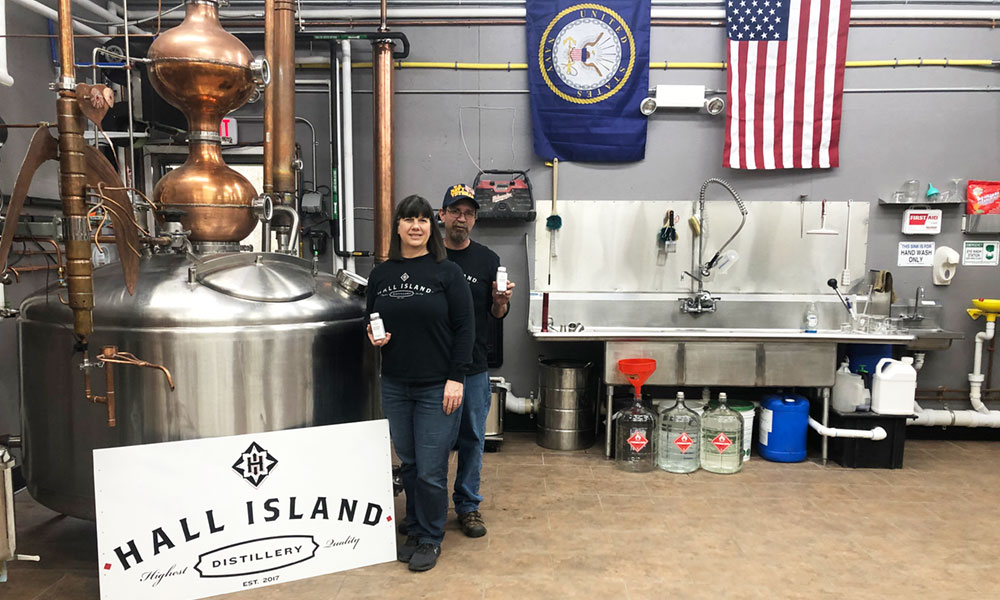 Ann and her husband Dave Benton, the owners of Hall Island Distillery in Cicero, shifted from making vodka to making hand sanitizer.

During the pandemic, some businesses have shut down, shifted where they work or changed how they work, but some have been able to change what they do to help their community.

“It all started when I heard about a shortage of masks for frontline workers, specifically hospital employees and EMTs,” Cortini said. “We have the machinery and material, so I thought why not try to help out?”

He fashioned his first mask March 14. It took about four hours to make that prototype. Many of the patterns available on social media were intended for a home sewer who might make a dozen or so masks.

“I had to figure out how to make a large quantity in as little time as possible while remaining the integrity of the product,” Cortini said.

He and his employees came up with a proprietary design that enabled them to produce about 100 masks daily. While the demand began to taper off by mid-May, the shop was able to donate 1,500 to organizations like Oswego County Opportunities, Oswego Health, Fulton Police Department, Syracuse VA and also to anyone who came through the shop.

“If they wanted to make a donation, it would be accepted,” Cortini said.

He bought a few hundred yards of fabric, either 100% cotton or a cotton/polyester blend, depending upon the application. Cortini had family members helping and one employee. Since his shop was deemed an essential business, he remained open. That has helped his shop survive during the shut-down.

Cortini said that even though his business was deemed essential, that didn’t necessarily bring customers through the doors. Making an item they need — masks — brought customers.

“I’m surprised that a lot of businesses didn’t pivot to be able to serve the public, given the restraints placed upon us,” he said. “You need to figure out how to make it work.”

In addition to creating a replacement revenue stream for the spirits — sales dropped off during the height of the pandemic — making sanitizer also created a lot of positive public relations for the young company.

It began when Haun Welding Supply in Syracuse contracted Benton to make a sprayable sanitizer to clean medical equipment in hospitals and nursing homes. That led to Hall Island making 70% alcohol sanitizer for general use. The distillery obtained licensure and began making sanitizer to World Health Organization standards.

“We made vodka and turned it into hand sanitizer,” Benton said.

Hall Island used all local ingredients the company already had in-house. The company donated sanitizer to numerous local fire departments, healthcare providers and municipal organizations. Though demand for both liquor and sanitizer have decreased now, Benton said that the experience has been good for Hall Island.

“It’s hard to start a new company and bring a product to market, as there’s a million kinds of vodka on the market,” Benton said. “We can’t do tastings now, and people like to taste spirits before they buy. I think that making the sanitizer will help since it’s good PR.”

“It’s great how every one seems to be looking for a way to get involved, to help out,” Jason Hatch, general manager at Lock 1, told the Post-Standard in mid March. “This is our way, by using what we know how to do to help out.”

For some companies, it’s not what they can do, but supplies they have on hand to give during a crisis that makes a difference.

The Hayner Hoyt Corporation, a construction firm in Syracuse, has performed substantial work for St. Joseph’s Health and Crouse Hospital.

“We buy personal protective equipment at the beginning of the year, so we were happy to share,” Thurston said.

The company donated 1,200 masks to St. Joseph’s, and the same number to Crouse.

“We gave them as much as we thought we could and kept a small supply for ourselves for the next few months,” Thurston said.

The company ran short on masks and had to restock through a supplier that cost more than normal; however, Thurston is still glad that the company gave the masks.

“It’s the right thing to do,” he said. “It was heartbreaking the number of people who needed masks.

The company benefited through positive press about their generosity.

“Even though we suffered shortages, I still wouldn’t have changed what we did,” Thurston said. “If we could’ve given more, I would have. The frontline workers potentially put their lives on the line. It’s the least we could do. I’d do it again in a heartbeat. It’s a time we have to rally together.”

“When we run out of things we’d typically do, it allows us to be more creative, to tap into new ways to serve people,” said Deb Coman, owner of Deb Coman Copywriting in Syracuse. “What we will create will catapult us further. I think that’s possible for almost everyone.”

Comen added that a company that pivots and adapts its goods or services will not only keep the doors open, but also garner some really good public relations from their efforts.