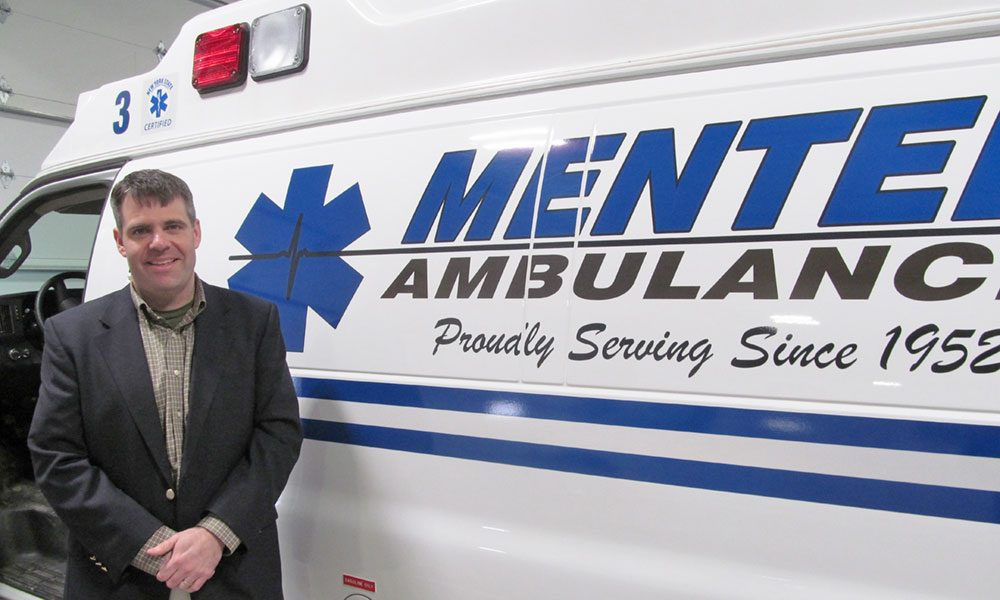 Zach Menter is president and CEO of Menter Ambulance in Fulton, Oswego County’s largest ambulance service company. The business employs 160 workers. It was started in Fulton by his grandfather, Alfred Menter, in 1952.

Some say the true measure of a person is determined by how well they respond to a crisis.

For Zach Menter, president and CEO of Menter Ambulance in Fulton, he has made a career out of helping others avert their own personal disasters.

“When you know the service you run has made a difference in someone’s life, that makes you feel good,” Menter noted.

He gains gratification when an employee goes out and does something significant.

“A child or loved one is here because of what we have done,” he said. “It may be as simple as someone who was kind enough to somebody to make a difference.”

Menter is a third-generation owner of a family business that has experienced significant success since its humble beginnings in 1952.

When his grandfather Alfred started Menter Ambulance in 1952, he managed to get a loan from a local health care professional after he was unable to acquire a loan through a bank at that time.

Alfred, who came from a farming family in Fulton, was an innovative thinker and saw the need for an ambulance service. Alfred and his wife also operated a taxi service.

He bought an existing service from Frank Spaulding, who had two hearses and an ambulance that were used interchangeably at that time.

In 1956, he decided to incorporate as Oswego County Ambulance and Hearse Service, Inc. with the dream of servicing the entire county.

He had already been functioning as Menter Ambulance for four years, and the name had become a household name.

Over the past year, a rebranding process took place and the name Oswego County Ambulance and Hearse Service, Inc., dba Menter Ambulance was established.

When Alfred opened the business, it was run out of his house at 760 S. First St. in Fulton.

He would later move the business to 13 Nestle Ave., where Zach grew up.

Menter Ambulance is headquartered at its new location at 404 Ontario St., Fulton, which was established last December.

The business’ growth has led to establishing locations in Oswego and Central Square as well.

The ambulance service industry has seen changes that include the evolution of first aid, advanced first aid, and emergency medical technicians.

Both the state Departments of Transportation and Health would eventually step in to provide regulatory guidelines for the service.

“I really consider ourselves as being more part of the health care industry than transportation,” Menter said.

Besides Menter Ambulance, he also owns and operates the James A. Menter Funeral Home at 510 Erie St., Fulton, which is also where his hearse service is located.

Both Zach and his father James are licensed funeral directors. They are partners in the funeral home, a separate limited liability corporation.

“We don’t run a full-fledged funeral business, but we do offer services to the public,” he said.

The hearse service contracts with the district attorney’s office for removal of decedents throughout the county.

It also rents hearses to funeral homes that may need them.

James also did a lot of trade work for other funeral homes, and they would contract with him to use hearses, and transport and prep decedents.

However, Zach balked at taking on that significant workload, and trade work later was done on a limited basis.

By the time Zach graduated from high school in 1999, he had already gained experience in dispatching and began studying to be an EMT.

He earned a four-year degree at SUNY Oswego, during which time he gained his EMS certification.

It was 2006 when he first became a partner in the business with his parents and took on a vice president’s role.

Over time, his role became more administrative, and in 2017, he became sole owner as president and CEO.

Zach has three sons, ranging in age from 2 to 11, and says it would be meaningful if one or all of them took over the business some day.

He has even had offers from folks wanting to buy the business, but said he is not going to do anything with the business until his children get old enough to determine if they want to get involved.

“Fulton is my home and I’ve been in Oswego County my whole life. We will see where it goes,” said Menter, who will turn 40 in September.

Menter said he takes pride in the growth of the company under his leadership.

When he first took on a managerial role in the business, there were 50-plus employees. Today, there are 160 workers.

“The business itself more than doubled as far as staff and call volume over a five-year period from 2013 to 2018,” he noted.

Menter said there have been some challenging periods over the past 15 years where growth was difficult.

“In business, any risk you take comes with knowing there might be some tough times ahead,” he said. “It’s important to have a contingency plan in case you have to shift it back.”

He said that is challenging because by nature, people enjoy being able to accomplish something and say it is done.

“The one thing I have learned in this business that I would pass along as advice to my kids someday is it’s never going to be done,” he said. “There’s always going to be a list of something in front of you. You get to times when it’s better or it’s good, but it’s never done.”

Menter said communication is vital to realize a high level of success. Also important is making a conscious effort to not only focus on his perspective, but to gain insight from employees as well.

Menter has a strong managerial team led by Michael Zukovsky, his director of operations.

“He has basically cut his teeth at this business. He worked his way up from a wheelchair driver to an EMT to a paramedic, and now he is director of all operations,” Menter said. “I’m fortunate to have somebody that has gone through all the roles here.”

Steve Sant serves as Menter’s director of finance and administration, while John Medico is systems director and plays a key role when it comes to analyzing and interpreting data.

Jeffrey Andrews is director of training who is responsible for key aspects such as making sure workers are on track to get their credit hours for recertification.

A continuous quality improvement committee is also intact to ensure that workers are doing what they are supposed to be doing on calls and correct any deficiencies in the system.

Meanwhile, Michele Newcomb serves as director of community relations, and is responsible not only for sustaining a social media presence, but also attending to vital networking with the community, schools and other businesses.

Compliancy is another significant component for Menter, particularly in the billing department and working with organizations such as the Centers for Medicare & Medicaid Services.

He said copious documentation is necessary whenever you are receiving funding from federal or state sources.

Other areas that demand compliancy involves organizations such as the federal Occupational Safety and Health Administration as well as adhering to laws imposed through the Health Insurance Portability and Accountability Act, or HIPAA.

An ambulance that is fully staffed and equipped costs about $530,000 a year to maintain, he said.

Payroll is the biggest expense, and Menter said there are significant training costs associated with bringing in new employees, which is why retention is so vital.

In response, Menter is now featuring his own EMT Academy, the first session of which wrapped up recently.

“We have traditionally always hired people with certification, but we still have to have them come and spend time training,” he said.

He recently hired six new employees who engaged in the inaugural EMT Academy while simultaneously orienting themselves to their job at Menter.

“We are truly building the right employee from the ground up, and we can slow down some turnover that way,” he said.

One of Menter’s biggest goals this year is to stabilize his workforce, particular given the national shortage of EMTs.

He is in the midst of turning his former location into a training center.

He said there is less a sense of competition than working on the same team.

“We are more partners and trying to accomplish the same goals and work together,” he said.

Despite spending many hours at the office, Menter said having a proper work-life balance is vital.

“Probably my best friends outside of work are my family,” Menter said. “When I am not here, I am with my family.”

Menter grew up in Fulton and resides on the west side of the city on the Oswego River. His home is complete with a pontoon boat, kayaks and a pool.

In the winter, the family enjoys downhill skiing.

“If you follow me around with a GoPro camera on, it wouldn’t be any super exciting life. It would be a lot of family stuff,” he said.

“The way we spaced our kids out, we are going to have a child in the Fulton City School District for 22 consecutive years, then we can retire,” he said.