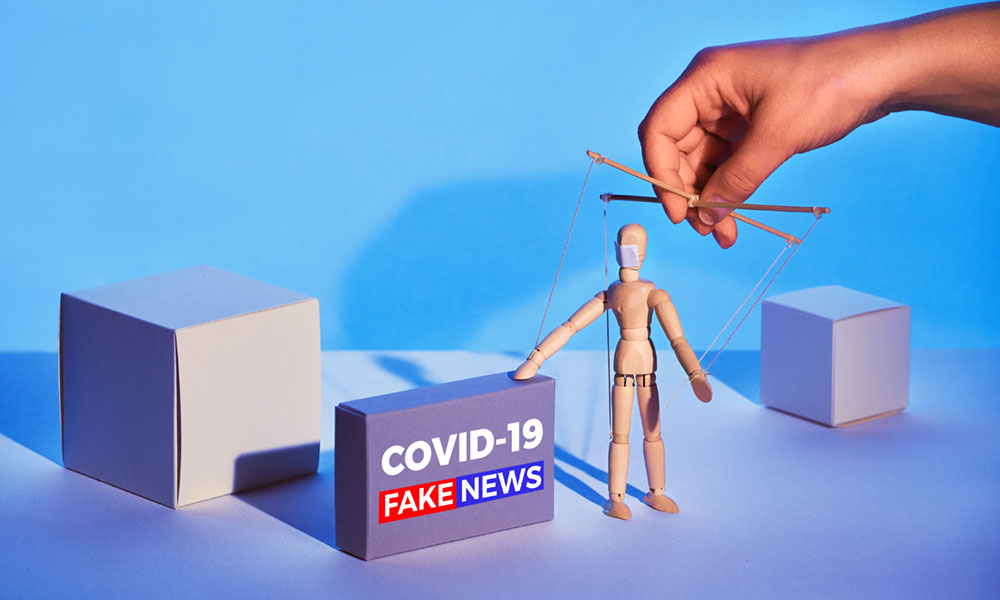 ‘We are living in a new political world and, for better or worse, the old rules no longer apply. That’s why we need to be vigilant about what we see, hear and read’

You probably have heard the story about the 32-year-old father of two from Salisbury, North Carolina, who in 2016 read that a pizza restaurant in Washington, D.C., was harboring young children as sex slaves as part of a child-abuse ring led by former Democratic presidential candidate Hillary Clinton and her chief campaign aide, John Podesta.

Maybe you reacted as I did: How could anyone with half a brain believe such nonsense?

Looking into this further, we would have found that the articles making these claims were showing up relentlessly on the internet on sites including Twitter, Facebook and Instagram as part of thousands of fake stories during and after the contentious 2016 presidential campaign.

The same thing happened in 2020 during the midst of another presidential campaign, but this time many of these social media platforms became more aggressive in blocking or taking down these posts and websites.

Going back to the pizza shop episode, Edgar Welch found these stories believable and drove six hours to the Comet Ping Pong pizza shop to check it out. Shortly after his arrival, he fired an assault-type AR-15 rifle. Thank goodness, no one was hurt.

Welch told police he came armed to help rescue children, but he gave up peacefully after satisfying himself that what he had read was not accurate.

Fake news articles — especially throughout 2016 and again this recently completed election season — became a fixture on social media. They were designed to deceive, and they depended on wide circulation from believers who shared these false posts. Almost all of us have done this at one time or another, unwittingly becoming a pawn in a cat-and-mouse game of manipulation.

This “fake news,” a term that has been popularized by President Donald Trump, is nothing new. We still see lurid headlines on the front pages of supermarket tabloids, although they are not as pervasive as they were a generation ago, because the internet has become the weapon of choice for the nefarious to spread their gospel of lies, innuendo and misdirection.

Although Twitter and Google began flagging some articles in 2020, challenging their factualness (even those of the President), Facebook and some other platforms are less likely to provide enough oversight to identify all bogus posts. This is some of the fallout in a society such as ours that treasures free speech.

“Identifying the `truth’ is complicated,” wrote Mark Zuckerberg, founder and CEO of Facebook. “While some hoaxes can be completely debunked, a greater amount of content, including from mainstream sources, often gets the basic idea right but some details wrong.” Zuckerberg said he believes sites such as his must be extremely cautious about becoming arbiters of truth.

When push comes to shove, the bottom line falls upon us, the readers, viewers and listeners to sort through what is factual and what is not. It’s human nature to embrace a viewpoint that strongly mirrors our own, but is it true? If we pass along a fake story to friends without considering the consequences, we become complicit in this problem. If this happens often enough with a bogus story, it takes on credibility and a life of its own.

“The reason why it’s so hard to stop fake news is that the facts don’t change people’s minds,” said Leslie Harris, a former president of the Center for Democracy & Technology, a nonprofit that promotes free speech and open internet policies.

In the 2016 election Marco Chacon made up a story about Clinton calling Bernie Sanders’ supporters “a bucket of losers.” It came from a fake story he had posted on his website saying that Clinton made the remark at a secret speech she had given inside a Goldman Sachs boardroom.

Once posted, the story quickly went viral and was even picked up by Fox News and given wide coverage. Fox later issued an apology after finding that the whole thing was a hoax.

The story took on the presumability of accuracy after Clinton had called half of Trump supporters “a basket of deplorables.”

There are some tips that have been developed to spot “fake news.”

• Who published the article? Unfamiliar websites should raise red flags about its trustworthiness and prompt a search to verify its authenticity.

• Who wrote the article? Is it a legitimate journalist or is it someone who has an ax to grind or maybe even a paid political operative for a major party or organization?

Think about the consequences of sharing a sensational story, said The Huffington Post. “Fake news sites rely on readers to share and engage with their articles in order for them to spread. In extreme cases, these fake articles can balloon out of control and have unintended consequences for those involved in the stories,” the news site said.

Although the article about the pizza shop incident mentioned at the beginning of this column occurred about four years ago, the business owner and the employees still get death threats and online harassment. The false claims have been debunked scores of times.

Why are so many online readers so easily duped?

I maintain that “complexity” is one of the public’s biggest challenges in finding the truth. It is much easier for someone to weigh in on the latest controversy involving the Kardashians compared to an issue such as COVID-19, climate change or nuclear energy. That is why too many consumers are willing to have someone form opinions for them on complex topics rather than research the pros and cons for themselves.

It reminds me of a segment on The Daily Show with Trevor Noah when one of his correspondents went to a Trump rally after the Mueller Report was released. Trump had proclaimed total vindication, which, of course, was far from the truth.

Trump kept tweeting and saying, “Read the report,” a statement picked up by his supporters. In The Daily Show segment, the correspondent asked about a dozen Trump supporters who had recommended reading the report whether they had read it. Every one of them said “no,” yet here they were parroting the words of the President but not following their own advice.

In his book “Humbuggery and Manipulation,” F.G. Bailey says that no leader can survive as a leader without deceiving others. He claims they put politics before statesmanship and are not the virtuous people they claim to be. “They distort facts, oversimplify issues, promise what no one can deliver, and they are liars,” Bailey said. In addition, the leader’s followers blindly follow and spread, even amplify, the misinformation.

Middle Ages Italian philosopher Niccolo Machiavelli, who proposed the theory that power is at the heart of all politics, believed that private moral virtues were inappropriate and ineffective for public political life and that a leader need only pretend to possess these ethical qualities.

French diplomat and dramatist Jean Giraudoux once said, in essence, that “the secret of success is sincerity. Once you can fake that, you’ve got it made.”

We are living in a new political world and, for better or worse, the old rules no longer apply. That’s why we need to be vigilant about what we see, hear and read, and, on top of that, be scrupulous about what we share with relatives, friends, neighbors or other so-called “true believers.”

Where Have All the Local Musicians Gone?