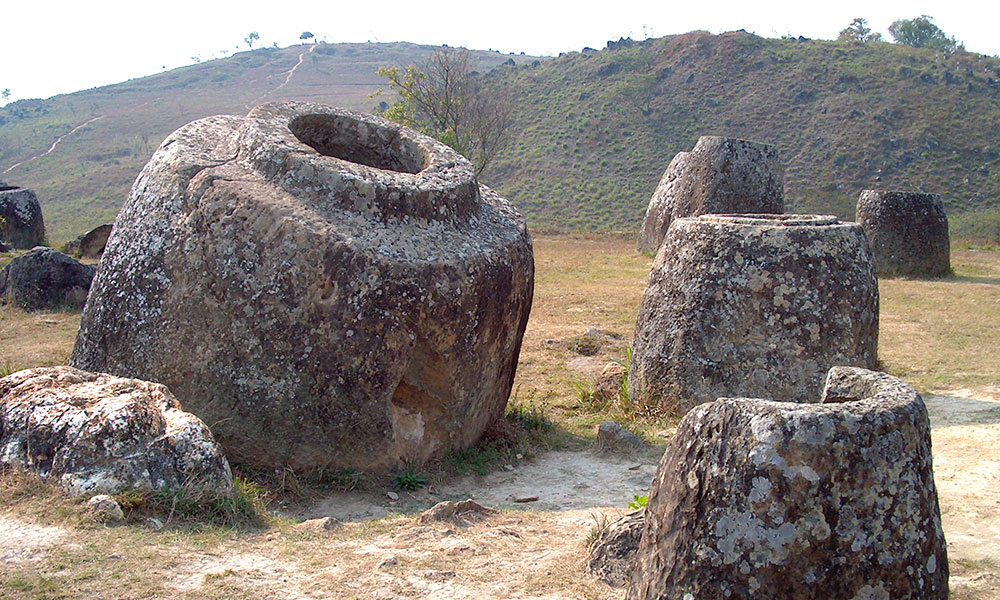 Plain of Jars: Thousands of jars scattered across the plain some weighing 14 tons. Their origin is still open to speculations.

Laos is not the first country that comes to mind when planning a trip to Southeast Asia but it should be considered.

Laos is one of few remaining communist countries in the world, which means that it has not been overtaken by commercialism.

You won’t find McDonald’s or KFC, a fact that adds to the charm of the country.

The food is fresh and often organic because fertilizers and pesticides are too expensive. They say they don’t need fast food places because most of their food is “fast food,” quick and easy to prepare.

Laos’s capital and largest city, Vientiane, is located on the Mekong River. The city is much more sedate than other capital cities in Southeast Asia.

In 1954 the Lao achieved independence from France but the French influence is still seen in the buildings, cafes and some signage.

One of the interesting sites is the Victory Gate (Patuxai) modeled after the Arc de Triomphe in Paris. It was built to honor the Laotian soldiers who died in WWII and the war for independence. It was built with money given to Laos by the United States to build a runway and sometime called “the vertical runway.”

Also impressive is the Pha That Luang, a gold-leafed stupa that was originally built in the third century. The Hindu temple contains a relic of Lord Buddha’s breastbone. There are other buildings in the complex, including a statue of King Setthathirat, who made Vientiane the capital in 1560.

For local handicrafts and to try some local food visit one of the night markets. Pashmina articles, a fine variant of spun cashmere, are relatively inexpensive.

The landlocked country is mountainous and most of the people live in rural areas growing mainly rice as they have for generations. The countryside is one of the charms of Laos and a favorite with backpackers. Backpackers should have a guide. Travelers who are not on a scheduled tour should consider hiring a car and driver to take them to the places they would like to visit. One of the most relaxing and upscale ways to visit Laos is on the Mekong Explorer cruise.

Not far north of Vientiane is a lovely area with limestone mountains and caves. Nearby there are 16th- and 17th- century monasteries. It is a must visit for those who do not have enough time to explore the country outside of the capital city.

In the north of Laos is Luang Prabang the ancient capital of Laos. It is located in a picturesque valley along the Mekong. There are several beautiful places to visit, including Wat Xieng Thong, one of the most important Buddhist monasteries. Have lunch along the Mekong and visit the waterfalls just outside the city.

One of the most enigmatic places in Laos is Plain of Jars. The archeological site is located near the village of Phonsavan. There are thousands of jars scattered across the plain, some weighing 14 tons. The origin of the jars is still open to speculations. Some people believe they were funeral urns, others for storing water or food. Most believe they are about 2,000 years old and the local legend has it that an ancient king of giants created them to brew large amounts of rice wine to celebrate a victorious battle. The area was traversed by the Ho Chi Minh Trail and heavily bombed during the Vietnam War. There is still evidence of bomb craters and unexploded mines but the dangerous areas are clearly marked. Locals say their largest resource is the metal from the bombs which they have used to make shovels, fences, and other things.

Americans need a visa which is available on arrival at certain points of entry. E-visas are also available. U.S. dollars and Thai baht are widely accepted. Credit cards can be used in tourist areas but it is best to have some Laotian Kip, which can be obtained at an ATM.

The Year that Was and Wasn’t on The Pandemic Rollercoaster

Randomness of Life: There But for the Grace of God Go I