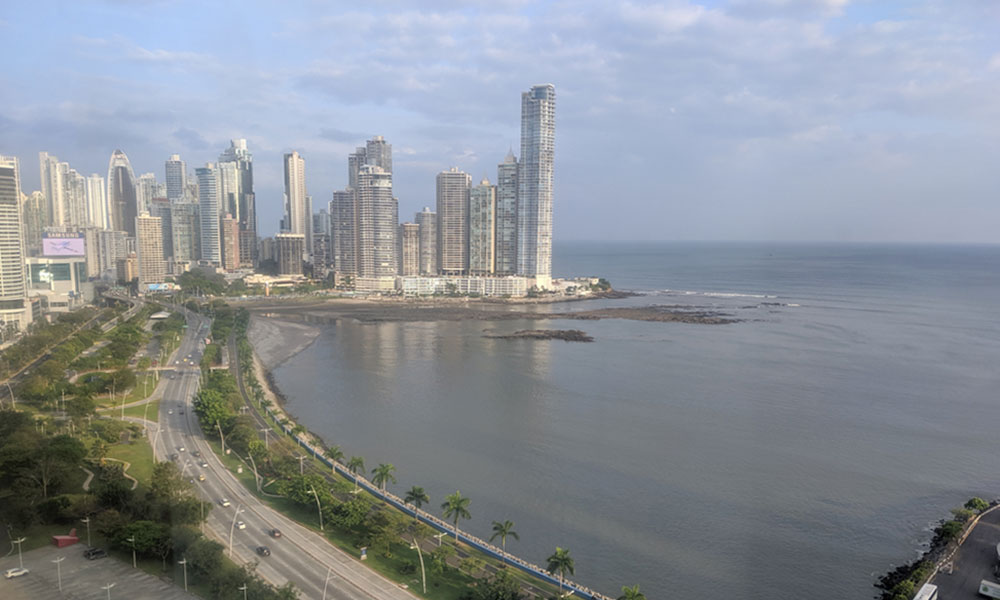 Panama City is the “New York City” of Central America. It has become a skyscraper city. It is the oldest continuously occupied European settlement on the Pacific Coast of the Americas.

There are three distinct parts to Panama City.  One is a World Heritage site called Panama Viejo (old city) founded in 16th century.  The area includes a museum and some ruins. The city was destroyed in 1671 when it was attacked by Henry Morgan and his band of pirates. The “new” city was built in 1673 and is also a World Heritage site. It is referred to as Old Town or Casco Viejo because a wall was built around most of it.  Old Town is in the process of rejuvenation and has become a major tourist attraction.  The twin-towered Cathedral on the central plaza is also undergoing renovation.  There are places to stay, shop, and dine.  This is a great place to wander around to soak up the ambiance of Panama. Modern day Panama City is a bustling city of skyscrapers that are home to banks, businesses, hotels, and restaurants.

While exploring the various aspects of Panama City, a must-see and one of the most popular tours is the Panama Canal. The canal is an architectural wonder. In 1513, the Spanish explorer Vasco de Balboa crossed the Isthmus of Panama becoming the first European to reach the Pacific Ocean from the Atlantic Ocean.

Thus began a dream to create a water route that would provide quick, easy access between the two great oceans.

The first attempt was by a French company that failed mainly due to the high cost in both money and lives. The United States ended up building the canal which opened in 1914. In 1999 the control of the Panama Canal Zone was transferred to Panama. There is a museum in Old Town devoted to the construction of the canal, although many prefer to visit the Mirafloras Visitor Center located on the canal lock where displays provide the history of the canal and the canal’s operation. Visitors can also watch ships transiting.

The best way to experience the canal is on tourist boat. Most tours are for a half transit and include a meal. A full transit takes eight to 10 hours. Ships transiting the canal pay a high price. Princess Cruise Line pays about $425,000 plus $35,000 so they can have a specific time to transit instead of waiting in line.

Other day trips include a visit to Taboga Island, known as the “Island of Flowers” where there are a variety of activities, including swimming and hiking. Nature lovers will want to visit the Gamboa Rainforest, where there is an aerial tram, a sloth sanctuary and butterfly gardens along with many ecological exhibits. Interested in culture? Then take a dugout canoe adventure to the Embera Village. The Embera are the indigenous people of Panama and Colombia. Visitors can listen to music and watch dances that have changed little since the days before the explorers.

There are several interesting museums but architecturally nothing as eye-catching as the unique Biomuseo. It is the place to learn about the geological origin of the Panamanian isthmus and the impact of the planet’s biodiversity. The museum has many interactive displays to keep visitors engaged.

From Panama City there are excellent connections to hot spots such as Boca del Tora, beautiful beaches, and fascinating islands. Panama is a great place to take Spanish language or cooking classes.

For Americans to visit Panama a passport valid for three months is all that is necessary. While Spanish is the national language English is widely spoken. The Panamanian money and the U.S. dollar are interchangeable but large U.S. bills such and 50s and 100s are sometimes difficult to use as they are often thought to be counterfeit.

What Are You Planning to Do to Celebrate the Holidays?