Part of Northern Mariana Islands and near Guam, tiny island has historical connections with the U.S 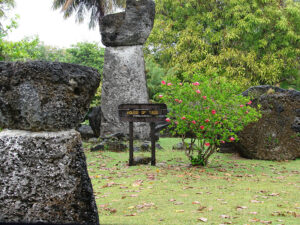 Most people know that the United States ended the war with Japan by dropping an atomic bomb on Hiroshima.

Some may know that the bomb was delivered by the Enola Gay piloted by Paul Tibbets, Jr. on Aug. 6, 1945.

Some may even know that the plane took off from North Field on Tinian Island.

However, very few are able to locate Tinian Island or the Northern Mariana Islands on a map.

In 1945 about 75,000 men lived on Tinian building coral runways that enable thousands of B-29s to take off on bombing missions, making Tinian the busiest airport in the world at that time. Today about 3,000 people live on the small island.

North Field, even though it is on the National Register of Historic Places in the Northern Marianas, is a quiet place with weeds growing up in and around the few remnants of the days when it was a buzz with activity.

Nowadays the island is basically a tourist destination for beach bums, dive fanatics, and history buffs.

The island is accessed from the neighboring island of Saipan, the capital of the Northern Marianas. The two islands are so close it takes longer for the plane to taxi for takeoff than the duration of the flight.

There is a car rental, a hotel and a casino on the island. The island can be toured in one day. Besides the WW II sites in North Field, some may want to visit the memorial at Suicide Cliff, where hundreds of Japanese citizens and soldiers ended their lives after realizing that Japan was losing the war. They believed the horror stories they were told about what would happen to them if they were captured or surrendered, so they jumped to their death — including women and children.

Most of the people in the Northern Mariana are Chamorro, a civilization that dates back 5,000 years. Early Chamorro people used latte stones, also called Taga stones, 15 feet tall, as a foundation for their buildings. Latte stones are megalithic rock pillars topped with hemispherical capstone.

Today there are remnants of a Taga House on Tinian. Only one of the original 12 latte stones remains. Legend has it that the house was built around 1500 BC by a Chamorro chief, Taga, who had superhuman strength capable of picking up the stones and placing them into position himself. According to the legend, when the last latte stone falls, Chief Taga will return to Tinian.

There are other things of interest on the island. In the first half of the 1900s, Tinian was an agricultural producer for a Japanese sugar and rum company, and evidence of Japanese habitation is visible in the Shinto shrines, cannons and ruins dotted around the island’s jungles and caves. The most spectacular natural phenomenon is the Blowhole, where columns of water shoot 10 meters in the air.

Other than sites of interest to history buffs, scuba diving is the primary reason visitors come to Tinian because of the numerous reefs, wrecks and caves lying under the waters surrounding the island. Favorite spots include Dump Cove, where planes, tanks, ammunition and Jeeps from World War II were dumped.

Because it is a commonwealth of the United States, visitors only need a passport; US dollars are the official currency; ATMs are easily located. To feel like a Chamorro, greet people by saying, “Afai Dai.”

Locals like to say that the islands are a great place to live because they only work “halfa day.”

‘You Can’t Handle the Truth!’