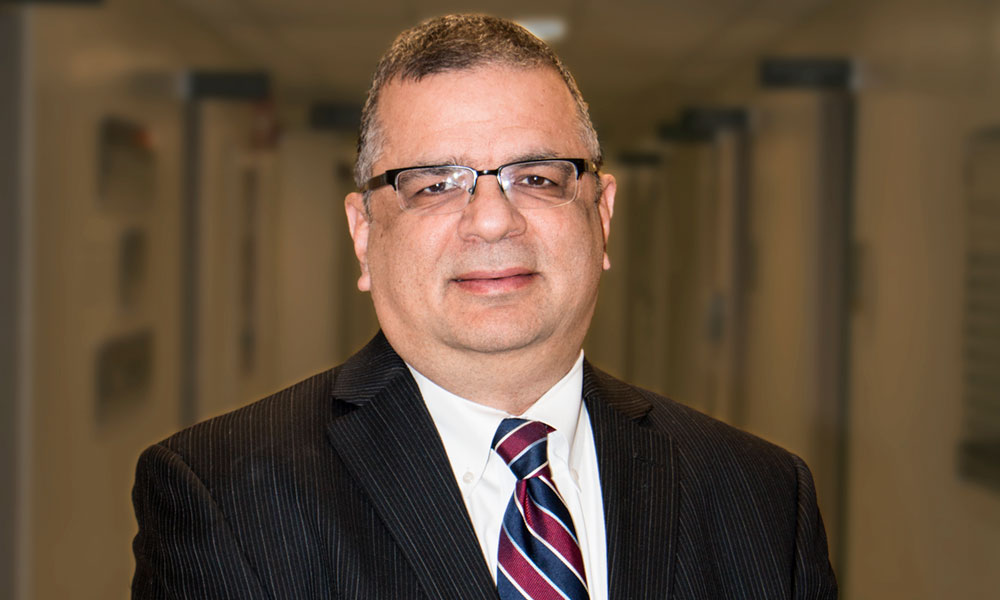 Healthcare has undergone quite an overhaul from even a decade ago. Physician Joseph W. Spinale, chief medical officer for St. Joseph’s Health since 2017, has observed this change both at Kent Hospital in Warwick, Rhode Island, where he used to work, and at St. Joseph’s.

“Hospitals used to be places where physicians and single practices and small groups came and practiced their work,” Spinale said. “Now, it’s a complex system or is part of a larger complex system. It needs to provide healthcare for the population it serves. Physicians who used to be their own entities are transitioning to be employed. It’s a lot of work to shepherd those things. It’s no longer doctors doing their own things, but doctors being part of a whole. They were trained to be autonomous, so it’s difficult. How do I train them to be autonomous in a larger system and collaborative?”

Spinale worked in his family’s engineering firm, which designed and built assembly lines. Though healthcare is much more personal and caring than a factory assembly line, the experience taught him important lessons.

“That work made me very focused on process,” Spinale said. “How do you design a process, remove unnecessary steps from the process and get a good product at the end? As we apply that to the in-patient healthcare setting, when you get a good result, it’s very rewarding.”

Spinale earned his Doctor of Osteopathic Medicine from Ohio University in Athens, Ohio, and his Master of Business Administration from University of Massachusetts Amherst in Amherst, Massachusetts. He is board-certified in cardiovascular medicine.

‘How do we provide the best care for a population of people at the lowest cost?’

“I never had a plan to come to New York,” Spinale said. “In my old role, I was in the succession plan to be the president of the hospital.”

That changed with a call from a recruiter who felt that Spinale would be ideal for the chief medical officer position at St. Joseph’s.

“I said, ‘Isn’t that the snow capital of the U.S?’” Spinale said. “’Call me back when you have something in North Carolina or Virginia.’”

In July, Spinale visited and felt like St. Joseph’s was the place for him. By Labor Day, he called Syracuse his home.

“It’s a great hospital and great community,” Spinale said. “We love Syracuse and Central New York and we’ve been here ever since.”

First thing in the morning, he meets with the physicians to prepare for the day. He also meets with the hospital directors and managers to catch up with what’s happened over the previous 24 hours and what is expected for the following 24 hours.

He also walks through the hospital to visit each department to talk with employees about what barriers they may have to overcome to provide excellent care and to learn about any other issues.

He also speaks with other leaders in the hospital about the information he’s gathered in the morning.

During the afternoon, he interviews employment candidates, meets with various departments and quality improvement groups, and to wrap up his day, he meets with the physicians again to recap the day. Spinale also works with physicians leaving small medical practice seeking employment.

“There’s a lot of financial assessment and due diligence,” Spinale said. “Mixed in with that is the usual budgeting and quality improvement work.”

He also works to ensure that the students have a good learning experience that meets accreditation standards and that students, employees and interns are working safely. St. Joseph’s is certified by DNV GL, an international accredited registrar and classification organization headquartered in Hovik, Norway.

Spinale works with the St. Joseph’s Medical Group, which is affiliated with the Trinity Health System, and interfaces with his counterparts at Crouse and Upstate.

“All of us chief medical officers and hospital administrators have good, working relationships,” Spinale said. “It’s about collaborating and competing, because every hospital has a bottom line they must meet.”

Spinale said that his biggest challenge is daily answering the question, “How do we provide the best care for a population of people at the lowest cost?”

One of St. Joseph’s recently achieved goals is reducing the rate of hospital-acquired infections, which enabled the hospital to earn a Leapfrog A in its safety score.

“It’s one of my pet peeves for a patient to come to the hospital and be harmed by the hospital,” Spinale said.

St. Joseph’s also has a community health and wellbeing department that promotes health initiatives in the community such as smoking cessation, diabetes management and healthful diet.

“As we move from taking care of individual patients, to keeping the community healthy, that’s where the savings is in healthcare,” Spinale said. “It’s been a pleasure working in a faith-based organization. It’s very different than working for a for-profit and a secular hospital. In this institution, the commitment to taking care of the community and each other is palatable. It hits you at the front door. It was completely obvious from the day I came. It’s why I’m here.”