Could women bolster the manufacturing sector?

The U.S. Department of Commerce estimates that American manufacturers will face a shortage of 2.4 million workers by 2028.

Because of this employment shortfall, they could lose nearly half a trillion dollars in lost GDP.

According to The Manufacturing Institute, a think tank based in Washington, D.C., women account for less than one in three workers in the manufacturing industry, despite representing about half of the overall workforce. The lower percent of women in manufacturing has remained stable since 1970.

Locally, those statistics play out similarly. The NYS Department of Labor stated that in the Syracuse metro area, women comprise 27% of the manufacturing workforce and 49% of all the civilian workforce, both those working and those unemployed but looking for work.

The NYSDOL further stated that the manufacturing sector has added 400 jobs over the year ending in March 2022 in the Syracuse metro area.

As a growing industry, manufacturers must promote these opportunities among women. While COVID-19 has affected the workforce recently, longer term trends have been affecting manufacturing, including the vacancies left by retiring baby boomers. The NYSDOL estimates that 30% of the manufacturing workers in the Syracuse metro area are 55 and older. In a decade’s time, all of those workers will likely have retired. The time to heavily recruit is now.

Public perception is part of the problem. Many people — women included — believe that manufacturing jobs are low-skill, dirty, knuckle-scraping, dead-end positions where workers use dangerous equipment.

The factory jobs of a generation ago focused on heavy equipment and tools stereotypically wielded by men then. In the past 20 years, however, many of these jobs have become highly skilled, computer controlled and precision oriented. That is why the public’s view of manufacturing as an industry has become so important to organizations.

“The New York State Department of Labor actively tries to educate more women, jobs seekers and job changers about the many opportunities in the manufacturing field,” read a statement from the Department of Labor’s media relations office. “It is important for women to see themselves in these roles, something we do regularly as part of our ‘This Is Why’ campaign.”

The campaign includes videos on social media that showcase a variety of individuals — including women — in manufacturing roles. “This Is Why” also demonstrates the high-tech, precision nature of many modern manufacturing jobs. The videos also share that depending upon their company, workers in manufacturing may receive employer-funded scholarships that can help them pursue education to earn a higher income job in the industry.

In one “This Is Why” video, Shannette, a worker with Data Device Corp. in Bohemia, New York, proudly spoke about how the parts she helped make in advanced manufacturing will go to NASA and eventually go to space. Others will go in Boeing’s airplanes.

Previously, Shannette had worked as a part-time retail worker and part-time babysitter, typically dead-end jobs with low pay and requiring a few basic skills. Her video features footage of several other women in a clean area using microscopes, handling computer motherboards, soldering, and handing precision equipment — all positive images of how far manufacturing has come. This kind of industry promotion also helps provide context and meaning to workers in manufacturing, underscoring how much manufacturing work matters.

The NYSDOL also hosts job and career fairs and encourages employers to offer mentorships, internships, job shadowing and registered apprenticeship programs, in part to engage women with the manufacturing industry. These points of engagement help women learn more about the industry, and realize that they can gain skills they need to succeed in skilled manufacturing.

New York’s registered apprenticeship program allows unskilled workers 18 and older to earn an education at no cost to them. In fact, they receive competitive pay while learning through on-the-job training. The program also includes classroom time. At the end of the apprenticeship, successful students receive a certification that qualifies them to work at a more advanced level and receive a higher wage. They are not required to work at the company where they received their apprenticeship, but many do. 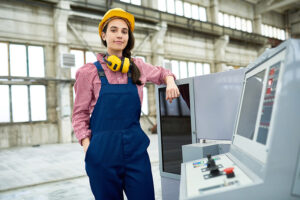 As with manufacturing work itself, the apprenticeship program seems to suffer from a public perception problem. While it used to include a limited cadre of a few typically male-dominated industries like pipe fitters, plumbers and brick layers, the variety of apprenticeships involving skilled manufacturing include central sterile processing technician, CNC sawyer, CNC tool and cutter grinder, mold maker, plant maintenance, quality assurance auditor, and toolmaker, among others. By fast tracking new hires to more advanced levels and not requiring completing a paid tuition style of education to get there, the apprenticeship program opens skilled manufacturing (and many other industries) to people of all economic levels.

Chandra Marshall, vice president and general manager of the Syracuse site of Lockheed Martin, believes that mentoring and education represent driving factors in drawing women to manufacturing as a career.

“We recognize that if we don’t nurture our own talent, they won’t be here long,” Marshall said. “Investment in our teams, whether through our formal mentorship program, apprenticeships, continuing education, training and leadership programs–it is a given here.”

She wants the industry to engage with females at younger ages so they realize that manufacturing may be an option they want.

“We should be doing more at the early years: elementary school, middle school and especially high school levels,” Marshall said. “The more we can demonstrate the importance of manufacturing in our economy and how there’s a place for all women, we can continue to grow the interest, and therefore industry.”

Sometimes, communication makes a difference in attracting people to manufacturing as a career.

“Producers and engineers are not renowned communicators, so we tend let outsiders describe manufacturing to outsiders,” said Laura Miller, general manager at Darco Manufacturing in Syracuse. “This leads to confusion. One does not need to be a STEM expert to cross into a mythical land of ‘advanced’ manufacturing.’ Nor does one need to be a weightlifter. We need to better describe what we do, how many different roles there are, what it takes to start and what it takes to improve and move up. We need to talk about money and how an individual’s attributes can be seen and deployed in medium enterprise. If we can communicate better, we’ll be able to attract more women.”

The remuneration in manufacturing has increased in recent years. According to the NYSDOL, the average weekly wage in manufacturing in the Syracuse metro area is $1,389, which is more than $72,000 annually.

While the shortage in manufacturing workers will likely remain a problem for a while, manufacturers could expand their workforce by following the lead of the NYSDOL and actively recruit women.

Learning what today’s manufacturing industry is like would go a long way toward generating interest in working in it.

In addition to expanding recruitment to target women, manufacturers should also look at internal policies, particularly those involving maternal leave and caregiving of older adults (which usually falls to women) and sexual harassment. They should also ensure that the health benefit plan include plenty of services women need. Providing lactation areas and appropriate corresponding policies would also help women feel that they belong. By ensuring the manufacturing environment both seeks and welcomes women, more women are likely to become interested in working in manufacturing.