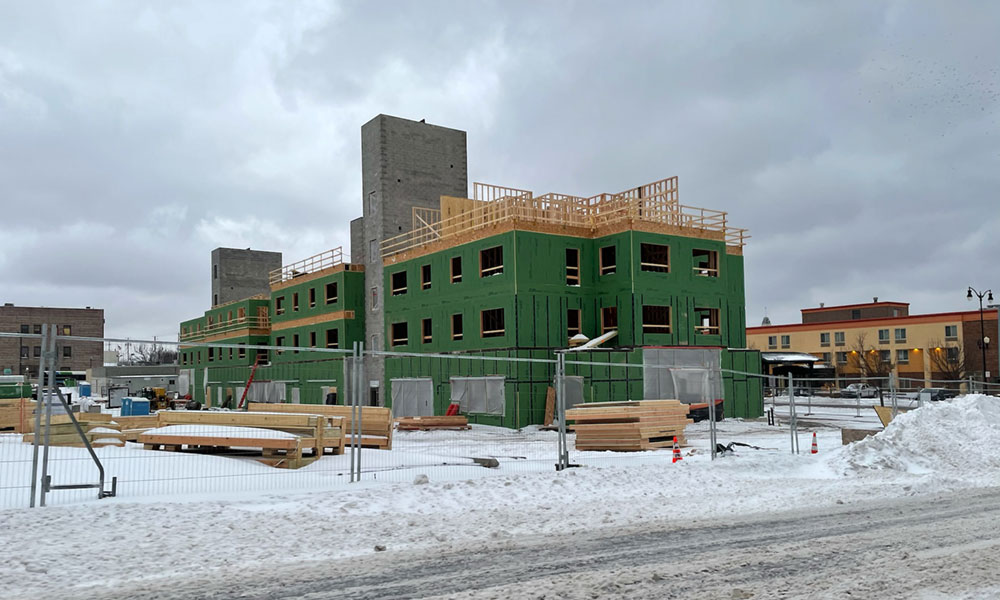 Construction of the Midtown Plaza on the east side of Oswego: 75,000 square-foot mixed-use building being built by Rochester-based Home Leasing, LLC.

Like any business, the city of Oswego had to hunker down and battle to control finances in anticipation of the inevitable chaos created by COVID-19.

For city of Oswego Mayor William J. Barlow, it has taken hard work since the onset of the pandemic last March for his team to effectively deal with the negative implications.

“From offering a retirement buyout back in mid-summer to reducing upcoming salary expenses, reducing city-wide overtime and other cost-saving measures, we were able to hold the line on the 2021 city budget by preventing a property tax increase,” he said.

In response to the health threat, the city transitioned to telework, funded its preparation and response to the pandemic in the form of several small business initiatives, and tested its essential employees for the virus weekly all while providing personal protective equipment.

“We’ve tried to not let the pandemic impact our plans and progress,” he said. “While it certainly has had an impact on all of our daily lives, a big focus of my time throughout 2020 was dealing with the response to the pandemic but also keeping our large-scale projects on track.”

Those large-scale projects have been running concurrently ever since the city was awarded $10 million in Downtown Revitalization Initiative funding in 2016. Barlow effectively leveraged the funds with private investment, which yielded a wave of positive economic development projects throughout the city.

The demolition process of the Midtown Plaza on the east side of downtown Oswego started last June.

The plaza, built in 1965, was razed to accommodate a five-story, 75,000 square-foot mixed-use building being built by Rochester-based Home Leasing, LLC.

The new building facing East First Street will house 70 residential apartment units, 46 one-bedroom and 24 two-bedroom, along with 3,300 square feet of commercial space on the ground level.

The city has been going through a renaissance of sorts. Major economic development projects downtown include the Litatro building, Riverwalk/22 Crossroads, and Harborview Square, all promising additions to the local retail and housing sectors.

In addition, recent renovations at Oswego City Hall preserve a vital historic resource in the county.

“Our eyes are already on maintaining the momentum beyond the initial construction of these developments,” Barlow said. “We’re already experiencing some spill-over investment by existing businesses or, in some cases, new businesses throughout downtown and I expect that to continue.”

The mayor said once the projects are completed and COVID-19 passes, outdoor programming and community events will be incorporated. He said these measures will showcase the new developments and target potential downtown residents the buildings are expecting to attract.

“Above all, there are still some important, privately owned key buildings downtown that still need attention, like Old City Hall, Ferris Wheel, 1850 House and others,” Barlow said. “We’ll focus on trying to get some work and improvements done to these buildings to get them back into productive use to complete our entire downtown.”

All along the waterfront

One of Barlow’s focal points this year will be an overhaul of the city’s waterfront.

The city has been allotted more than $16 million from the state Lake Ontario Resiliency and Economic Development Initiative and the Federal Emergency Management Agency for repairs and renovations to Wright’s Landing, Breitbeck Park infrastructure improvements and a makeover of the International Pier.

The state directed $6.1 million in REDI funding to buoy the project, which resulted in the marina becoming more flood-resistant and pedestrian-friendly.

The marina area has been lifted three feet to account for the new water levels from plan 2014 and will prevent future flooding from the high water levels in the future, the mayor added.

The International Joint Commission’s Plan 2014 is the roadmap for regulating Lake Ontario outflows that went into effect in 2017.

The city is also preparing to repurpose the International Pier. Late this spring, the city is expected to launch a $9 million project to upgrade the pier.

The project will result in space that is restricted for pedestrian use only, and will feature a boardwalk, public dock access, more seating areas and community space for events and various public activities.

The International Pier will become the Mayor William S. Cahill Jr. Pier after the late former mayor Bill Cahill. The project is anticipated to be complete in 2022.

“Between his work as mayor and his fishing business, his name and life is synonymous with the waterfront and this tribute is fitting,” Barlow said.

Work was also completed last year on 12 self-adjusting docks at the Port of Oswego Authority Marina that will also protect from future flood damage.

“People love the waterfront and, if utilized correctly, the waterfront can be a great asset,” Barlow said. “We’ll now have a premier marina with quality facilities for boaters to enjoy, and great public common areas and leisure activities in the marina for residents to enjoy from land.”

Also completed in 2020 was the city’s $56 million sewer separation project, designed to reduce the potential for sewer discharges into the Oswego River and Lake Ontario.

“While it was critically important to respond and deal with the pandemic, which we’re still doing, to me it was equally important to keep the city moving forward despite everything stacked up against us,” Barlow said.

Barlow recently announced a new housing program to encourage those who work in Oswego to live in the city.

The “Heroes as Neighbors” program will partner with Pathfinder Bank to cover closing costs associated with the sale of an Oswego home to frontline workers, first responders or active military members.

“Our mission has long been to capture the employees who work for our major employers in and around Oswego, like Oswego Health, Novelis, Exelon and SUNY Oswego, and to entice them to live here in Oswego rather than commuting to work,” he said.

The mayor said the “Heroes as Neighbors” program is an incentive for employees in the health care field to buy a home in Oswego.

“It is also a way to extend thanks to our local heroes who have worked so hard in high-risk situations since the beginning of COVID-19,” Barlow said.

The mayor said first-time homebuyers are often caught off guard by closing costs, and while wrestling with the life decision to buy, rent, move or stay put, those extra funds at the close of the transaction can be a tipping point.

“By partnering with Pathfinder Bank to eliminate the possible deterrent, we offer an extra incentive and make it all that much easier to purchase property right here in Oswego,” Barlow said.

Meanwhile, the city is engaged in developing a police re-imagining plan that is designed to bring law enforcement closer to the community, support the police department and its officers, and enhance the quality of life in the city.

As of late January, the plan was moving through the approval process before the Oswego Common Council.

Barlow said the council appointed a diverse committee, held an open public forum, conducted an extended public comment period, and is expected to move through a transparent and public approval process.

“Our plan supports our police department and officers and is structured around unifying law enforcement and the Oswego community,” the mayor said.

The plan mandates foot and bike patrols during the summer months, incorporates mental health counselors to co-respond to appropriate calls, calls for more investment in modern training programs, requires OPD to participate in more special initiatives like HOPE and Service to Aid Families, implements random quality assurance surveys throughout the department, and publicizes all policies and procedures.

“Our plan will bring law enforcement closer to the community to improve communication and build relationships, increasing the number of positive interactions between police and public,” Barlow said. “The plan ensures the safety of Oswego residents and is in touch with the real world situation on the ground in our community.”

CenterState CEO: There’s a Sense of Vibrancy in CNY