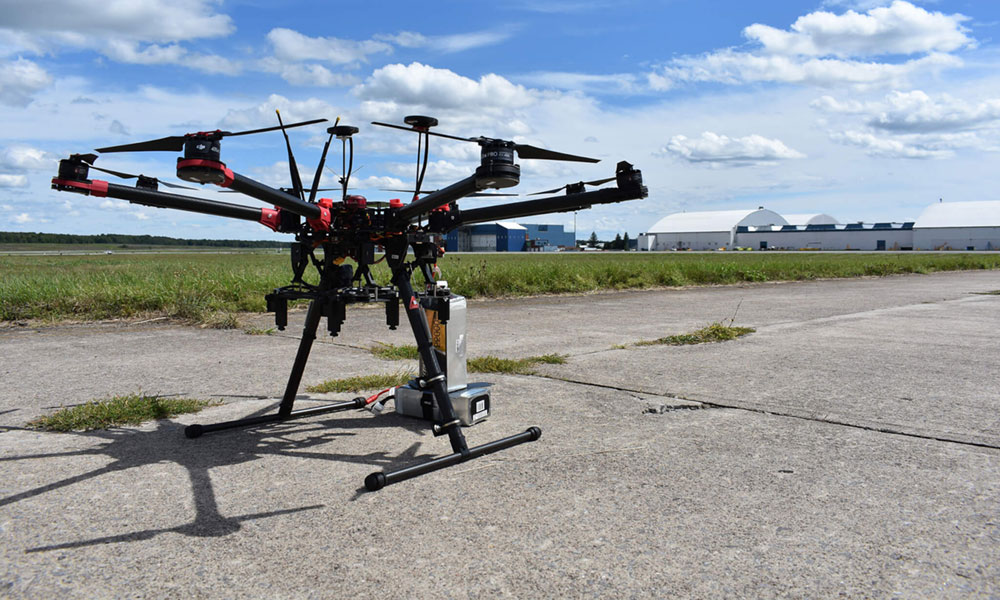 The unmanned aircraft industry in the region is primed for a big boost.

It is expected to generate significant economic growth in the region.

With its offices in Syracuse, NUAIR is responsible for managing the New York UAS test site, one of seven Federal Aviation Administration-designated UAS sites in the United States.

It maintains radar and technologies within the corridor, trains companies on how to scale up the use of drones and helps navigate these partners through the permitting and waiver processes with the FAA.

The technology and surveillance systems within the corridor provide companies with a safe environment to both test and deploy their commercial UAS operations in real, active airspace.

More than 3,300 UAS flights have been conducted within the corridor since 2015 as NUAIR continued to advance and build the needed infrastructure throughout the entire 50 miles. Gov. Andrew M. Cuomo announced the completion of the corridor in late 2019.

One such capability being conducted within the corridor involves extending the piloting capabilities of UAS. Current FAA regulations require drone pilots to operate their drones within visual line of sight. This makes scaling operations like package delivery difficult. NUAIR is developing an advanced UAS traffic management system within the 50-mile corridor that will make piloting UAS beyond visual line of sight a possibility while maintaining the highest level of safety in the national airspace, according to Stewart.

Recently, the corridor was the site where NUAIR; the COVID-19 Humanitarian UAS Response Partnership (CHURP); and CHURP’s drone provider, DroneUp, were able to test the delivery of COVID-19 test kits from Upstate University Hospital to its CNY Biotech Accelerator on East Fayette Street. According to local media reports, officials at Upstate and in the UAS community see great potential for drones in delivering time-sensitive materials in the future.

The test site and corridor provide the area with significant economic benefits, including high-paying tech jobs. It draws people to the area that are interested in flying unmanned aircraft and creates additional investment opportunities, Stewart noted.

Since its founding in 2014, NUAIR has conducted more than 3,300 advanced drone test flights.

“Our primary goal is to continue building jobs and opportunities in the area. Commercializing the corridor is a key element in unlocking the true potential use of drones, contributing to the further economic development of the Central New York and Mohawk Valley regions,” Stewart said.

Stewart is coming to NUAIR from Boston-based AiRXOS, which is part of GE Aviation. Throughout his tenure with AiRXOS, the company worked closely with NUAIR, so he is on familiar ground.

He said this is “a great opportunity to build on previous experience, bring those capabilities here and commercialize New York’s 50-mile corridor.”

These advanced drone operations require a high level of rigor, safety and thorough understanding of FAA standards and regulations, according to Stewart and Tim Lawton, NUAIR director of marketing and public relations.

“We help organizations expedite their path to advanced UAS operations,” said Stewart. “Companies invest time and money trying to implement drones into their daily operations. With our years of experience and knowledge of current regulations, we are here to help accelerate their return on that investment.”

Stewart compares unmanned aircraft system traffic management to a digital toll road, where people will pay to use these toll roads because it can get them to their destinations faster or more efficiently.

“If you can build a more cost-effective alternative for companies that deliver goods or health care to customers and patients, you’re going to be able to monetize those operations,” Stewart pointed out. “The 50-mile UAS corridor covers close to a half-million people between Onondaga and Oneida counties. Once we’re able to commercialize that, then you can expand that across a broader New York.”

Stewart said the integration of UAS into the national airspace will transform aviation traffic management.

Unmanned traffic management is based on digital sharing of each user’s planned flight details. Each user will then have the same situational awareness of airspace, unlike what happens in today’s air traffic control, he explained.

The evolution of advanced air mobility means instead of taking a cab, one might take an AAM transportation vehicle. While he believes AAM needs more time to come to fruition, he anticipates that it could be possible within the next six or seven years.

Until then, Stewart and the NUAIR team will continue their work in enhancing the unmanned aircraft industry in Central New York and advancing New York’s 50-mile UAS Traffic Management Corridor.

“Drones can be used to save time, money, resources and even lives. NUAIR has the knowledge, technology, and resources to help almost any business integrate drones into their daily operations,” he said.