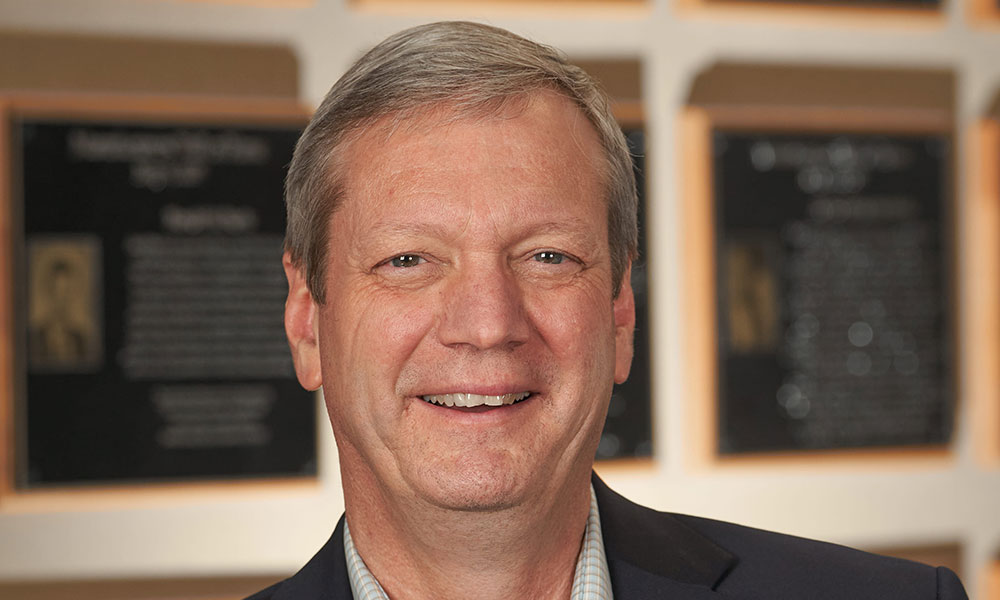 Growing up in West Point, a small farming community in northeast Nebraska, Randy Wolken could scarcely have imagined the career path that would make him one of the region’s chief advocates for the manufacturing industry.

Wolken has served as president of the Manufacturers Association of Central New York for two decades now. Under his leadership the organization has expanded its services and grown to include more than 300 businesses in 26 counties across Central and Upstate New York.

His journey to Central New York began in Nebraska, where his family raised cattle, pigs and chickens on a farm about 75 miles north of Omaha. Wolken was pondering his future after high school when a family friend encouraged him to apply to the U.S. Military Academy and the U.S. Naval Academy. He was accepted to both and chose to trade West Point, Nebraska for West Point, New York.

“It was just a fantastic opportunity for a small-town boy to go to West Point,” he says.

Wolken treasures his experiences there and still keeps in touch with many of his classmates. Mark Esper, the former secretary of defense, was one of Wolken’s roommates.

After graduating in 1986, Wolken became a military intelligence officer assigned to the 10th Mountain Division at Fort Drum. The division had only recently been reactivated and wasn’t fully formed. The expansion of Fort Drum then underway hadn’t initially included the airfield, so the division’s aviation elements were housed at Griffiss Air Force Base in Rome.

Wolken was assigned to be an intelligence officer for a cavalry squadron of scout helicopters and Humvees as well as for the aviation brigade. There was just one problem: they didn’t exist. They had to be built from the ground up. When Wolken reported to Griffiss, there were just five officers there.

“And we had to go build a unit with a couple hundred people and $200 million worth of equipment and get it combat-ready in a year,” he says. “So, I really had a chance to do things that a lot of 22-year-olds don’t get a chance to do.”

Wolken says the opportunity to help build an Army unit from scratch was a fascinating experience that taught him a great deal about management and organization.

Although he enjoyed the military, Wolken’s wife Denise was a pediatrician in the Syracuse area and the couple had fallen in love with Central New York. The prospect of continuously moving influenced his decision to leave the service.

After earning a master’s in public administration from Syracuse University in 1991, Wolken worked for 6 ½ years as a budget analyst for Onondaga County. He then spent 3 ½ years running the Samaritan Center, a Syracuse nonprofit that serves meals to those in need.

In 2001, Wolken considered a foray into politics when he unsuccessfully sought the Republican Party designation to run for mayor of Syracuse; he also sought the party’s support in 2005. Though he never made it as far at the primary, Wolken, who was 37, caught the eye of the head of MACNY at the time, who invited him to lunch. He convinced Wolken to apply to be the next head of MACNY. Wolken became president of the organization in 2001.

“It was a great opportunity,” he says. “I mean obviously I learned a lot very early.”

Quite a bit has changed since then. MACNY has grown from a mostly regional operation to an organization with statewide activities. Its staff has increased from 12 to 22 and the programs and initiatives designed to support manufacturing have grown.

The last year has underlined how much has changed. When Wolken arrived at MACNY they still used fax machines and snail mail. Before the pandemic they might have done 10 virtual programs all year. In 2020, MACNY hosted nearly 400 virtual events in support of the manufacturing industry.

After two decades at the helm of MACNY Wolken, 57, shows no signs of fading away. He and his wife still live in Syracuse; their three daughters are grown. Wolken has his hobbies—fly-fishing, spending time outdoors, watching SU games—but he says he enjoys his job too much to consider leaving anytime in the future.