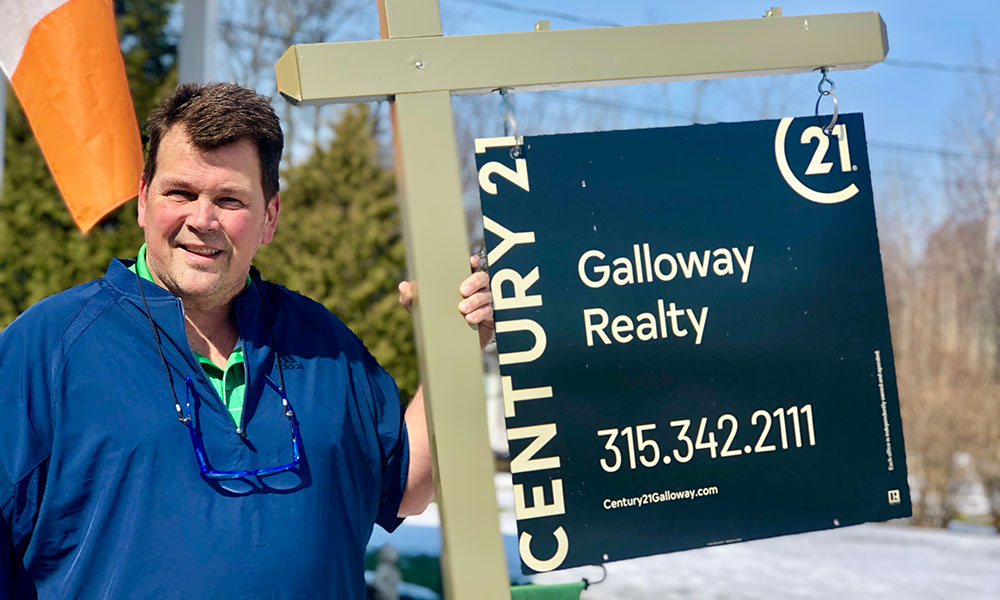 Last year, he ranked No. 2 in NYS with almost 100 transactions

For most people, COVID-19 has put their lives on hold, their activity slowed to almost nothing.

Ed Fayette, on the other hand, has been busy, very busy, all throughout the pandemic.

Fayette is a real estate agent with Century 21 Galloway Realty in Oswego. He is the top seller in the Oswego County area.

“I don’t think of it as pressure. I think of it as responsibility,” he said of his accomplishments. “I demand a lot of myself because I don’t want to let everyone else down.”

Fayette retired from the Oswego City School District in 2016, following a 33-year career.

“I’m not one to ‘retire,’” he said. “In anticipation of life after teaching, I dabbled in real estate.”

In 2004, in an effort to help his children get through college, he decided to venture into real estate, he explained.

“I started with Galloway in 2004 a little bit. Things really got going in 2005. It took a little while to get established. I’d be working afternoons and weekends showing homes,” he said. “Then after 2016, the sky’s the limit.”

A lot of people have asked him that since he’s doing so well in real estate, why didn’t he start earlier?

“I wouldn’t change anything in my life. I’m one of the fortunate people who enjoy their job. I enjoy what I’m doing; I enjoyed teaching,” he said. “I had wonderful staff and wonderful students. I have an excellent support system here now.”

His oldest former student is now 47, he segued, adding that they have been in contact on social media.

“Things have been going extremely well. My background has been a great asset for me in the real estate market. It’s been a huge benefit to have made all those contacts throughout the years teaching; all of the students and parents,” he said.

At the start of the pandemic, things were “just about at a standstill” from March through May.

“Then, in June, everything picked up. Nine days a week, 36 hours in a day wouldn’t have been enough,” he said. “From June through September, it was lights out!”

He had a buyer from the New York City area inquire about finding a home in Saratoga. Fayette worked out a referral, reaching an agreement with another agent, and found the person a home — “near the racetrack.”

“That worked out well, for everybody. I get a lot of folks from out of town, out of state, coming this way,” he said.

One buyer from Northern California was looking and checked out Central New York.

“He heard about Oswego and said it looked like a nice place and wanted to live here,” Fayette said. “There are a number of people looking to find a larger place to live. And some, the kids are all grown and moved out, that are looking to downsize.”

The Centurion Award is corporate-wide, he pointed out. It’s a fantastic acknowledgement, he added.

He credits his father’s advice for his success. His father told him, “Don’t worry about awards. Focus on what you’re doing and do it well.”

“That is why I am devoted to my buyers and sellers. It can be a confusing process,” he said. “I’ve won the Pinnacle Award four or five years now. It’s based on quality of service. Winning those two awards means you have a client satisfaction rate of 93% or 94% or more.”

He added that he is proud to have earned The President’s Award with Century 21.

“That’s really great,” he said. “Only a handful of people earn that.”

The top agent in Oswego County said he wants to continue to grow and not rest on his laurels.

“I’m a lucky guy. I have great family support. I have great colleagues and a great support system at Galloway. They let me do what I do — serve the buyers and sellers to the best of my ability.”

They send out a COVID-19 questionnaire and if the person answers ‘yes’ to any of the questions, they find an alternative way to show the home.

“I’m a real big believer in social media as a promotional tool. I’m in the office at least once a week or so to check on things. We’ve also done staff meetings on Zoom,” he said. “I have had a home office for 15 to 20 years now. So, I’ve done a lot of work there.”

His philosophy is not to treat people the way he’d want to be treated.

“I treat people the way I’d want someone to treat my mother,” he explained. “I treat everyone the way I’d like the people special to me to be treated. I always keep that in the back of my mind.”

“We are extremely proud of Ed and our entire office on what everyone accomplished in such a trying year and being part of this community,” said Elaine Galloway.

• Ranked 70th overall in the nation

Those two awards together qualified him for The President’s Award with Century 21. It’s one of the highest honors in the system.