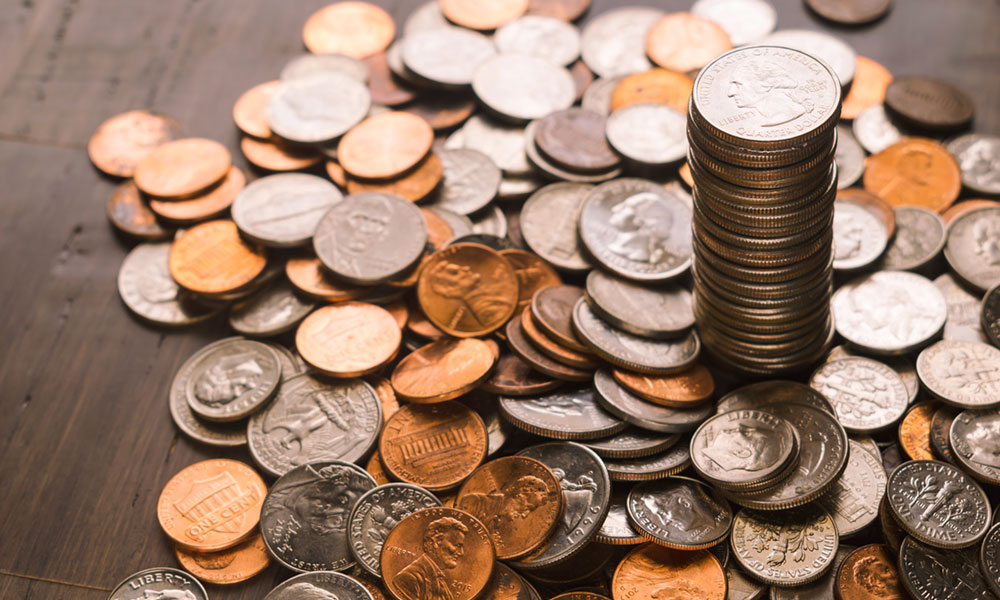 Cash shortage continues to be a a problem. Experts blame COVID-19

Have you been reaching for your credit or debit card more recently instead of cash?

Kenneth P. Walsleben, professor of entrepreneurial practice and entrepreneurship and emerging enterprises at Syracuse University, has seen the signs, too. After he had placed his order at one restaurant, he arrived at the register to learn that the restaurant had no change and that his total would be rounded up.

While Walsleben did not mind the slight increase in price — it was less than $1 — he did mind that the restaurant did not tell him until he was ready to pay.

“If you’re a merchant taking on a policy like that, you have to be straightforward and change the menu so everything ends in an even number,” he said.

For Walsleben the lack of change stems in part from people who have not redeemed their loose change jars at home since the pandemic began. Since few bank lobbies were open during the quarantine and even still, not all customers are comfortable going inside, customers’ change remains at home. Drive-thru tubes cannot accept change.

“That eliminates the biggest source of loose change: the individual,” Walsleben said. “You have a situation where this should loosen up now that banks have opened their lobbies and we can go get rid of our loose change. I don’t know if we can fix the problem fast enough. But I’m not sure that that’s why this should get so acute.”

Bill Prosser, professor of economics and business at Cayuga Community College, has also noticed the lack of change. He said that part of the problem may be that banks can’t get servicing for their coin machines during the shut-down and they’re backlogged.

“For health and sanitary conditions, businesses would prefer not to be handling cash and coins because they don’t want employees handling currency,” he added. “When the COVID guidelines first came out, we didn’t know how much contamination could be on coins. Now the evidence is suggesting there’s less risk there as COVID is airborne.”

The no-cash trend hurts small businesses, which generally prefer cash since they do not have to pay credit card fees for currency payments.

Prosser also said that the Federal Reserve and US Mint slowed down during the quarantine period but are back on track producing currency.

NBT Bank attributes the nationwide lack of change to “a substantial disruption of the supply chain caused by the COVID-19 pandemic,” stated Cat Manion, PR and social media manager. “Less change is being exchanged at our businesses and within our community as individuals alter their spending habits.”

All spring, most people spent from home using credit or debit cards, which means that few coins were spent. Manion also said that the US Mint temporarily decreased production earlier this year to protect employees.

“According to the Federal Reserve, the US Mint has been operating at full capacity again since mid-June.”

As a result, NBT Bank and other financial organizations have not been able to offer coins for business customers’ drawers for making change.

“Like many other disruptions that COVID-19 has caused, it is impossible for us to predict how long the shortage will last,” Manion stated, “however, the Federal Reserve has formed a task force to address issues causing low coin inventories, and to work on solutions to address the supply chain disruptions.”

Though the change shortage we have seen in the last several months should self-correct, it raises questions of whether America should go cashless.

Kenneth P. Walsleben, professor of Entrepreneurial Practice and Entrepreneurship and Emerging Enterprises at Syracuse University, sees both pros and cons to the notion.

“I don’t see it as being harmful to the economy,” he said. “I’m aware of people for a number of years who’ve said it’s not credible and gives too much information to banks about wealth. I’ve looked at it as someone’s pipedream. It’s an extremist view of what will happen but we’re getting closer to that.”

He also thinks that going cashless isn’t so much a decision that’s made but a trend that’s developing as more people use electronic means of spending, including the surge of online spending that’s increased because of the pandemic and will likely continue and also the general trend he’s observed for years, including automatic paycheck deposits and bill paying; purchasing with cards for convenience and safety; and online shopping.

He doesn’t see a cashless society happening, however.

“There are people who are blackballed by banks for bouncing checks,” he said. “How would they get by? For that reason, there always needs to be currency. It will cause people left out of the system to be at a disadvantage. A fair number of people don’t have access to banking.”

Some people like to use the “envelope system” of saving and budgeting promoted by financial guru Dave Ramsey, author of “The Total Money Makeover” book. People place in labeled envelopes the cash they have budgeted for certain expenditures by the month and when the cash is spent, they are done.

“I have a good friend who has the envelope method,” Walsleben said. “It helps them watch those pennies.”

Though he said about 90% of his spending goes through a card, he does not see how consumers could become completely cashless. How would they tip servers, bell hops or hotel housekeepers? What about concessions at fairs, festivals and sporting events? Going cashless would force these vendors to use card readers.

No cash also makes giving children allowance and teaching them about saving and spending much less tangible. What will happen to piggy banks, lemonade stands, birthday money and the tooth fairy? How would consumers privately sell goods and services through yard sales or working odd jobs?

“If that is our future, that merchants have to adjust to this and do it the right way,” Walsleben said. “Manage this as a policy in terms of the cost you charge at the restaurant. If you’re going to propose it as cashless, you might need to change how you’ll price things.”