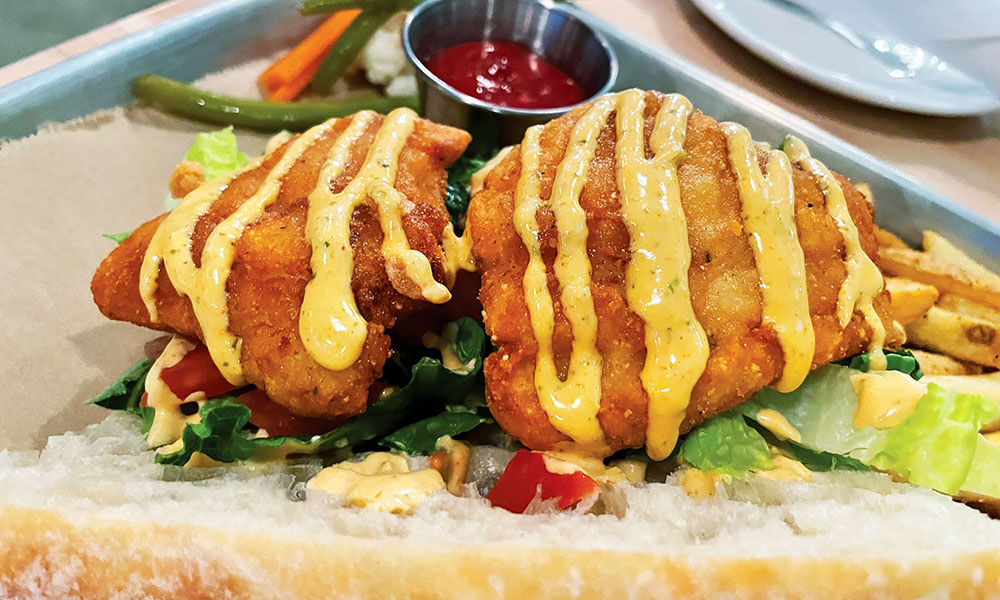 The po’boy at Southern Fare comes with crispy salt-and-pepper-seasoned fries and pickled veggies.

Never judge a wine based on its label, nor a book by its cover.

But what can be said about a restaurant by its bathroom wallpaper?

How can a person dismiss — or forget — flamingos with women’s legs wearing stilettos?

Southern Fare, located at 189 W First St. in Oswego, has just that.

Why am I starting out with comments about the wallpaper of an impeccably clean bathroom? It’s not expected. It’s right in line with what seems to be Southern Fare’s M.O. — “be atypical.“  And there aren’t too many restaurants in the region specifically focusing on southern-style cuisine.

Southern Fare is a belle in itself. Where many restaurants in Oswego work with their historic walls and aesthetics, the new eatery boasts a chic, minimalistic look. The walls aren’t suffocated by miscellaneous tchotchkes and random memorabilia. Instead, large-paned windows welcome plenty of natural light and a view of the city. Overall, it’s comfortable not only for these crazy times but the normality down the road.

The one-page menu (the beverage list is on the other side) offers a variety of snacks, small plates and entrees.

Honestly, choosing among the selections made for difficult decisions.

While we mulled everything over — brewskies and chips and dip. Beers range from $4 to $7, depending on the brewery and style.

I also enjoyed one of the house cocktails, the Smoke & Mirrors ($10). The beverage (smoked over cedar), which features Sazerac rye, chai rum, Benedictine D.O.M, hit the spot. Plus, cocktails can be prepared for takeout and enjoyed at home.

The homemade chips and IPA beer cheese ($7) was a great primer. Warm cheese and candied bacon proved to be a dynamic pair. Tring to ration the cheese is a challenging task. It’s tempting to take as much of the queso as possible; however, this is as much of a social faux pas as drinking directly from the cup. The temptation is real.

Five hushpuppies come in Southern Fare’s small plate ($8). The golf ball-sized orbs of sweet cornmeal are fried up to a crispy, golden brown. The maple butter serving as a complement  to the corn fritters boasts a subtle, sweet maple flavor. (The same rules apply to the butter as the IPA cheese.)

Sliders were created to convince people they were getting more food but, aside from the bread, is an appropriate amount. The brisket sliders (three for $13) are generous in size. The mini rolls hold the eponymous meat and pickled onions. The horseradish goat cheese, two potent flavors in their own right, blend in well with the tender, smoked meat.

Because Brussels and bacon make a valiant pair, we requested a side ($4). The generous side was much larger than expected and was presented in a small cast iron skillet. The brilliant green sprouts still had a fresh crunch without being completely roasted. The pieces of bacon were thick cut and on the crispy side. I personally enjoy a nice char on my Brussels but the bits of bacon added that textured necessity.

The jambalaya ($19), a notable New Orleans staple, was bright and beautiful. Three breaded shrimp were some of the crispiest shrimp I’ve ever enjoyed — accompanied with long grain rice with plentiful slices of andouille sausage, scallions, thick pieces of celery and bell peppers. As a heat lover, the spices were delightful, not overpowering. Some may feel differently. As a whole — incredibly filling and memorable.

The fish po’boy ($14) featured cornmeal-crusted catfish on a bed of tomato, lettuce and onion, and drizzled with remoulade. Although a typical New Orleans po’boy is larger, the bread, crispiness of the fish, and the overall flavor of the Southern Fare proved size does not matter.

The po’boy came with crispy salt-and-pepper-seasoned fries and pickled veggies. The fries were great but there was something about the veggies that really stood out — their crispiness.

The vinegar wasn’t overpowering either, and the original flavor of the veggies were able to come through.

The fried chicken ($17 for half-bird, $20 for whole) is talk for the town. The incredibly crispy exterior — thanks to more cornmeal and distinct pepper — gives way easily when bitten into. This presents perfectly tender, juicy chicken bursting with flavor.

Mac and cheese came as a side for the fried chicken and presented in a small skillet, similar to the Brussels sprouts. The flavor was delicious with cheddar on the forefront. The pasta itself was overcooked, unfortunately.

When you hit up Southern Fare, be prepared to drop an easy $100 before tip (for two people), like I did. It’s not that the place is expensive — it’s fairly priced, in my opinion. It’s just that you’re just going to want to try everything you can. There was much more I wanted to explore, including the frog legs and shrimp and grits, but that’ll be for next time.