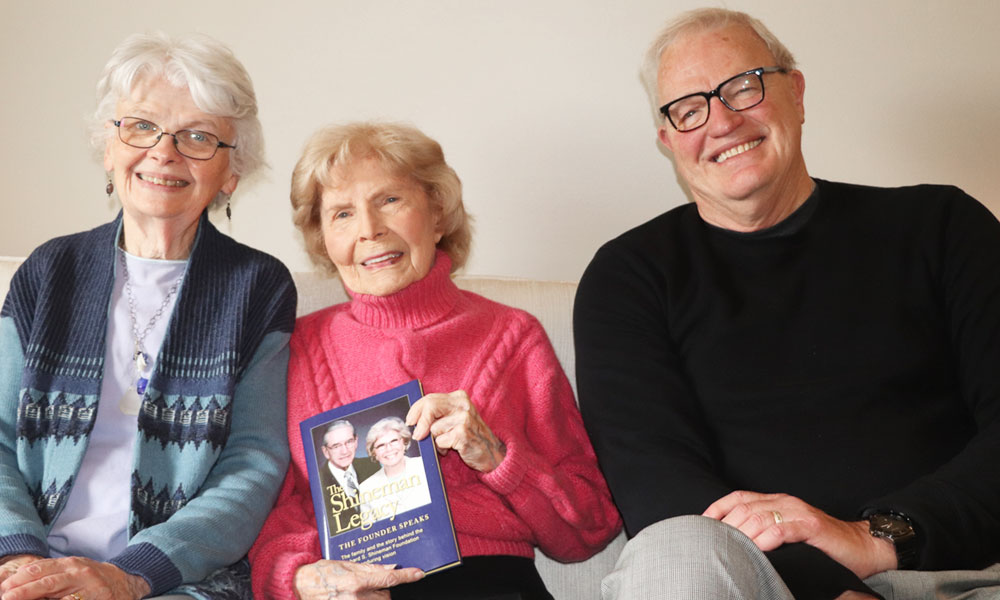 Everyone in Oswego County and the broader Central New York community knows about the Shineman Foundation, the private foundation that awards more than $1 million annually to support regional nonprofits.

The organization’s wide-reaching impact is hard to miss.

But the story of how the foundation started and the man behind it is not as well-known.

Enter “The Shineman Legacy: The Founder Speaks,” a new book that delves into the humble beginnings of what has become one of the region’s most beloved and powerful organizations.

Jeff Rea, a newspaper veteran and former employee of SUNY Oswego, wrote the book, which he describes as equal parts memoir and philanthropic history. He was tasked with the project by none other than one of the founders of the organization, Barbara Shineman.

“Barbara was getting concerned that the memories of Dick would fade and all that Dick wanted for the foundation,” Rea said.

Of paramount importance to Barbara Shineman, according to Rea, is that people remember that it is technically the Richard S. Shineman Foundation.

After all, it was his initiative and inheritance that made it possible.

Richard’s father Edward Shineman Sr. made his millions at the Beech-Nut Packing Company, now known as the popular Beech-Nut Baby Food company. Edward started work there in 1904 as an entry-level accountant, climbing the corporate ladder to take positions as treasurer, vice president and eventually as chairman of the board in 1948.

Edward retired in 1954 and when he died, left behind a fortune for his children. Richard would inherit somewhere north of $30 million, says Rea, though no one ever suspected it.

As is explained in greater detail in the book, Richard and Barbara led humble lives. They lived for most of their lives together in a simple ranch-style house across the street from SUNY Oswego, where both of them continued working as professors even after the inheritance arrived.

Although Rea said the Shinemans gave away hundreds of thousands of dollars before Richard died in 2010, the wealth was nurtured rather than spent.

“By all accounts, he didn’t spend a tiny fraction of it during his life,” Rea said. “He wanted to do good with that money.”

Little did Richard know just how much good he would do. The Shineman Foundation, which began with a bequest of $25 million, has grown to more than $38 million today. By the end of 2020, the foundation had awarded nearly $12 million to dozens of nonprofits and other organizations in Central New York.

Perhaps the largest beneficiary has been SUNY Oswego, which was able to build the multi-million dollar, 233,000-square-foot Richard S. Shineman Center for Science, Engineering, and Innovation. It’s a state-of-the-art math and science facility in honor of Richard, a former SUNY Oswego chemistry professor.

The college has also been able to expand its Sheldon Institute for Barbara Shineman Scholars, a program and scholarship fund to train the next generation of educators in honor of Barbara, who taught as a professor of education at SUNY Oswego.

Executive director of the Shineman Foundation Karen Goetz said the difference this organization has made in the local community is nothing short of dramatic.

While Rea said Barbara thinks Richard would never have wanted his name on a building, let alone a book dedicated to his memory, “The Shineman Legacy” serves a purpose beyond just recognition.

“Barbara has been singularly focused on what it was that Dick wanted,” Rea said. “She understands that foundations have to grow, evolve and adjust to conditions on the ground in Oswego, but she also realizes that it has to keep his core values and vision.”

The hope is to provide a guide for the next generation, and specifically those future Shineman Foundation board members, about who Richard was and his goal to make this gift a “catalyst for change” in Oswego County.

“Now there is a book that new members of the board will be given and expected to read so they don’t forget the beginnings and the vision of this foundation and they can stay true to that vision and stay true to the memory of Richard and Barbara as they carry out all of the things that the foundation will be doing in the future,” Goetz said.

“The Shineman Legacy: The Founder Speaks” is available for purchase now at the River’s End Bookstore in Oswego and amazon.com. All proceeds will go to the Richard S. Shineman Foundation.

The Port in Oswego: Much More Than Just A Port