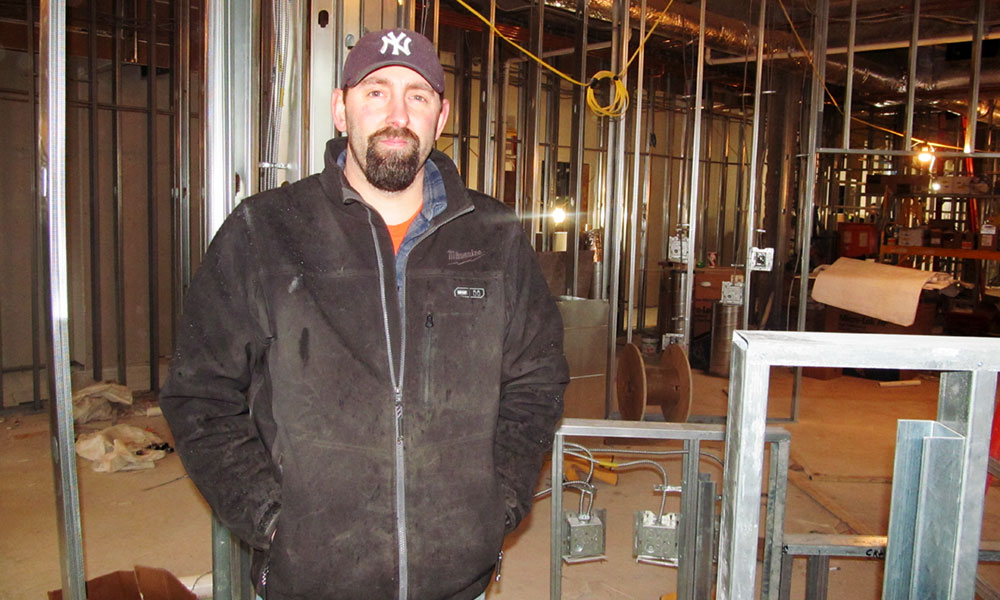 Christopher Demars worked for several contractors before being laid off during the Great Recession of 2008. Armed with solid experience, he started his own heating and air conditioning business and he hasn’t stopped growing

While business owners strive to have a sense of accountability, Christopher Demars takes the concept to a higher level.

Demars is founder and president of C.J. Demars Mechanical, a residential and commercial heating and air conditioning business that was established in Fulton in 2009.

Seven years ago, he expanded and created a shop at 24 E. Cayuga St., Oswego.

Demars said the driving force behind establishing a location in Oswego was the lack of work in Fulton.

Within the first two or three years of doing business in Fulton, Demars realized that Oswego was where all the work was.

“We needed a place to do some off-site work,” he said. “There are some major players in Oswego that really helped give me a shot.”

Those players, such as entrepreneurs Atom Avery and Ed Alberts, are the same developers who are transforming the Port City’s downtown landscape today.

He said as 2020 winds down, nearly all of his work is in Oswego.

“It’s nice having a go-to location that is within five minutes of all our projects,” he said.

On occasion, his crew will do jobs in Syracuse or at locations along state Route 31 in Onondaga County.

When Demars opened his Fulton location, which is used strictly for office space and administration today, he was already well established in Oswego.

Developers such as Anthony Pauldine and the Paul Castaldo were instrumental in giving Demars the opportunity “at some fairly decent work,” he said.

“If it were not for people like that, we really wouldn’t have a reason to bury our shovels,” he said.

C.J. Demars Mechanical has been instrumental in many local projects, including Avery’s Litatro Building at West First and Bridge streets and Ed Alberts’ Riverwalk/22 Crossroads along West First Street, both in downtown Oswego.

The business also worked on the new Burritt Motors facility last year as well as the Children’s Museum of Oswego.

Demars and his seven-man crew are involved in plans and specifications as well as designing and building work for new installation. The business also provides maintenance for everything it installs.

A high school dropout, Demars learned his trade from experience while holding himself to the highest of standards.

“There’s an intricate part of my character that wants to do things beyond my customer’s expectations,” he said. “You never want to disappoint anybody.”

Demars has worked for “too many past employers who only did the bare minimum of what they were expected to do or tried to short change customers to try to make more money,” he said.

“I never wanted to do anybody wrong. On occasion, you’re bound to make mistakes, but from an integrity standpoint, you have to do things well and right whether somebody is looking or not,” he said. “Because at the end of the day, another heating guy at the minimum is going to come behind you and see your work for what it is. He is going to be your biggest critic.

“You want to do things to impress the next guy coming behind you and not make more work for him.”

When he launched his business in Fulton in 2009, he was starting many projects with zero dollars in the bank.

This is where his faith and belief in a higher power came in.

“Some of that is just relying on God’s provision for your meals and providing for your family,” he said.

Demars said there were many projects that he was awarded when he desperately needed to provide materials and a paycheck for a helper.

“I really had to rely on that phone call to come in for steady income to pay for jobs that were coming up,” he said.

He said every time he got into a pinch financially and uncertainty reigned, he and his wife would pray.

“Within a day, I would have a month’s full of steady income and that would help to give us enough capital to get through some of the bigger projects, which has caused us to grow as we have,” he said.

“It’s clichéd to preach about it, but to experience it first hand is another story,” he said.

Demars said he is not accountable to just people.

“If you have a belief system where you’re accountable to God, there is another factor involved. You can see what’s not seen by a normal human being,” he said.

“If I’m to do things with integrity, I am doing it in his sight, not just the customer’s,” he said.

Demars said there is a whole demographic of people that is “very good, honest and faith-based.

He said many people are unsure of what to seek out in terms of services these days.

“Our industry can be very dishonest. There are people who don’t think twice about taking advantage of you,” said Demars, noting that a segment of his website speaks to just that.

“I am telling customers, ‘I think the same way you do. You don’t have to worry about me’,” he said.

Demars recalls that while working for past employers, it was not uncommon for him to be replacing furnaces unnecessarily.

“There was nothing wrong with them. It was because somebody wanted to make money. A salesperson sold up instead of just fixing a simple problem,” he said. “Customers were spending thousands to replace it. I never liked that.”

He said repair technicians can go through six months of a customer’s savings on a furnace replacement.

“And that’s all they got. If someone should replace a furnace or boiler, I educate that person first. I am not going to put them in a position to sell them something; I am going to give them options,” he said.

He details the repair cost, how long he thinks a customer has with a given piece of equipment, and the cost of replacement.

“I don’t want to scare them. I don’t know where they are financially, and I just want them to make the right decision,” he said.

Although he is swamped with business now, Demars makes sure that he takes care of customers that he can’t get to right away.

Customers will call him and ask for consultation in regards to whether or not they are getting a legitimate deal from another technician.

“I’m OK answering those questions. I don’t want to undercut any other technician, but if someone calls, I want to take care of them the best I can.”

Demars worked for several firms in Syracuse doing residential and commercial work before the recession struck in 2008.

“I found myself laid off and just started to throw resumes out there,” said Demars, who at that point was an estimator and project manager.

“Nobody was biting and nobody was hiring, so I just started cold calling local contractors looking to bid on stuff on my own,” he added. “That’s how the ball got rolling.”

“My fourth child was on its way, so I did it for the family. I think my wife was about four months along when I got laid off from the last company I worked for. There’s some pressure in that,” he said.

“There’s always fear of what you don’t know when it comes to running a business,” said Demars, noting he did have a taste of the back office process and “always swung a hammer.”

“You go into it thinking it’s going to be a cakewalk and you’re going to make a ton of money,” he said. “And when you step into it, there’s some excitement, but also concern because you are day-to-day and week-to-week on projects.”

“The biggest challenge was the anxiety that resides within you of what you don’t know,” he said.

He said it is vital to understand the legal and tax aspects of the profession, skills he learned without having any official business schooling.

Demars also makes himself available as an emergency service technician on a 24/7 basis.

His wife Leah, who works as a teacher’s aide for the Oswego City School District, attends to some administrative duties as well.

“Without her, I wouldn’t be able to do half of what I do,” he said. “She is a good mom and holds the home well. Up until two years ago, she didn’t work. She raised our children, and her being a solid, steady influence in the home enabled me to focus on running the business.”

“I’m working for my family first. It doesn’t always seem that way because of the amount of hours I work, but they are my first concern,” he said.

In terms of COVID-19, Demars said the pandemic has not forced him to change his business model, but has shone the spotlight on the labor field.

“We’ve always had a hard time finding qualified labor to meet the demand,” he said. “But with COVID-19, if there is anybody who wants to work, they are working. Nobody is looking for a job.”

Demars said there is a significant amount of work available in the Oswego area, but capable workers are hard to come by.

“We’re very high in demand, but there’s nobody to pull from,” he said.

Efforts have been made to recruit workers out of high school and try to get them excited about the field, but even that is “slim pickings,” said Demars, noting that even vocational-technical programs in the area don’t necessarily fill the demand.

A skills gap that has plagued Oswego County for years has been experienced by Demars.

The average age of individuals he has working for him is 50.

“They are going to be retiring in the next 10 years, and this is almost industry wide,” he said.

He said the value or price tag on existing workers will skyrocket going forward or he is not going to be able to find anybody.