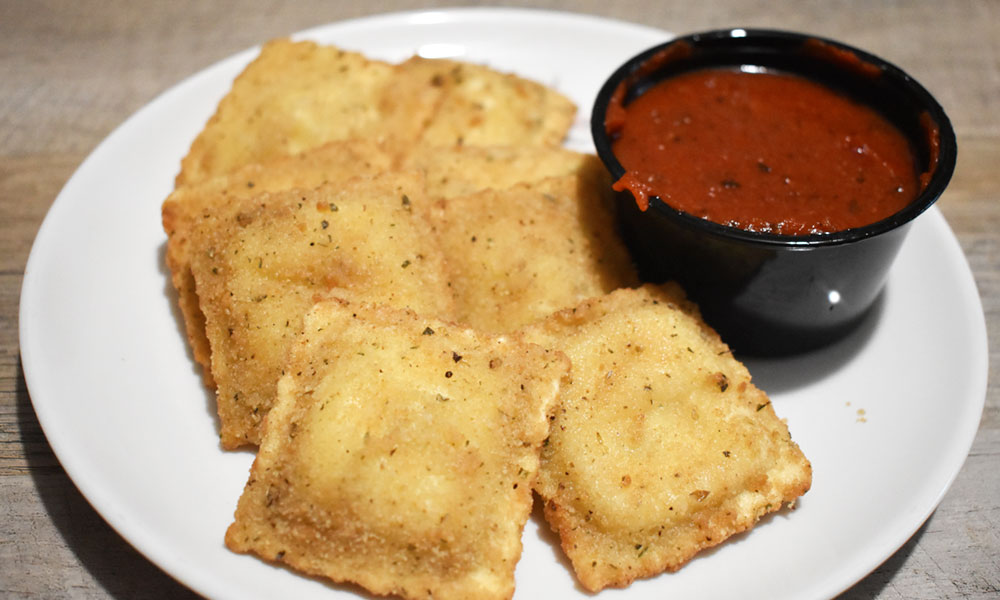 Fried ravioli at Canale’s: Lightly breaded and seasoned ravioli did not survive as leftovers.

When it comes to Central New York Italian cuisine, Oswego holds its own with Utica and Syracuse. Whether it’s better or not is definitely subjective and hometown favoritism is a huge factor.

However, there is a noticeable difference between good and bad efforts when it comes to this notable nationality’s cuisine.
Since writing for Oswego County Business Magazine: Vona’s knocked it out of the park, Bridie Manor didn’t fail, and now the notable Canale’s Restaurant, 156 W Utica St., was put up to the test.

As of early June, due to COVID-19 pandemic restrictions, Canale’s is offering only takeaway meals. Order by phone or online, drive up to the restaurant, let them know you’ve arrived, and they’ll bring out the food to you.

I brought a thermal bag with me and the food temperature was great by the time I got home to Syracuse. The aroma of the food did get the best of me. By the time I got to the light at the corner of North Second and Utica streets in Fulton — I cracked the thermal bag and needed to eat something.

This reminded me of a family tradition of mine, originating on my maternal side of the family. When getting bread from Columbus Baking Co. in Syracuse, we’d always order two sandwich loaves. One of those would be consumed on the nearly 20-minute ride home (10 minutes if going to my Nana’s).

I wanted the fried ravioli ($8.50) but it was buried in the bag. Eating the veal parmigiana ($14) would be silly. Opting for either side of pasta — penne with rosé sauce or linguini with alfredo ($2.50 upcharge each) — would be impossible without a fork. Opening the box to get a look at the individual-sized chicken riggie pizza ($13), it was too fresh and needed to cool down.

The slices of Italian bread (four slices, complimentary) were just right. It’s no Columbus bread — cue hometown bias — but it’s good, light and airy Italian bread. After enjoying some of this carb-heavy meal, the remaining two slices were toasted and buttered the following morning to complement breakfast.

I tapped into the fried ravioli immediately after photos. The lightly breaded and seasoned ravioli survived the trip home but did not survive as leftovers. Sometimes ravioli as-is or fried can get hard and these were not. The marinara sauce was really flavorful. The Italian seasonings of combining both were not overwhelming because, no matter a love for Italian seasonings, it is easy to overdo it.

The veal parmigiana also did not survive to be enjoyed another day. The flattened meat was tenderized to perfection and was lightly breaded; some of the breading did want to exfoliate with some knife cuts. Along with the marinara sauce, this added up to a notable veal parm.

The veal came as-is and not on top of pasta or greens. However, two sides came with the entrée. Instead of opting for the familiar fries, onion rings or potato for no additional charge, I wanted to try Canale’s sauces. As stated, the $2.50 upcharge for each pasta side wasn’t intimidating.

I did not opt for a salad either. Canale’s greenery bowls didn’t stand out from typical iceberg lettuce-based creations.

The amount of each pasta side were suitable servings as themselves. The linguini with alfredo was as simple as can be — al dente noodles with creamy, flavorful white sauce. Although alfredo sauce isn’t my go-to, I’d opt for this again in a heartbeat. Teetering on the edge of carb coma, I saved much of this side for a second meal and added chicken, spinach and cherry tomatoes.

The penne with rosé sauce also survived to be another meal, served over sautéed spinach. The penne was cooked very well and the rosé sauce is very noteworthy, like the favorite child of the sauce family. The sauce parents use the rosé as an example to the rest of the crew, much to the ire of riggie and other vodka sauces. You should really aspire to this, they would say. The puttanesca, Bolognese and alfredo sauces are the eye-rolling rebels. Meanwhile, marinara and aglio e olio sit back as unaffected people pleasers.

Chicken riggie pizza is also something noteworthy. Although I wasn’t a fan of the airy crust, the topping of the pizza was everything you can ask for with chicken riggies: thicker sauce, hearty pieces of chicken, peppers, and it wasn’t overly spicy. For a nine-inch pizza it’s on the pricier side but there are essentially four toppings with a specialty sauce.

As for the crust, since this was the first time I’ve had their pizza, I’d request Canale’s to crisp it up a bit. It physically, not “flavorly” flopped (eating it in the car would have been an issue).

Before tip the total came to $43.74. After restrictions are lifted, I anticipate experiencing Canale’s in its full form.

In the meantime, please keep supporting your local businesses.