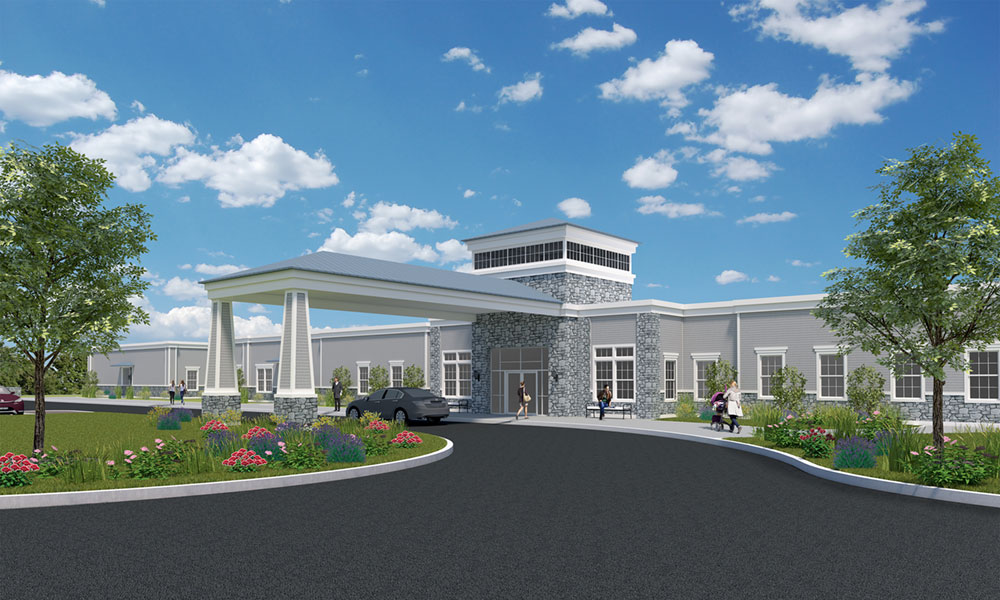 Rendering of a new $17 million behavioral health center Oswego Health is building at the former Price Chopper location in Oswego.

Oswego Health is not only attending to the health care needs of Oswego County. It is also helping to keep the region’s economy rolling.

The latest numbers indicate that Oswego Health has a total economic impact of $207 million on the communities it serves.

Over the last two years, its annual payroll has gone from $63 million to $75 million. That is what it is paying to its more than 1,200 employees in competitive wages who largely live in the community. Oswego Health is the second-largest private employer in Oswego County, ranking only behind Exelon Generation.

Of course, a multiplier effect kicks in as these workers also buy homes, groceries, and support local businesses while participating in a myriad of other activities.

Additionally, Oswego Health is investing in about $25 million to $30 million in construction projects while employing construction trades workers.

It is constructing a new $17 million behavioral health center at the former Price Chopper location in Oswego.

Internally, it is investing $8 million in upgrading its inpatient medical-surgical rooms. Additionally, SUNY Upstate Medical University recently did a $1 million project to enhance its presence at the hospital.

“We are paying that money out on top of payroll dollars for fixed staff,” said Michael Harlovic, president and CEO of Oswego Health. “We continue to be in a growth mode.”

The organization’s growth in the areas of primary and specialty care, psychiatry and the addition of physicians and mid-level practitioners is expected to increase Oswego Health’s overall economic impact.

“We have growth plans under way that potentially involve new facilities and sites, and upgrading what we already have, especially in the Fulton market,” he added.

In the wake of the city of Oswego being granted $10 million in state Downtown Revitalization Initiative funds, the city of Fulton is embarking on its own revitalization thanks to receiving the same level of financial assistance last year.

“We have the opportunity in Fulton to continue to upgrade services at our Fulton Medical Center,” said Jeff Coakley, executive vice president and chief operating officer at Oswego Health.

He noted Oswego Health has applied for $2 million in DRI funding to upgrade its facility in Fulton to include a freestanding emergency department (ED).

“That really is an evolutionary process. We began providing urgent care service in Fulton in 2009, and now we are able to transition some of those people with the growth of ConnextCare and with our own growth in primary care in Fulton,” Coakley said. “Those people are finding a home in primary care and don’t need the same level of urgent care.”

Providing a freestanding ED will offer more concentrated services that are more accessible to the Fulton community, Coakley said.

Annual payroll at Oswego Health over the last two years has gone from $63 million to $75 million. It employs mopre than 1,200 people.

For advanced needs, patients can come to Oswego Hospital or be directed from Fulton to a tertiary facility in Syracuse in a convenient manner, he said.

“If you look at our economic footprint here, it’s not just the city of Oswego, but also Fulton. We also have an important outpost in Central Square, where we are providing urgent and primary care, lab, radiology and physical therapy, and that continues to have an impact in that community,” Coakley said.

He said the Central Square area is growing at a quicker rate than the rest of Oswego County.

“We are looking at options to continue to develop services there ourselves as well as in collaboration with others,” he noted.

Coakley said he foresees the new ED to be operational this year.

The path involves going through a certificate of need process, making applications to the state Department of Health, and physically changing the structure to meet DOH requirements for a free-standing ED.

“But we think it is possible to have that construction started this year,” he added.

The inpatient medical-surgical units renovation at Oswego Hospital is moving along quickly and the first phase of the three-phase project is expected to wrap up in April.

At that time, Oswego Health will be able to open up its first two banks of rooms on the third and fourth floors of the hospital to give the community and patients a first glimpse at what those entire units are going to provide.

“It’s really a completely different level of hospitality as it relates to health care service,” he said. “It truly will be a healing environment for those patients in the medical-surgical units.”

The entire project is anticipated to be complete in November.

Harlovic noted Oswego Health was at a competitive disadvantage with its older double occupancy rooms.

He said it also affected recruitment efforts, but now work stations in the rooms offer more appeal to physicians and nurses who will have access to computer technology.

Lifts above beds will make it easier to move patients, Harlovic noted.

“They will be healing in nature, warm, comfortable, nice and calming,” he added.

Rooms will also feature an ultraviolet clean air system that uses germicidal ultraviolet light to sterilize mold and other microbes.

Also featured will be a filtered air system using a technology that reduces particulates in the air to practically zero.

Meanwhile, the new behavioral health building is expected to be finished in July with certificates of occupancy intact in the fall.

“We will have mental health services right here in Oswego County,” said Harlovic, noting that the facility will be designed to reduce adverse factors in the county such as the suicide rate, which is about double that of any other county in New York state.

Harlovic said the new center will help in terms of early identification of mental illness, prevention, access and the availability of treatment options.

He said the facility itself will exude a healing environment as well and feature a residential feel.

“Even its presence will destigmatize some of the issues that go along with mental illness,” he said.

It is already benefitting Oswego Health in terms of recruiting health care professionals.

Also on site will be case management, primary care and other services.

Featured will be 20 acute adult beds and 12 geriatric beds.

As the building process has commenced, Oswego Health is getting referrals from all over the state.

“We have referrals coming in right now because of our reputation and willingness to treat patients and we are getting that immediate need met here in the county of Oswego,” he added.