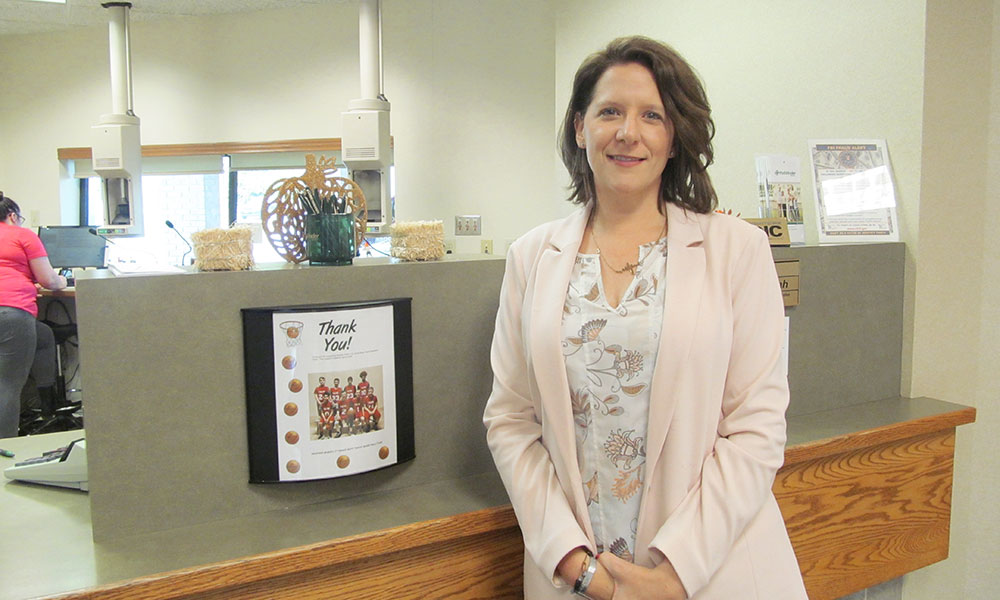 What do you get when you mix a professional woman, a community volunteer and a devoted mother of two who is now an empty nester?

However, behind the political persona is a person that has both passion and purpose when it comes to not only her profession, but to life itself.

Before her ascent to being the market manager for Pathfinder Bank’s Fulton location and the mayor-elect of Fulton, she navigated through a myriad of opportunities and challenges.

“I was still in my hometown, but I didn’t feel connected to the college life. I wanted to get out into the world and start a career,” she said.

“I learned the importance of leadership early on,” said Michaels, who attributes her strong work ethic to a hard-working family background.

She would then leave school and start work at Oswego City Savings Bank at the age of 19. She started out as a teller and fell in love with working in a professional setting.

It wasn’t before long that an opportunity arose within Pathfinder Bank, and Michaels was incentivized further knowing that Pathfinder supported continuing education.

Early in her career, she explored various educational opportunities.

Once her children got older, she decided to ramp up efforts to attain educational goals, and took several classes at SUNY Oswego and Cayuga Community College.

She was then asked by Pathfinder’s management team to participate in the ABA Stonier Graduate School of Banking, a three-year program at the University of Pennsylvania and the Wharton School.

She graduated in 2016, right around the same time she was contemplating running for mayor of Fulton.

Michaels would then discover the American Bankers Association Campaign School for Bankers in Washington, D.C., and she was the only female who attended out of a group of bankers from across the country.

From there, Michaels would participate in the highly selective Women’s Campaign School at Yale University.

After completing that program, she then participated in the CNY Political Leadership Institute in Syracuse, which featured more local-level politics.

“It was after that I said, ‘Yes, this is my calling. I’m ready to run. I can do this,’” she recalls. “It wasn’t about just throwing my hat in without being prepared. To make a commitment like this to my community and family requires research, and I don’t do anything without a great deal of prep.”

“Being a woman in this arena has its challenges,” said Michaels, noting there was a real focus on how women survive in the political arena at Yale.

One of Michaels’ goals is to empower other women to take on leadership roles.

While she now represents the city of Fulton and the business community, she also intends on being a role model and example for all women.

“If I do nothing else, I will have been successful if I inspire other young women to be leaders,” she said.

“We have to empower one another and raise each other up,” she said. “We have to set examples within the community, and I want to be that example.”

Being that her husband Kevin hails from Syracuse and she was an Oswegonian, when the couple married they decided to buy a house halfway between — in Fulton.

She and her family have lived in Fulton for the past 16 years.

“This is where we raised our children,” she said.

“My husband works out of town during the week, and so we have a very unique life in the sense that we are spread out all over the place,” she said. “Some people see it as unusual, but I see it as our unique story, and this is the chapter we are in. And it simply works.”

Her husband works as a district manager for Coca-Cola, with his territory being the southern tier of New York. He lives in Pennsylvania.

Michaels is officially an “empty nester.”

“I now have the time to go after my ambitions, and not have the added pressure of having to take care of the home. I did that for many years, and now when I get home, I hit the reset button and we start all over the next day,” she said.

“That’s true not only with my marriage and relationship with my husband, but with my children too. They’ve grown up and have gone their separate ways and are busy starting their next chapter. I find that when they come home, that time is really special,” she said.

Michaels practices meditation, and embraces music and her alone time.

“I make sure I find that time. While it wasn’t always the case, I now find myself not turning on the TV as much,” she said. “I am not big into social media as a lot of people are, although with the political side of it, I have had to get back on some social media.

“But for me, it’s about enjoying music and family time. You have to know what’s important to you and what makes you feel good.”

She goes to Counseling & Healing Arts in Fulton and meditates under the guidance of instructor Susan Brockway.

“It’s about becoming one with yourself and practicing breathing techniques,” said Michaels, noting that when she goes home, she uses calmness and meditation phone apps as well.

“It’s connecting with your breathing and getting your mind focused. I find myself doing it throughout the day,” she said.

“It really makes a difference. You can do it at the stoplight, or sitting at your desk,” she said.

“Let’s face it, life is stressful. It’s important that you can identify the triggers and have techniques to help you get through those stressful moments,” she added.

With her new mayoral duties, her high energy, excitement and passion will be on display.

“I was always very active as a child,” said Michaels, noting she played softball and spent 15 years as a dancer.

“I actually had a desire to become a dance teacher for a long time. I always stayed very active, and then life happened,” she said.

“And when life happens, you sometimes lose focus on yourself, because you put everything else as a priority,” she said. “I’m no different that anyone else. We all have busy lives and lose our way from time to time. I was fortunate to find meditation. It taught me to focus on myself and not feel guilty about doing so. I’ve learned through the process that when you can take care of yourself and love yourself first, it makes it much easier to be in healthier relationships with other people. So that’s what I did.”

Michaels is vice president of Oswego County Opportunities’ board of directors, an organization she views as an “amazing resource” that is not widely known about in the region.

“We focus our efforts making sure we get our message out there” in terms of OCO’s human services mission and vision, she said.

She travels throughout Oswego and Onondaga counties teaching financial health and wellness.

The program teaches participants everything from budgeting, understanding credit, keeping safe in an electronic workplace, and awareness concerning financial fraud and elder financial abuse within the aging population.

Michaels’ role at Pathfinder Bank has evolved over the years, and Fulton is her primary market as a branch manager.

She has worked at Pathfinder Bank for 24 years.

“The primary focus of my work is to be out in the community. Pathfinder Bank’s focus has always been to give back to the communities that we serve,” she said.

For Michaels, that means engaging in the community, be it at board meetings, volunteering, networking or teaching.

That passion started when Michaels was a child.

“My father Don [Buske] was just someone who was always involved by helping others, volunteering and getting out in the community. It was just something that we always did,” she said.

“I grew up in that environment. My father always taught me that giving back was the right thing to do,” she added.

While born and educated in Oswego, Michaels spent much of her youth in Fulton. Her father worked at Fulton Container Corp. while several of his 13 siblings found their home in Fulton.

“I emphasize the importance of family with my employees, co-workers, friends and people that I know. Life is short and time moves by so fast. At the end of the day, our family is our support system and for me what gives me the most joy in life,” she said.

Michaels worked her way up through the ranks of Pathfinder relatively quickly.

She started as a teller, became a financial services representative and worked in the bank’s finance department. She became assistant manager at another bank branch before being asked to assist in the opening of the Central Square office.

A move to the Fulton branch dovetailed nicely with her family’s plans to buy a house there.

“There was an opportunity here in Fulton to make an impact and turn the branch around,” said Michaels, noting she was up for the challenge.

“I came here as the assistant manager and soon after was promoted to manager of the branch, and I’ve been here ever since,” she said.

Michaels feels a love for her community.

“Fulton is on the cusp of something great. You can feel it and you can see it,” she noted. “It’s been exciting to be part of that process and to see the community evolve.”

Michaels fully supports her staff learning and seeking to reach their goals, mainly because she was given the same opportunity.

“I don’t want to hold anyone back, so when they are seeking to grow within the organization and take on new challenges and positions, I fully support that, because I know firsthand the impact that can have,” she said.

Michaels also brought her financial and community development expertise to the table as a key member of Fulton’s Downtown Revitalization Committee. The city was awarded $10 million in DRI funds in 2019.

As president of the board, she was serving as the interim executive director of the Greater Oswego-Fulton Chamber of Commerce when Oswego received its $10 million in DRI funding in 2016.

She was closely involved with the Oswego process, sitting down with focus groups and participating in discussions.

When Fulton applied for 2019 funds, Michaels was asked to be on the DRI committee.

She said the level of excitement upon learning Fulton had been awarded funds “can’t be put into words.”

“That’s why I say Fulton is on the cusp. It’s the small victories we need to celebrate, such as the progress being made through Friends of Fulton Parks, Fulton Block Builders, Fulton Footpaths and now the DRI.”

“It was a very strategic process and there was a great deal of planning involved,” said Michaels, noting she learned patience is required as well as a well thought out approach.

While campaigning, Michaels received feedback from the public that indicated what the city’s major challenges are.

“The three major takeaways are safer neighborhoods, and that includes the drug and crime issues; improving our failing infrastructure, and stimulating our economy, and I think the DRI is going to help us to do that,” she said.