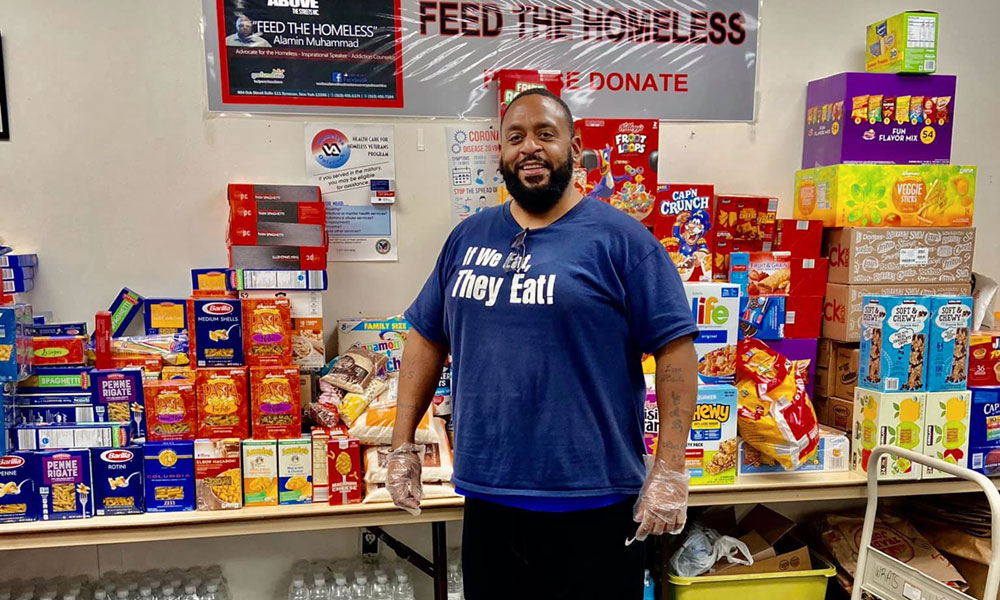 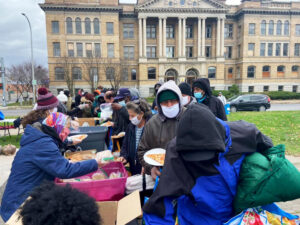 When Al-amin Muhammad hands out a lunch or clothing to a homeless person, he knows firsthand what it feels like to need and receive this kind of help.

Muhammad lived on the street for a decade while living in Georgia. He had dealt in drugs and served time in prison. Eventually, he contemplated ending his life.

“I overcame that with a good caseworker who empowered me to get myself together,” he said.

It was Ronald Santos, a social worker and addiction counselor from Atlanta Center for Self Sufficiency, who helped Muhammad turn his life around.

Shortly after, Muhammad moved to Syracuse and learned that numerous studies named it as one of the poorest cities of its size in the US.

Feeling burdened to help, he started We Rise Above The Streets Recovery Outreach, Inc.

He began hosting cookouts for people in need — regularly feeding 2,500 in a single event — and delivering food to people struggling to get enough food. He also started talking with community leaders about what could be done to alleviate poverty in Syracuse.

By 2015, he started Sandwich Saturday, in which 15 volunteers would meet at Lincoln Middle School on James Street to assemble sandwich lunches to deliver to about 200 to 300 homeless and less fortunate people each week near Rescue Mission. The group also began collecting and assembling personal care kits and clothing items for distribution.

“I wanted to bring the community together to help the homeless and less fortunate,” Muhammad said.

He has lived the life and knows what homeless people need to survive: food, clothing, hygiene items and to communicate with people. When training volunteers, he tells them that the first thing to give is a smile.

“The majority of the homeless are just like us but a tragedy happened,” Muhammad said.

A sandwich handed out on a Saturday is only the start. He builds a level of trust with those he serves and helps them connect with resources to help them become self-sufficient, Muhammad also offers classes at his office on Oak Street. Anyone interested can learn about good health, gaining employment and a getting a place to stay.

“You take a drug test before going to class,” Muhammad said. “If it’s positive, they go to Narcotics Anonymous before they come back. I’ve been out there in the community.  When people see that trust and start listening to you. You really understand what’s going on.”

Two years ago, a homeless young man at the Dunkin Donuts on Salina Street rested his head on the table in his booth while waiting for his phone to charge. A worker thought he was sleeping in the restaurant and poured ice water over his head, causing him to flee the building.

When Muhammad watched a video of the incident on social media, he felt touched by the helpless look on the young man’s face. He knew he had to advocate for him. The following day, Muhammad protested on his behalf outside the restaurant and the event went viral on national news. The following week, 575 volunteers showed up to volunteer and assemble sandwiches for the hundreds of people in need waiting to receive them. 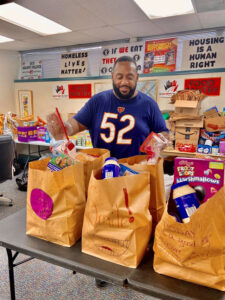 It still is hard for him to believe his own success story could happen to “a person like me with a background like mine, who gave up on life and was invisible and has been through so many trials and tribulations,” Muhammad said. “Only one person believed in me and told me I am someone and I can strive for greatness and help others.”

In addition to operating We Rise Above the Streets, Muhammad works as a paid public speaker at events nationwide, although that has fallen off since the pandemic hit. He began providing home care to children with autism.

While he had three months off in the spring, he wrote a book, “My Purpose of Life: One Man’s Tale Inspires a Wave of Humanity,” available as a print-on-demand title for $35 from Amazon and Kindle.

“It’s about my story and everything I’ve been through,” he said. “There’s a message in the story to never give up.”

Although Muhammad went out to help the community by himself for the summer and fall, Sandwich Saturdays started up again with volunteers in mid-November. Volunteers must register before coming.

We Rise Above is funded mostly by community-sourced donations; however, Muhammad is considering applying for grants. With his organization’s five-year history, he feels sure he is in a better position now to apply for grants successfully.

“My mission was accomplished in that we’re doing something that no one ever did: bring community together from all different walks of life, rich, poor, kids, adults,” Muhammad said. “Were’ all there to help humanity and to give information to the community. We keep eye contact when we meet the less fortunate. We do more listening and less talking. Sandwich Saturday isn’t just a hobby. You take these tools with you Monday morning. I’ve really been blessed.”