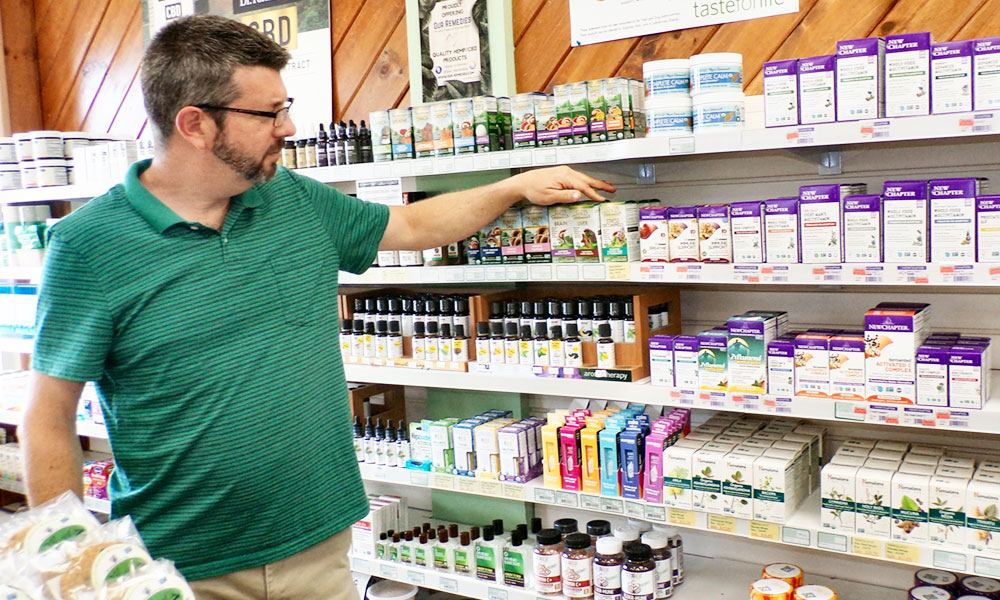 Natural health food store, with locations in Oswego and Fairmont, continues to post strong sales despite pandemic. They had more than $2.4 million in sales last year

For most businesses, COVID-19 was a scourge. However, for Green Planet Grocery it hasn’t really hurt business.

“COVID wasn’t that much of a problem for us. In fact, I’d say we were doing very well and continue to do so,” said Brent Lewis, owner. “People are more interested in eating well now. Because, you know, one of your best defenses against COVID is to be healthy, right? You need to have a strong immune system. We are still experiencing growth in sales; more new customers, at this time.”

“We did very well sales-wise during the pandemic. We also experienced no employee infection. We practiced all the usual abatement methods and reduced our hours of operation slightly. Our staff qualified for and was vaccinated early on,” he added.

They have two locations, one in Oswego, the other in Fairmount.

“We started Green Planet Grocery Oswego in 2004 [in the lower level of Mid-Town Plaza] after realizing it wasn’t always easy to source the highest-quality fresh, local and wholesome food in Central New York,” Lewis said.

The Oswego store investment was $200,000 and the Fairmount store, which is twice the size, cost $500,000 plus interest on the SBA seven-year loan.

“Oswego had no real problems breaking even; but building to significant profitability took several years, due in part to our poor visibility location, and maybe we were a little ahead of the trend toward natural and organic,” he said.

“Fairmount, it was a struggle to reach profitability because we didn’t have a lot of backup capital. Although we were profitable within 18 months, it was tough to survive.”

The Oswego store has been in its new location at Hillside Commons, 250 W. Seneca St. since December 2018. “It’s been about two and a half years. Time goes by pretty fast.”

They were thinking of going back to Mid-Town Plaza.

“But we’re very happy with this location. We’re close to the college. It’s really a nice location for us. Before, we were basically underground and invisible from the road. But, people knew we were there,” he said.

The business is called Green Planet Grocery because it is a grocery and a health store, according to Lewis.

“Most health stores only focus on supplements. They sell some food; a lot of it is grab-and-go stuff. We actually want to be a full-service grocery store. If people are interested in eating well, they can shop in our store and get most everything they want. That’s why we have such a selection of items; we offer an amazing depth of selection for such limited space. Supplements also account for about 40% of our sales.”

The stores carry Finger Lakes yogurt, milk and other dairy products. About eight or 10 local farmers provide produce to them.

“A lot of it is delivered up to the Fairmount store. Every Thursday, I bring down a load of mostly produce. I think that’s key to being a grocery store, you’ve got to have produce. You have to have a good selection,” Lewis said.

They have a bulk spice rack and other bulk products like nuts and oats, veggies, fruits, candies, ice cream, snacks; everything is natural or organic.

There is a freezer and fridge aisle, too.

It also features a lot of hypoallergenic bath products and many allergy-friendly foods like dairy-free, gluten-free options.

They’ve worked hard to build strong relationships with their vendors, which helps keep costs down so they can pass those savings on to customers, Lewis said.

“We have good hours of operation. We are open seven days a week. Our hours are not as extensive as pre-COVID. We used to be open until 9 o’clock. Now it’s a bit earlier (7 p.m.). Our prices are competitive, our service is outstanding,” Lewis said. “Eric [Mena, manager of the Green Planet Grocery in Oswego] has been with us since 2007. He is the face of our store here in Oswego. How many businesses have a manager that’s been with them for 13, 14 years? It’s a rarity. He’s a highly skilled individual. We have very competent people working for us. Most are drawn into the business because they can see how important good health is.”

“We offer organic and natural foods, these are foods that are certified. Organic foods have to meet certain growing standards. The soil has to be in a certain condition and you can’t use artificial products to help things grow; you have to use natural methods. It’s a rigorous standard,” Lewis explained.

People used to eat a more healthy diet, he pointed out.

“We’ve lost a lot of that over the years. People don’t eat good, fresh healthy foods like we used to. There were gardens all around; people ate a lot healthier,” he said.