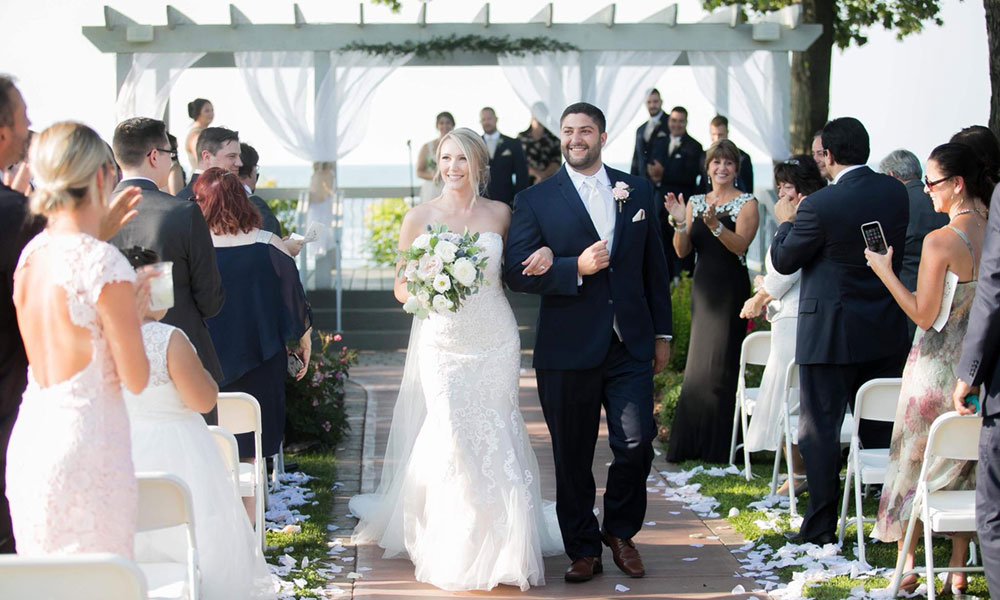 A wedding party of Gino and Selma Ruggio last year at Bayshore on the shore of Lake Ontario. This is one the few events that took place at the popular venue, run by Broadwell Hospitality Group. Approximately 80% of the weddings BHG had on the books this year were postponed and 5% were canceled. Photo of Marianne Natoli-Horning. 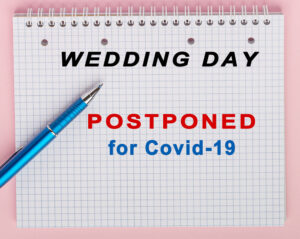 A nightmare scenario for anyone involved in a wedding — from the wedding party to even the DJ — is that either the bride or groom will have cold feet. Their nerves get the best of them and they pull the plug at the last minute.

While not a common phenomenon, it’s not unheard of. What is unheard of, however, is an entire season’s worth of brides and grooms getting cold feet.

Yet, that’s exactly what businesses in the wedding industry have been grappling with since the start of the year.

The spread of COVID-19 put weddings on hold when the state went into lockdown in March and later on when regions started to reopen, gatherings were capped at 50 people. A court ruling eventually expanded that to 50% of a wedding venue’s capacity, but the uncertainties and many state regulations prompted many couples to rethink their plans — some canceling altogether, others postponing, and a few deciding to move forward with their 2020 date, but with substantial changes.

It’s not just the wedding parties that are affected, though.

Hundreds of businesses in Central New York count on the revenue that the annual wedding season brings in, like the Broadwell Hospitality Group (BHG). It owns the wedding venues Bayshore on the shore of Lake Ontario and Alexandria’s, which utilizes the Lake Ontario Event & Conference Center at Oswego’s Best Western Plus located on the Oswego River.

“Financially speaking, it’s probably been as bad as it can be,” said John Sheffield, business development manager for the Lake Ontario Event & Conference Center. “Make no mistake; this has been a terrible year financially for all businesses that cater events. There is simply no making up for lost revenue. The only saving grace is that most of our New York state conferences and weddings have decided to postpone until 2021, and we will still have them but we, and those in our industry, have lost a year.”

Approximately 80% of the weddings BHG had on the books this year were postponed and 5% were canceled. Sheffield notes that even those weddings that have gone forward weren’t the same experience as originally planned due to the state rules that affect almost every aspect of the event. Fewer people are allowed to attend, guests must wear masks whenever they are not seated, hors d’ouevres stations are not being used anymore — even the buffet was impacted as only the staff are able to handle the shared utensils.

The situation has been no better for Springside Farm LLC, an agritourism farm in Fabius. The venue’s 5,000-square-foot Harvest Barn and bucolic scene make Springside a popular destination for weddings. Yet owner Paulie Drexler said that of the 21 that were on the calendar from March through September only two have taken place. Five celebrations were canceled and 12 have been moved to 2021. One bride even threatened a lawsuit because the state-mandated capacity limits interfered with her plans.

Drexler said in some ways, though, she’s more fortunate than others.

“We actually prefer to tell people that we’re a farm that hosts weddings, not the other way around,” Drexler said. “So, for some wedding venues this has been like, ‘Oh, my God!’ because it was their entire way they made income. We have alternatives.”

Springside enjoys an influx of visitors every fall for their pumpkin patch and corn maze and have thousands of trees ready for the picking this Christmas season, which Drexler says will “save her bacon” this year. Still, it’s hard to ignore the fallout from the pandemic.

Weddings provide a lump sum of several thousand dollars per event to venues and vendors. With cancelations, that money is gone. Drexler has even refunded some of the nonrefundable deposits couples are contractually obligated to pay. There’s also the drop in the total foot traffic this year that weddings bring to Springside each summer, which usually can be counted on to bring guests back for the pumpkin patch or Christmas trees later on. And then there’s the fact that even those weddings that were pushed to 2021 come with a cost.

“It’s impacted next year because we’re honoring the contract for this year’s prices,” Drexler said.

Jonathan Paduano, owner of Classy Cat Entertainment that provides DJ-ing and related wedding services, said postponements also take a spot that could have otherwise been used for another event.

“For those couples that have postponed to 2021 — a tradeoff of that is the postponement kind of takes over a day that we could have otherwise sold,” Paduano said. “So in that case, it is lost revenue. As an entertainment company, it’s definitely going to be a struggle monetarily.”

Rather than writing off the entire 2020 season, though, wedding industry businesses like Paduano’s are finding creative ways to fill the void.

Paduano said his company’s smartphone trivia game, which started as a way to entertain wedding parties during the rehearsal dinners, has now taken off as its own business. Classy Cats offers a live, virtual trivia night for businesses looking for ways to let their employees get together in a safe environment. Le Moyne College in Syracuse jumped on board as well to give students and even the school’s alumni a way to socialize while avoiding any spread of the coronavirus.

Perhaps the best thing about this new endeavor, Paduano said, is the additional exposure it gives to his business. Drexler is using the same tactic. She has rented out Springside out for group exercise classes this summer and started offering pancake breakfasts with blueberries that were grown on the farm. These events may just be “crumbs” compared to what a wedding brings in, she said, but the wedding business will eventually ramp back up and this puts Springside on the radar of every new visitor they can get on the farm.

“The exercise classes, for example, we just get a very low rental fee for the facility. We don’t charge much,” She said. “It’s good, but we put it in the category of maybe they’ll come back in the fall. Usually I credit that stuff to just another form of marketing, really, for other things.”

And even if the coronavirus does not disappear as suddenly as it arrived, weddings won’t cease altogether. Those in the industry are already experimenting with workarounds like catering their packages and prices to smaller events.

Paduano said couples are exploring new arrangements as well. He worked one wedding recently where the bride and groom decided to hold two marriage parties in one weekend. The celebration was repeated to ensure that their entire guest list was able to share in their special moment while still complying with the state-mandated capacity limits.

“It was a great idea, and it worked out exceptionally,” Paduano said. “They got exactly what they wanted and got to do it twice, which is not common. I mean, they’re one of a few rare people that can say they celebrated the best day of their lives two times. That’s just one of the creative ideas that are couples come up with.”

Sheffield also credits couples for how cooperative they have been. He said BHG’s relationships with its customers has actually strengthened this year due to the need for increased communication. But perhaps the most meaningful thing Sheffield said he has seen is how many couples moved forward with their vows in small ceremonies or at the courthouse, choosing to wait for the party. It’s a reminder that weddings are not just about extravagant affairs, but about the love they celebrate.

“All of these couples remaining true to their wedding plans has warmed our hearts on a personal level because this shows us that where these new couples are concerned, their commitment to one another is what is most important to them,” Sheffield said. “It speaks well of the human heart in times such as these.”

Preparing to Make a Splash