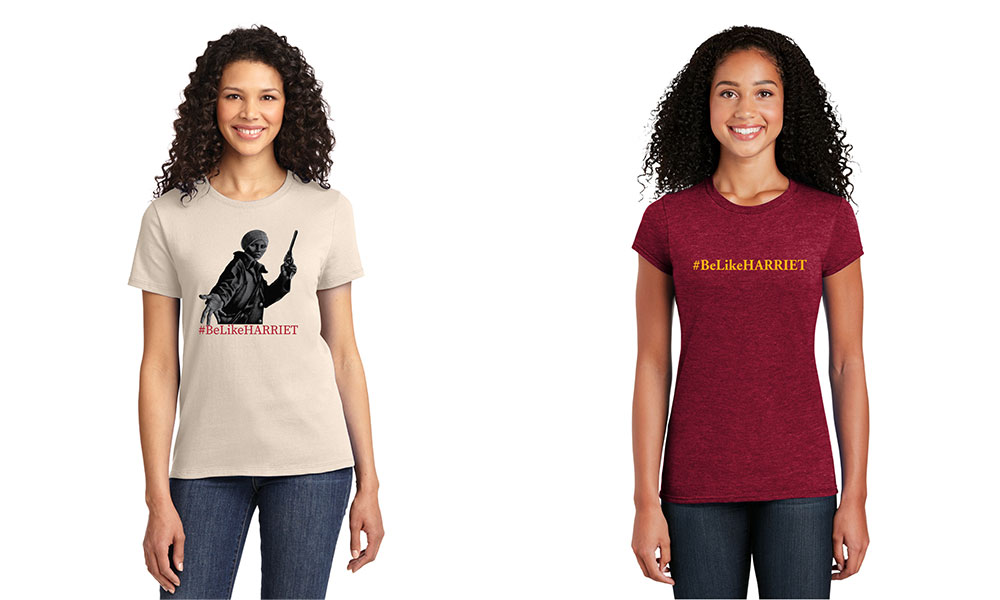 Models wearing samples of T-shirts marketed by Syracuse-based In Our Words Apparel.

Ashley McLeod and her mother, entrepreneur Gwen Webber-McLeod, betting on a new line of T-shirts that they say will inspire women

If Syracuse resident Ashley McLeod needs inspiration, she need look no further than her mother, serial entrepreneur Gwen Webber-McLeod, a public speaker who has founded a few companies, including Gwen, Inc., a business coaching firm.

The duo founded In Our Words Apparel (www.inourwords.net) which draws inspiration from other successful women, including Harriet Tubman.

“The idea to start it began two years ago when my mom asked a group of women about T-shirts to inspire women and wake up their ambition and help them with their self-esteem,” McLeod recalled. “I had two other business partners who have moved on. I decided to continue.”

Webber-McLeod said her daughter was always a visionary. She had cancer as a 10-year-old, and at one point, 97% of her bone marrow was malignant.

“She set a goal to survive,” Webber-McLeod said. “The lesson I learned is never doubt your daughter’s vision for her life, even if it seems crazy to you.”

McLeod enjoys the creative process that somewhat pulls her out of her comfort zone to not only express her hard-earned confidence but to encourage other women to become more confident.

After two years of organizing the business, the company launched in November of 2020.

McLeod said that her mother inspired her to take the role of director, as Webber-McLeod is both a woman of color and an entrepreneur.

In Our Words is a division of Webber-McLeod, Inc., which means McLeod can tap into the supports of her mother’s company as well as her wisdom. Webber-McLeod likes the model of sage women helping less experienced entrepreneurs build their business.

The current “Be Like Harriet” references Harriet Tubman, whom McLeod described as “a woman who was strong, brave and had faith.”

The “Black Women Matter” design was created in the wake of the “Black Lives Matter” movement.

McLeod said that although Brianna Taylor was killed before George Floyd, little mention was made of Taylor, along with other black women who died at the hands of police officers.

“Any woman who bought that shirt is standing with and for those women,” McLeod said.

McLeod acknowledges the contribution to her fortitude made by her grandmother, Barbara Webber. When her husband, Lt. Colonel Charles E. Webber, died in 2000, Barbara Webber felt that she needed to take his legislative seat in Jefferson County. She had taught several generations at Carthage City School. Despite her lack of political experience, she wanted to continue his vision for Watertown. After a special election, Barbara Webber was sworn in less than two weeks from when her husband died.

McLeod and Webber-McLeod both admire her strength in the face of tremendous adversity.

Despite starting her company mere months before the pandemic shut down the nation, McLeod said sales have been fine. She would rather grow steadily than too fast.

Each design is exclusive and will not repeat, which generates greater demand for each shirt. Graphic designer Shawn McCarthy works with McLeod to create each design.

“Our visions are to help the community to be better and do better,” McLeod said. “We have to get back to a sense of community. That’s what’s lost.”

McLeod expressed gratitude to Judi Dixon, the office manager, who keeps Webber-McLeod, Inc. and In Our Words humming.

Most of all, she feels grateful for her mother.

“It’s an honor to be my mom’s daughter,” McLeod said.

She said she has only realized how important her mother is now that she is a mom.

“It’s a journey of self-discovery when you look inside and you realize you are like your mother,” McLeod added. “You are your mom. I’m so honored to be in this place of knowing who I am and be able to be in this business model with my mom.”