Opened a little over two months ago, business has been an instant hit with customers, who form lines to buy baklava and other pastries

I stopped into Tatlim Bakery, 37 E. First St., Oswego, shortly after it opened the other day (March 9). There were more than a baker’s dozen customers waiting to place their orders. A few others were seated at the tables nearby.

“Yes, we’re having a slow day,” the owner Sevgi Evren Familo, 29, told me. “Most days, people are like sardines. They’re packed in so much you’re not able to see the floor. We open at 11 a.m. and we generally have a long line and an incredible crowd until 1:30 p.m. This is our slowest day ever.”

Not bad for a brand new business.

Evren Familo is an émigré from Istanbul. She has lived in the Port City for eight years.

“We opened on the 25th of February,” she said. “We serve locally roasted coffee from Recess in all of our coffee products (Turkish coffee, drip, cold brew and nitro). We brew all the coffee in the store.”

Cold brew is different than iced coffee, she pointed out.

“We actually brew the coffee for 18 hours, overnight,” she said.

The bakery ran out of baklava within two hours on opening day. “It was the very first thing that we ran out of,” Familo said. 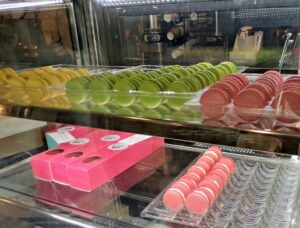 She said she isn’t a fan of American desserts. They’re too sweet; “it’s not my thing,” she explained. “I make things that I like … so I can eat them,” she added with a smile.

“For desserts, we serve different flavors of macarons and éclairs, as well as our crispy cream puffs and Turkish desserts, baklava and kadayif, and anything else I fancy to make that day… if I have time!” she said.

They are generally sold out of “goodies” by 1 p.m., she said, adding, “I rarely put extras in the case after that. But, sometimes we do, if we have enough time. We’ve been receiving an incredible amount of attention and love from the community and I’m so grateful for it.”

When she makes something, she wants to make it perfect.

“We are an artisanal bakery and make limited amounts of each item. I decide each flavor that day or the day before, depending on how much I like the fruits we have or the demands the customers made, or simply I just wanted to change things up a bit,” she said. “I make special flavors after 11 a.m. after our regular items are in the case.”

She has two full-time employees “who are amazing support and good friends and one part-time employee who is incredibly friendly and charming,” she said.

She offers a succinct explanation as to why the bakery is so popular so soon: “It’s good. We don’t compromise. I don’t want to sell something I wouldn’t eat,” she said.